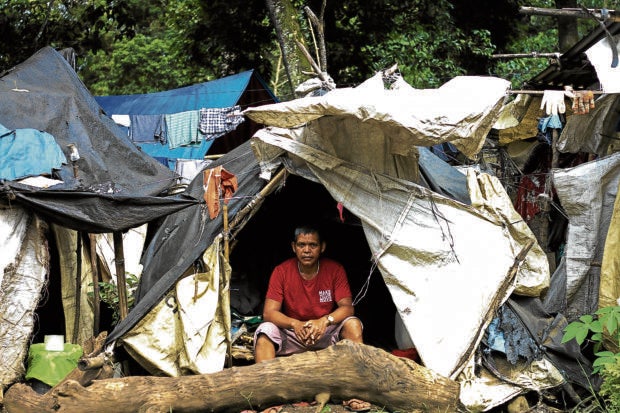 MAKESHIFT HOME Rolando Anglao, president of the Manobo-Pulangihon Tribal Association of Kiantig Butong in Quezon, Bukidnon, sits in his makeshift house in Barangay Kiantig Butong, just 10 meters away from their ancestral domain, in this photo taken in July. —JIGGER J. JERUSALEM

CAGAYAN DE ORO CITY—With four tribal groups laying claim over a single piece of land, the National Commission on Indigenous Peoples (NCIP) is nursing a headache over the question of whom to award the ancestral domain in Bukidnon.

The need to resolve the question has also delayed the return of close to a thousand families who were driven out of their community in Barangay Kiantig Butong in Quezon town in 2017.

The property in question is a 995-hectare land that was occupied and used by an agribusiness company on account of a Forest Land Grazing Management Agreement (FLGMA) it had with the Department of Environment and Natural Resources (DENR). The FLGMA expired in 2018 but the land is still being occupied by the Kiantig Development Corp. (formerly Cesar Fortich Inc.).

The Inquirer tried but failed to reach the officials of the company for comment.

The displaced tribal families have lived just outside the property since 2017.

Reymond Pimentel, head of the NCIP office in Bukidnon, said the group Kiantig Manobo-Pulangihon Tribal Association has submitted all the requirements to legitimize their ancestral domain claim over the land.

However, three other groups also petitioned the NCIP to be awarded ancestral domain rights over the land.

“This needs to be resolved first before our head office can issue the CADT (certificate of ancestral domain title),” Pimentel explained.

He said the NCIP will meet with all the claimants next week to resolve the issue.

Pimentel noted that the different claimants are actually just related to each other and that there are no conflict or violence between them.

“If we can establish that there is only one claimant, then the NCIP en banc can already begin deliberating the petition for CADT,” he said.

After being forced to leave the land in 2017, the Pulangihon families set up makeshift shelters on the side of the road outside of the contested property, with no running water, electricity and a stable source of livelihood.

Arnel Angcosin, secretary general of the association, said they rarely got help from the government even as their children were vulnerable to preventable sickness like diarrhea because they made do with contaminated water.

Angcosin added that parents had to tie ropes to their young children’s feet so they would not wander off the road and get hit by passing vehicles.

The situation began to turn in the tribe’s favor when the FLGMA expired in 2018 despite the land still being in the hands of a private company.

Angcosin noted that provincial environment and natural resources officer Vergilino Alima admitted in January 2019 that “the DENR has lost jurisdiction over the property” and pointed to the NCIP as the one “that has exclusive authority to manage and dispose of the abovementioned property.”

However, authorities have advised the tribe to wait until a CADT is issued so that they return to their community as rightful owners of the land.

Angcosin said that in a dialogue last month, the Bukidnon provincial government, the NCIP and the DENR assured the displaced families that actions had already been taken to facilitate their return to their claimed ancestral domain.

Pimentel said that if the multiple claims are resolved, they are targeting the issuance of a CADT before the year ends.