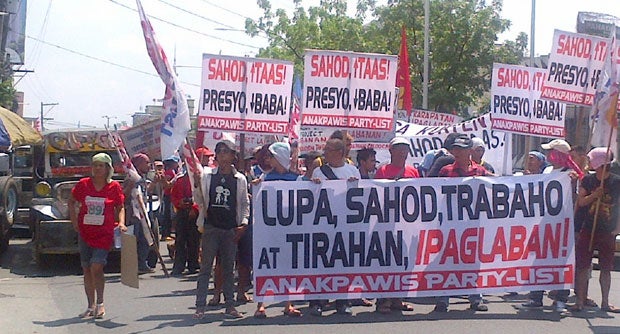 MANILA, Philippines—Joining and participating in rallies is not the same as taking part in an armed struggle, prosecutors said in dismissing the complaint filed by the Philippine National Police (PNP) and a mother of a student activist.

The PNP-Criminal Investigation and Detection Group (PNP-CIDG) together with the mother of “Trisha,” a senior high school student from the Polytechnic University of the Philippines (PUP), has filed a string of criminal complaints against Elaine Edzel Emocling, Christine Joy Dual from the League of Filipino Students (LFS), Kabataan and Alex Danday and Alfie Omaga of Anakbayan.

They were slapped with a complaint for Kidnapping and Failure to Return a Minor under the Revised Penal Code, violation of the Anti-Child Abuse Act, Anti-Trafficking in Persons Act of 2003, Special Protection of Children in Situation of Armed Conflict Act, and the Philippine Act on Crimes Against International Humanitarian Law, Genocide, and Other Crimes Against Humanity.

According to the complaint, Trisha participated in mass actions, one of which resulted in damage to school property. The police said Trisha was recruited when she was still a minor and “she was incapable of giving valid consent and hence, taken against her will.”

The police have also presented two former rebels who surrendered to the government, Maria Rebecca Pacayo and Edison Villanueva. The two testified that organizations such as Anakbayan recruits students to join the communist movement.

In their counter-affidavits, Danday and Omaga denied that Anakbayan was recruiting members for the Communist Party of the Philippines-New Peoples’ Army (CPP-NPA).

“Anakbayan is an organization which advocates the advancement of relevant social issues in a peaceful and legal manner,” Omaga said.

In dismissing the complaint, government prosecutors said the police failed to present evidence that Trisha was being held against her will.

“It is unclear from the statements given by [Trisha’s mother] as well as witnesses Pecayo and Villanueva, whether Trisha was being held against her will…It can be gleaned from the evidence on record that when she [Trisha] left home, she went on her own accord,” read the resolution.

It added that the police also failed to provide evidence linking Anakbayan with the communist movement.

“We cannot consider joining and participating in rallies and conducting peaceful assemblies as acts of armed struggle,” the panel of prosecutors stated.

It added that “there is nary any evidence to prove that Anakbayan or LFS is an armed group or that it recruits minors or children in order to participate in hostilities or armed struggle or to exploit them in preparation of armed confrontation or violence.”

Regarding Pecayo and Villanueva, who claimed to be members of LFS and Gabriela Youth, the prosecutors said they chose to join the NPA on their own, as well as to surrender to the government.