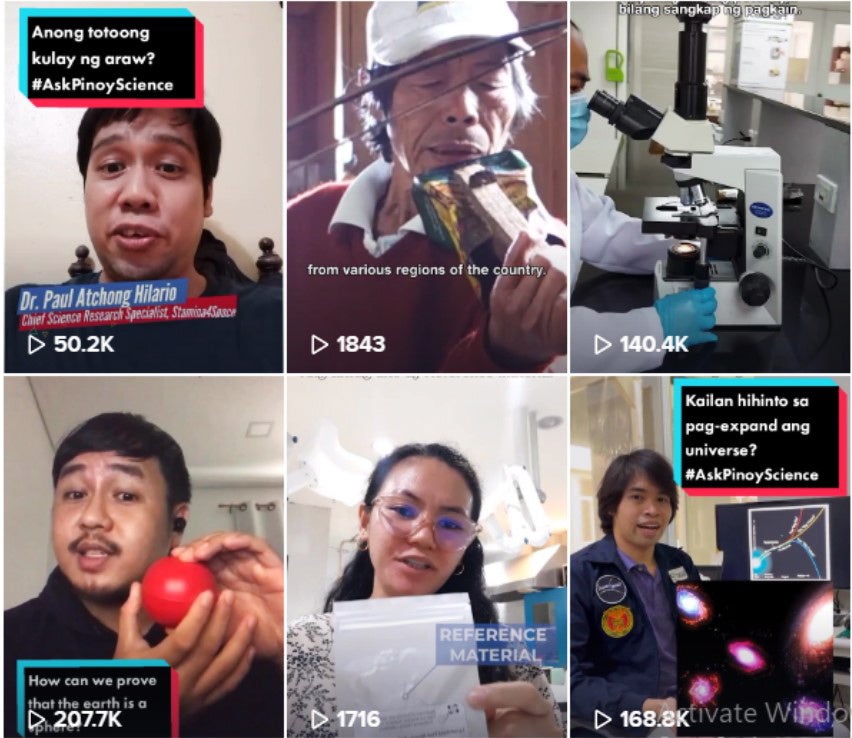 Learning science through TikTok? Why not.

The Department of Science and Technology (DOST) has launched a social media campaign called “Pinoy Science” through short video clips posted on the popular video-sharing app TikTok, with the aim of spreading basic information and knowledge, with special focus on Filipino inventions and pioneering research.

What is the true color of the sun? When will the universe stop expanding? How can we prove that the Earth is a sphere? These are a few of the questions answered in the video clips of the campaign by the DOST-Philippine Council for Industry, Energy and Emerging Technology Research and Development (DOST-PCIEERD).In one of the videos, a team of Filipino scientists showcases a neutron spectrometer they developed, which is made up of polyethylene spherical shells of different sizes and is used to measure neutrons with different energies.

Another clip shows the invention of Jeremy de Leon, a student from Mapua University who developed a prototype bagwis micro wind turbine that can convert wind energy into electricity.

The campaign recently made it as one of the top 50 finalists in an international science event hosted by Falling Walls and the Robert Bosch Foundation in Germany.

Falling Walls is a global science platform that features Science Engagement, a series of activities, gatherings and interactions that promote science communication projects in an effort to bridge the gap between science and society.

‘Breakthrough of the Year’

The DOST initiative stood out among 189 competitors from 80 countries and will be contending for a spot among the top 20. From that shorter list, the “Breakthrough of the Year” awardee will be selected and announced at the Falling Walls Conference in November, an event coinciding with the commemoration of the 1989 Fall of the Berlin Wall, one of the pivotal moments signaling the end of the Cold War.

“We thank Falling Walls for this recognition and we share this award with the game-changing innovations that our researchers come up with and share in this innovative platform. We thank TikTok for this partnership and giving us a channel to share to the world Filipino ingenuity,” said Enrico Paringit, the DOST-PCIEERD executive director.

The department said the collaboration with TikTok forged this year was intended to serve as an avenue to introduce science and technology and Filipino-made inventions through the social media platform.

The 50 finalists will be given the chance to access the Falling Walls Engage community and be part of physical and virtual events, including professional workshops with other finalists. The recognition will also allow the DOST team to boost their effort’s reach and visibility on an international level.

The jury and advisory board, composed of renowned scientists, communicators and consultants, are scheduled to pick the 20 winners in the coming weeks. —Jane Bautista