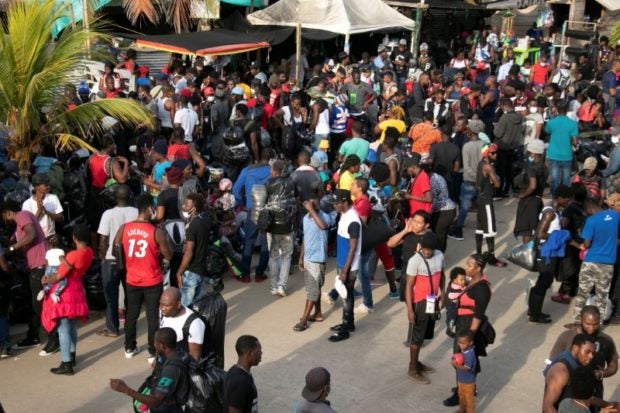 Migrants gather next to stores as they wait to cross into Panama to continue their journey toward the U.S., in Necocli, Colombia August 5, 2021. REUTERS FILE PHOTO

PANAMA CITY — Panama and Colombia agreed on Wednesday to receive up to 650 migrants each day, amid a humanitarian crisis at their shared border, where thousands of migrants are stranded in northern Colombia, waiting to continue north toward the United States.

Thousands of migrants – most of them Haitian but also from Cuba and various African countries – are stuck in Necocli, a remote resort on the Caribbean coast of Colombia, waiting for scarce boat transport toward Panama’s dangerous Darien Gap region, which many will cross on foot.

Many migrants were held back by COVID-19 border closures and have recently overwhelmed re-opened crossing points.

Panamanian Foreign Minister Erika Mouynes said the daily figure of 650 would be progressively reduced downward as the crisis abates.

“A staggered number was established downward, first, to address the crisis, from 650, and progressively towards 500 with specific days within which they can enter,” Mouynes told a news conference after a virtual meeting with officials from nine countries, including Colombia, the United States and Canada.

The agreement will be approved with Costa Rica, which also shares a border with Panama and through which migrants will cross as they head through Central America en route to the United States.

Mouynes said less than 1% of migrants who pass through Panama request asylum on the isthmus. Most of the migrants are Haitians and Cubans, but there are also Africans and Asians.

Colombia’s Migration Director Juan Francisco Espinosa said that the number of migrants in Necocli dropped to 3,000 on Tuesday from a high of 12,000 last week.

So far this year, a record of more than 42,000 migrants have arrived to Panama through Darien, with authorities expecting the figure will continue to rise as the borders reopen worldwide.