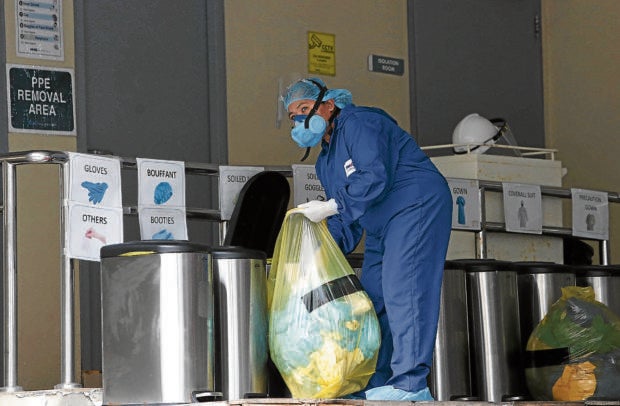 TOUGH JOB: A worker collects used personal protective equipment from a disposal bin at the emergency bay of a hospital in Makati City on Monday, as several medical facilities in Metro Manila deal with an influx of COVID-19 patients. (Photos by MARIANNE BERMUDEZ / Philippine Daily Inquirer)

MANILA, Philippines — The Philippines is now officially at “high risk” of being overwhelmed with COVID-19 cases, according to the Department of Health (DOH).

The DOH uses the average daily attack rate (Adar), or the number of people infected for every 100,000 population, as an indicator of the COVID-19 risk in an area. Classified as “low risk” are those with an average of less than one infection for every 100,000 population. Those with between one and seven infections are classified as “moderate risk,” while areas are considered “high risk” when the cases reach more than seven.

The DOH in particular flagged Metro Manila and six other regions as high risk due to the increase in cases, high average daily attack rate or the number of people infected out of every 100,000 population, and high hospital occupancy. The high-risk regions were the Cordillera, Ilocos, Cagayan Valley, Calabarzon (Cavite, Laguna, Batangas, Rizal and Quezon), Central Visayas and Northern Mindanao.

The DOH said last week it was already assuming a community transmission of the highly infectious Delta variant of COVID-19 and to date, such cases have been detected in 26 provinces and 29 cities—including all of Metro Manila—covering 13 of the country’s 17 regions, according to the DOH.

In Metro Manila, the cities of Malabon and Navotas and the town of Pateros were officially at critical risk while the rest were at moderate or high risk.

An average of 48 people died every day due to COVID-19 during the first week of August. The average daily deaths were 75 in July and 98 in June.

On Monday, 8,900 more cases were reported but the DOH admitted this was small due to lower laboratory reports last Saturday. The country’s total cases now stood at 1,667,714.

The DOH said COVID-19 cases were also increasing not only among children but across all age groups, with the highest increase observed among the 30-38 age group.

The lowest increase in cases was seen among those 80 years old and above.

Health Undersecretary Maria Rosario Vergeire also clarified that the DOH and its vaccine advisers were still studying whether to start vaccinating those 12 to 17 years old.

In Cebu City, the local government has transformed a portion of the Cebu City Sports Center into an isolation facility.

However, the Mega Stay-in Center, which has 150 beds, could not start operations yet since the city government still had to hire nurses and doctors.

In a post on Facebook, acting Mayor Michael Rama said the city was offering a monthly salary of P70,000 for doctors and P45,000 for nurses.

In a press briefing on Monday, Cebu City Councilor Joel Garganera said: “We are not in good shape. It’s alarming. I have talked with some of the infectious disease experts and they told me that we are just about to start the third surge.”

Local government data showed that from June to August, Cebu City recorded 7,576 new cases. The city also recorded 151 deaths, at least 50 of which happened in the first eight days of August.

Garganera said the occupancy rate of the 15 hospitals in Cebu City stood at 69.5 percent.

He said 296 beds were not being used due to a shortage of health workers.

At the Southern Philippines Medical Center (SPMC), the primary COVID-19 referral hospital in the Davao region, authorities were trying to add more beds and nurses.

Dr. Ricardo Audan, SPMC acting chief, said the hospital had increased its COVID-19 ward capacity to 519 beds and would be opening 44 more beds this month.

As of Sunday, only four of SPMC’s 92 beds in the intensive care unit (ICU) remained unoccupied although there were still 87 unused ICU beds in the region, most of them at Davao Regional Medical Center in Tagum City.

Audan also said he was confident that their new job order rates would attract more applicants. “From the P711 per day salary, we have increased this to P1,190 per day, with all the benefits and their hazard pay,” he said.

Audan said some of the hospital’s health-care workers had resigned because they were already being called by their employers abroad.

Hospitals and other health facilities in the provinces of Ilocos Norte, Pampanga and Tarlac were likewise overwhelmed by COVID-19 patients.

The Mariano Marcos Memorial Hospital and Medical Center in Batac City was facing a shortage of workers as 159 of its personnel had been infected with the coronavirus.

As of Monday, the COVID-19 bed capacity of the hospital reached 97 percent, said Dr. Rheuel Bobis, COVID-19 focal person of the DOH in the Ilocos region.

The entire Ilocos region has a 63.6-percent health-care utilization rate (HCUR) out of its 79 facilities as of Monday.

The provincial hospital of Ilocos Norte in Laoag City and the Laoag City General Hospital reached a critical risk capacity and were also running out of beds. Both hospitals were already over 90 percent occupied.

In Dagupan City, at least 89 of 120 beds dedicated to COVID-19 patients at the Region 1 Medical Center were already occupied, said Dr. Roland Mejia, chief of the hospital. But he said 70 beds would be added to the city’s capacity in September.

In Central Luzon, 59 percent of COVID beds in its 173 health facilities had already been occupied.

In Pampanga alone, only 20 percent of the beds dedicated to COVID patients in 47 hospitals and medical facilities in the province remained vacant.

In Tarlac, only eight of 37 ICU beds in the province remained available.

In the Cordillera, where two Delta variant cases have been recorded, the regional HCUR was classified as low risk as of Aug. 8.

—WITH REPORTS FROM INQUIRER BUREAUS