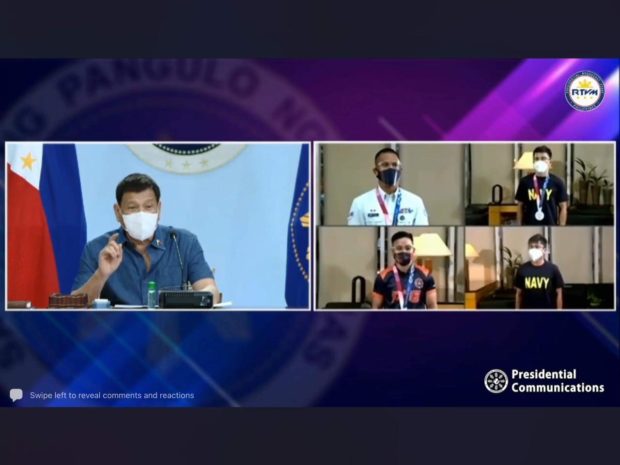 In a courtesy call with Filipino athletes on Monday, Duterte said Olympic silver medalists for boxing Carlo Paalam and Nesthy Petecio will receive P2 million each from his office.

This is on top of the reward mandated by law where olympic silver medalists are set to take home P5 million while bronze medalists will get P2 million.

All of the medalists will likewise receive the Order of the Lapu-Lapu medal, which is given to Filipinos “who have excelled in something and brought honor to the country,” Duterte said.

All Filipino athletes who participated in the Tokyo Olympics will get P200,000 from the Office of the President, as well as Presidential Citations, Duterte added.

“It is not an everyday occurrence that we receive such an honor from our citizens of the Republic of the Philippines. You went to Tokyo to fight and I, well, say that you did your best and the Filipino people appreciate it, especially bringing honor to the country,” Duterte said.

Duterte earlier pledged to give Olympic gold medalist Hidilyn Diaz cash amounting to P3 million as well as a house and lot in a government housing project for soldiers in Zamboanga City.

Read Next
Ombudsman: Suspension vs 7 cops over illegal arrest of suspects in Bohol town mayor’s slay
EDITORS' PICK
A delightful blessing!
Gov’t plans to open COVID-19 vaccination for 5- to 11-yr-olds by January 2022
Gov’t eyeing COVID-19 vaccine booster for essential workers, indigents by Dec. 10
Villar Group gears up for AllValue Shopping Party on Dec. 3; around P 1-million promos and discounts up for grabs
Omicron variant detected in more countries as scientists race to find answers
Legarda: Ending Violence Against Women, a cause for all
MOST READ
Omicron poses ‘very high’ global risk, countries must prepare–WHO
Quiboloy warns of ‘much worse than Omicron virus’ if his ‘persecution’ is not stopped
Bongbong Marcos’ conviction in tax case not a crime involving moral turpitude — lawyer
Marcoleta defends pol ads on ABS-CBN
Don't miss out on the latest news and information.