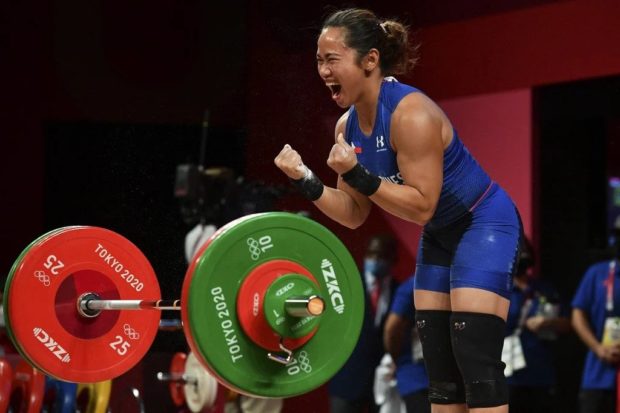 Philippines’ Hidilyn Diaz reacts while competing in the women’s 55kg weightlifting competition during the Tokyo 2020 Olympic Games at the Tokyo International Forum in Tokyo on July 26, 2021. (Photo by Vincenzo PINTO / AFP)

MANILA, Philippines — President Rodrigo Duterte on Wednesday pledged to give Olympic gold medalist Hidilyn Diaz cash amounting to P3 million as well as a house and lot in a government housing project for soldiers in Zamboanga City.

These are on top of the P10 million reward that she stands to receive by virtue of law, a presidential medal of merit, and other pledges from the private sector.

Diaz paid a courtesy call on Duterte via teleconference after she arrived in the country from Tokyo, Japan, where she clinched the Philippines’ first Olympic gold medal.

READ: Away for over a year, golden girl Hidilyn Diaz finally home

“Now, Hidilyn, the following are what is due you, kasi you are a member of the Armed Forces at alam mo naman may mga housing projects ako for soldiers…I’m going to give you one fully furnished, furnished na, it’s a house and lot in Zamboanga City,” Duterte told Diaz.

(Hidilyn, the following are what is due to you because you are a member of the Armed Forces and you know that I have housing projects for soldiers. I’m going to give you one fully furnished house, already furnished, it’s a house and lot in Zamboanga City.)

Diaz, an active enlisted personnel at the Philippine Air Force Civil-Military Operations Group, has also just been promoted to Staff Sergeant following her victory in the Tokyo Olympics.

(In addition to what the law gives you, I will give you P3 million. P3 million coming from me, P10 million from the government. You’ve been blessed by God. It’s neither a big nor a small amount. This will go a long way to help your family.)

In response to the President, Diaz said: “Thank you so much po, President. Thank you po.”

Diaz ended the Philippines’ drought for a gold medal in the Olympics after setting a record of a total lift of 224 kilograms and winning the women’s 55 kilograms weightlifting competition in Tokyo.

Because of her victory that propelled Filipino pride, she is set to receive prizes worth over P35 million, including the P10 million mandated by the National Athletes and Coaches Benefits and Incentives Act signed in 2015 by then-President Benigno S. Aquino III.