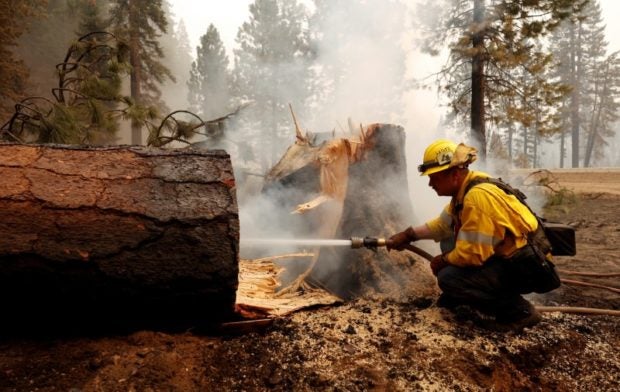 A firefighter extinguishes a fire in the base of a tree that was cut down while fighting the Dixie Fire near Chester, California, U.S. August 7, 2021. (REUTERS)

A raging wildfire in northern California is now the second-largest recorded in state history, officials said on Sunday, days after the blaze destroyed a historic gold rush town and forced the evacuation of thousands.

Only the August Complex Fire of August 2020, which consumed more than 1 million acres, was bigger.

Thus far, no deaths have been attributed to the wildfire. There were five people missing as of Saturday afternoon, according to the Plumas County Sheriff’s Office; two of themhad been reported safe, though officials were still working on confirmation at the time.

The fire is threatening nearly 14,000 structures, officials said, and has already destroyed more than 400, including virtually all of downtown Greenville, an old mining town about 160 miles north of Sacramento.

The cause of the fire remains under investigation. Pacific Gas & Electric has said it may have started when a tree fell on one of the utility’s power lines.