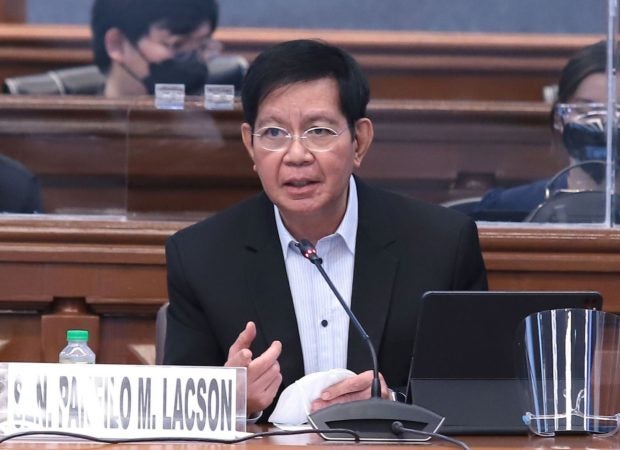 FILE PHOTO: Senator Panfilo Lacson during the hybrid inquiry of the Committee of the Whole on the food security crisis brought about by the outbreak of the African swine fever (ASF) on April 27, 2021, as well as the list of importers who were issued and allotted the unused MAV. (Albert Calvelo/Senate PRIB)

MANILA, Philippines — The denial of the Philippine National Police (PNP) on the alleged misuse of the National Task Force to End Local Communist Armed Conflict (NTF-Elcac) funds should put a stop to census operations in different barangays amid the approaching 2022 elections, Senator Panfilo Lacson said Saturday.

According to Lacson, such a survey of a community or population is “illegal.”

“The PNP’s denial should put a stop to the illegal data gathering activities on 30 percent of the country’s local population,” Lacson said in a tweet.

“As the Senate’s principal sponsor of the NTF-Elcac budget, I cannot simply disregard a pattern of such reports coming from their own field commanders,” he added.

The PNP’s denial should put a stop to the illegal data gathering activities on 30% of the country’s local population. As the Senate’s principal sponsor of the NTF-ELCAC budget, I cannot simply disregard a pattern of such reports coming from their own field commanders.

Lacson earlier disclosed that a police general is allegedly using a portion of the anti-insurgency budget to instruct the listing of names among barangay residents—a claim that the PNP denied.

Also previously, the senator said he received reports that the PNP share of P800 million under the NTF-Elcac fund as a member agency is being used to conduct a “census” of 30 percent of a barangay’s population.

He said this activity is “suspicious” as it seems that the move could be related to the national elections next year.

“The PNP is not conducting nor instructing our chiefs of police to ask 30 percent of barangay residents to give their names, contact numbers, and addresses for a census. We have no use for any census,” Eleazar said.