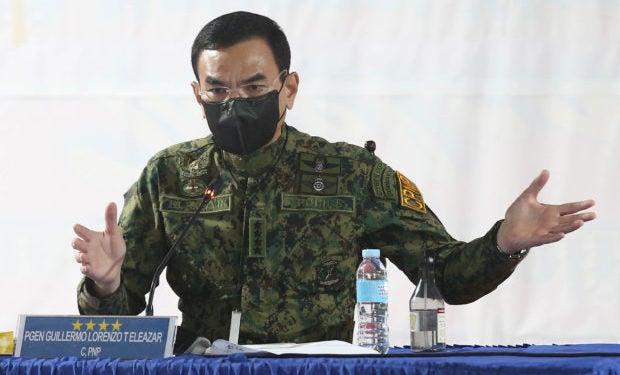 The Philippine National Police has “categorically and vehemently” denied allegations that it misused the funds of the National Task Force to End Local Communist Armed Conflict (NTF-Elcac) to conduct census in different barangays allegedly for the upcoming elections. “The PNP is not conducting nor instructing our chiefs of police to ask 30 percent of barangay residents to give their names, contact numbers and addresses for a census. We have no use for any census,” Gen. Guillermo Eleazar, chief of the PNP, said on Friday. Eleazar was reacting to the allegations of Sen. Panfilo Lacson that he had received reports that a police general had ordered a census among barangays using the P800-million share of the PNP in the controversial NTF-Elcac budget. Lacson, chair of the Senate committee on national defense and security, warned that he would join calls to scrap the P40-billion proposed budget of NTF-Elcac for 2022 should there be a misuse on the funds. Eleazar said the PNP “[welcomes] any investigation that may be conducted.” —Dexter Cabalza