‘Weapon of war’: the U.S. rifle loved by drug cartels and feared by Mexican police 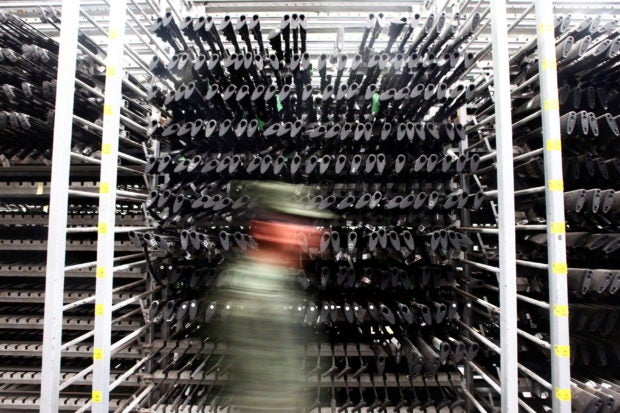 FILE PHOTO: A soldier walks in front of arms confiscated by national security authorities inside the deposit of weapons at a military zone of Mexico City on April 17, 2013. REUTERS/Edgard Garrido/File Photo

MEXICO CITY — The flow of high-caliber arms smuggled across the porous U.S. border has alarmed Mexican officials and few weapons are as powerful as the U.S.-made M82 semi-automatic rifle increasingly favored by the powerful drug cartels.

The M82 can easily penetrate bulletproof vests, concrete walls, and even tanks, says its manufacturer Barrett Firearms. It is also one of the weapons of choice for drug cartels, according to the Mexican government, which this week filed a lawsuit in the U.S. District Court in Massachusetts against the company and 10 other gun manufacturers.

Weapons such as the M82 are part of a “torrent” of illegal arms flowing south, Mexico alleges, partly due to the manufacturers’ negligent business practices that had encouraged illegal arms trafficking.

None of the manufacturers, including Barrett, responded to Reuters’ requests for comment.

First manufactured in the 1980s, the M82 rose to prominence during the first Gulf War when it was adopted by the U.S. military. Now it’s used by more than 70 security agencies across the world, according to Barrett.

In Mexico, the weapon has disrupted the balance of power between criminal groups and poorly equipped police forces, according to Romain Le Cour Grandmaison, Program Director at the Mexico and Central America Office of Noria, a think tank.

“If you have a Barrett, it means that any non-special forces such as the local police and the municipal police cannot fight you,” Grandmaison said.

“That leaves the military as the only ones able to battle the cartels.”

The M82 guns, often fitted with a scope to act as a sniper’s weapon, can fire 70 rounds per minute with a maximum range of 2,500 meters.

Between 2009 and 2020, authorities seized 358 M82 rifles, according to official figures cited by the Milenio newspaper. In 2019, a record 68 such weapons were captured.

The raw power of the rifle, which weighs about 14 kilograms (31 lb) and is 1.5 meters long, was on show in mid-2020 during a military-style assassination attempt on Mexico City’s police chief that was captured by surveillance cameras.

Gunmen who left behind at least one M82 rifle were seen spraying the armor-plated car of police chief Omar Garcia Harfuch with high-velocity rounds. He was badly wounded, while two bodyguards and an innocent bystander were killed.

In 2016, members of the “Knights Templar” cartel in Michoacan state allegedly downed a helicopter with an M82 rifle, the Mexican lawsuit said.

The Barrett M82 was a “serious problem” for security forces because its armor-piercing bullets can knock out the motors of reconnaissance vehicles and endanger helicopters, said a Mexican official, who spoke on condition of anonymity.

The gun should not be in the hands of civilians, the official said.

“It’s a weapon of war,” added the official.

For the cartels, the M82 has also become a status symbol.

“It’s a very symbolic weapon in the narco world and for the narco aesthetic,” Grandmaison said.

“It shows you’re on top of the game.”