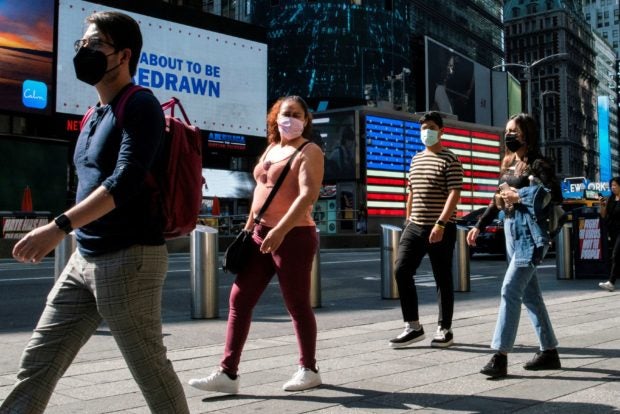 TIMES SQUARE, New York City–Many of Wall Street’s biggest banks are sticking by their decision to make employees return to the office in the coming weeks even as public health officials’ warnings about the aggressive Delta variant of the coronavirus are prompting some firms to rethink their plans.

The variant is sparking fears even among vaccinated professionals that they might be bringing home harm to unvaccinated children and others after a day at the office. This has created pressure for law firms, financial service companies and others to re-evaluate, lawyers, bankers and investment managers said.

Wells Fargo & Co has pushed back its return-to-office date to Oct. 4 and BlackRock Inc, the world’s largest asset manager, is delaying its return date by one month, to October, representatives of the companies said. Law firm Akin Gump Strauss Hauer pushed its date to Oct. 11 from Sept. 13, it said.

The shifts were announced this week amid growing concerns over increased danger due to the new variant.

“By making us come back to the office, you are essentially putting our families and children at risk,” said one person on a financial services company’s firm-wide conference call where employees could ask questions and air potential grievances about returning to the office, according to another participant who was on the call and spoke with Reuters.

Manhattan or the suburbs?

Wall Street employers are divided on the issue. After hastily adapting to working remotely as the pandemic spread last year, many firms are ready to bring their staff back, if only for a portion of the week. For many that means a return to commuter trains and high-rise office buildings’ elevators starting next month.

But some are now resisting, arguing that life in the suburbs can be just as productive for business as it is for life after hours. Indeed the New York suburbs are quickly developing into outposts to do business deals whether at outdoor restaurants, the beach or a lake, people said.

“A lot of people are not commuting into the city right now and so the New York suburbs have become a new meeting place that never existed before but where you can efficiently arrange a lot of face-to-face meetings now,” said Jonathan Litt, whose hedge fund Land & Buildings Investment Management concentrates on real estate.

“You drive 10 minutes, have lunch and then you go home,” said Litt, whose hedge fund moved out of Manhattan to nearby Connecticut more than a decade ago.

Some lawyers and bankers have told colleagues they would not be returning to their Manhattan offices in the foreseeable future for fear of catching the highly transmissible new strain and carrying it home to children under the age of 12 who have not been cleared to receive the COVID-19 vaccine.

Some of the bankers, lawyers and investment managers who spoke to Reuters said the mood among many parents of young children has changed in the last few days. It is the latest twist in a saga that began with many professionals fleeing their New York offices in March 2020 only to make a tentative return earlier this summer.

The shift coincides with New York Mayor Bill de Blasio’s call on Tuesday that all people who wish to eat indoors at restaurants, exercise at gyms or see performances in New York must soon show that they have been vaccinated.

“I thought we were past this and things were getting better, but they are clearly not,” said another executive, who like the half dozen contacted for this story asked not to be identified for fear of angering his employer.

At the major banks, the policy for now is to adhere to the previously charted course, with some taking a harder stance on vaccines.

Morgan Stanley’s staff and clients will not be allowed to enter the bank’s New York offices if they are not fully vaccinated, a source said.

Goldman Sachs has had a vaccine status reporting requirement in place since June 10, a spokesperson said, adding that unvaccinated individuals are required to submit to regular, weekly testing and wear a mask.

A banker at JPMorgan Chase & Co told Reuters “fear is rising,” but speculated that the bank will not make any changes after CEO Jamie Dimon was among the first senior executives to bring back his workforce. JPMorgan declined to comment on any changes to its back-to-office plans.

The largest U.S. bank has brought back employees in the United States to the office on a rotational basis from July.