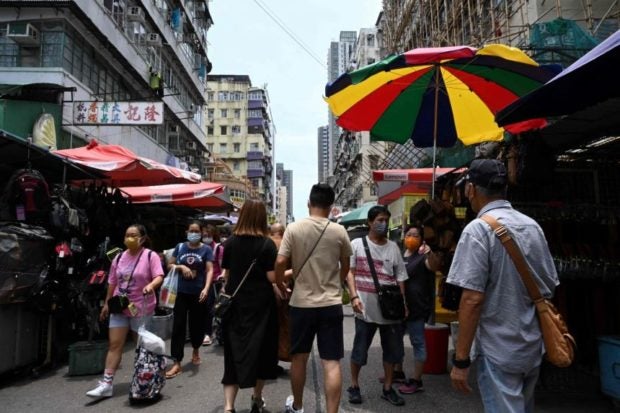 HONG KONG — Hong Kong has ended its two-month streak of not having a local Covid-19 case, as it steps up surveillance to also prevent imported cases from mainland China and Macau.

In a statement issued on Thursday (Aug 5), the Center for Health Protection (CHP) said the city has recorded one new local case – a 43-year-old welder – and another five imported cases.

The CHP said the man had tested negative under the regular testing requirement since May this year.

“After admission to hospital on August 3, the patient tested positive for antibody against Covid-19,” it said. “After examining the epidemiological, clinical and laboratory findings, this case is compatible with a re-positive case previously undiagnosed”.

A re-positive case is a patient who previously recovered from Covid-19 and is tested positive again.

The health authorities said on Wednesday that the unvaccinated man lives in Sham Shui Po, works in Wan Chai and has no recent travel history.

They also said that a 13-year-old girl and her family would be quarantined after they found the child to be a close contact of a patient in Macau who came down with the Delta variant.

The girl and the Macau patient had gone on a dancing trip in the Chinese city of Xi’an last month. She returned to Hong Kong on Monday and tested negative on Wednesday.

Overnight, the authorities locked down a Sham Shui Po block of flats and a Tsim Sha Tsui hotel to get residents there tested. These are places linked to the construction worker and the two new imported cases reported on Wednesday. No Covid-19 case was detected.

The government also issued compulsory testing notices for 22 locations, including two construction sites in Wan Chai, a Fairwood restaurant in Shek Kip Mei, a Wellcome supermarket in Jordan and the Immigration Tower.

But on Wednesday, Hong Kong tightened border controls to insulate itself from the worsening Covid-19 situation on the mainland.

The city suspended quarantine exemptions for residents returning from the mainland, with the exception of Guangdong province. The seven-day quarantine for fully vaccinated people no longer applies. They will serve 14 days in home quarantine.

Under the quarantine exemption scheme named Return2HK, up to 6,000 residents could return to Hong Kong daily from the mainland without having to go through mandatory quarantine.

Also on Wednesday, the government’s decision to list Macau as an at-risk place took effect.

Individuals who have been in Macau on the day of arrival in Hong Kong or during the 14 days before that day will have to undergo a 14-day home quarantine and be subject to several tests.

The decision came after a family of four in Macau – the patient who went to Xi’an as well as her parents and brother – were found to be carrying the Delta variant, ending the city’s virus-free record of about 16 months.