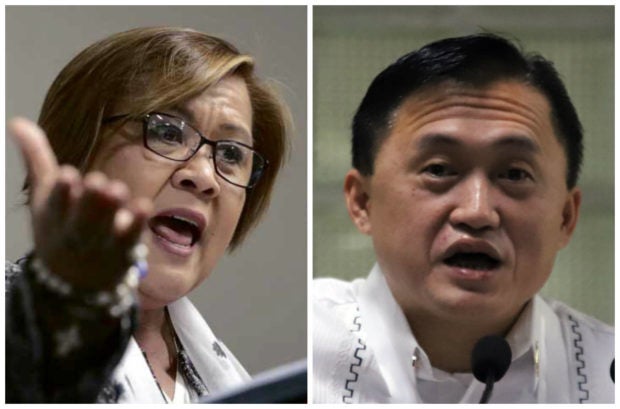 In filing Senate Resolution No. 809, De Lima said the upper chamber should look into the circumstances surrounding these “controversial transactions” to determine whether plunder or violations against the anti-graft and corruption law were committed.

Go, in response to De Lima’s resolution, said he welcomes any corruption investigation.

(What’s important is that the truth comes out. I respect the right of my fellow senator when it comes to this. It’s up to the Senate if they want to consider the resolution.)

Go said he has nothing to hide, adding he would resign should it be proven that he stole “even a single peso” from public funds or has benefited from any government project.

(As I’ve said before, if it’s proven that I stole even a single peso from public funds or have benefited from any government project, I will resign.)

The bulk of this amount, according to Trillanes, was from government contracts secured during the Duterte administration’s first two years.

De Lima said the Senate should investigate the allegations of conflicts of interest in the reported awarding of government contracts to the kin of public officials in order to identify and eliminate possible corruption in the implementation of infrastructure projects.

“It is imperative to verify whether acts that amount to taking undue advantage of one’s official position, authority, relationships, connections, and influence to the damage and prejudice of the people, have been committed in the Desiderio Go and Alfredo Go contracts with government,” she said.

“Close family relations were involved in possibly accessing influence from the highest office of the land, further considering that both contractors’ son and brother, respectively, is known to be the closest political associate of the Chief Executive who has direct control and supervision over the DPWH (Department of Public Works and Highways) as implementor of the contracted projects,” she added.

It was in 2018 when the Philippine Center for Investigative Journalism (PCIJ) first reported on the government contracts secured by the two companies owned by Go’s father and half-brother.

It was again brought to the public’s attention after Trillanes, in a video uploaded just last July, detailed the contracts secured by the companies of Go’s father and half-brother.

Both Malacañang and Go have already dismissed Trillanes’ allegations, saying they were “rehashed.”

“It behooves the Senate [t]o perform one of its key functions as legislative oversight and investigate such claims so as to ensure that these contracts were awarded to the CLTG Builders and Alfrego without the undue interference of close relatives in public office who have direct access to, and exercise unquestioned influence over the Chief Executive, the latter having the final say in said contracts,” De Lima went on.

De Lima, in her resolution, likewise stressed the need to investigate the problems arising from simulated joint ventures (JVs), citing the DPWH’s supposed lack of monitoring procedure in terms of actual participation of parties.

“While the parties are allowed to agree upon the terms of JVs, the law should ensure that the credentials that qualified the JV are indeed present during the implementation of the project. Legislation must be introduced to ensure that all members of JVs are held responsible for the delays and any shortcomings in the implementation of the infrastructure projects,” De Lima said.

“It is vital for public accountability to ascertain whether gaps in the law as they are presently written have been used to circumvent the policies behind them to the detriment of the public,” she added.