US ready to take in thousands more Afghans as violence worsens 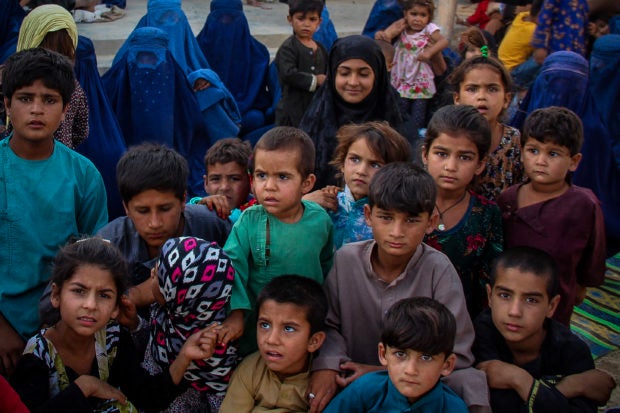 In this file photo children from the Internally displaced Afghan families arriving from districts of Khan Abad, Ali Abad and Imam Sahib who fled due to the ongoing battles between Taliban and Afghan security forces, look on inside the premises of a school in Kunduz city on June 26, 2021. AFP

WASHINGTON — The United States said Monday it was ready to take in thousands more Afghans whose US links put them at growing risk but acknowledged an arduous path ahead for its allies as Taliban insurgents make gains.

Less than a month before the United States is set to end its longest-ever war, the State Department broadened refugee admissions beyond the roughly 20,000 Afghans who have applied under a program for interpreters who assisted US forces and diplomats.

“Afghans who worked with the United States or the International Security Assistance Force at some point since 2001 are facing acute fears of persecution or retribution that will likely grow as coalition forces leave the country,” Secretary of State Antony Blinken told reporters.

“We have a special responsibility to these individuals. They stood with us. We will stand with them.”

But he conceded the tough task ahead for asylum-seekers who first need to leave Afghanistan on their own and in most cases must wait more than a year for visa processing.

“As we see again and again, people have to do very difficult things to make sure that they can find safety and security, and we will do everything we can to help them, including making these different avenues of arrival to the United States for this group of people possible.”

Blinken said the United States will also let in more Afghans who served as interpreters or in other support roles to forces of the US-led coalition but did not meet earlier requirements on time served.

A second flight of 400 Afghan interpreters and their families arrived Monday in the United States, Blinken said, after 200 landed on Monday as part of what has been dubbed Operation Allied Refuge.

Long road to US

Unlike with the interpreters, the United States said it had no immediate plans to fly out the newly eligible Afghans even as the Taliban seize a growing number of border areas.

The applicants cannot seek directly to come to the United States but need to have referrals by their current or former employers. Once they make it outside Afghanistan, processing will take one year to 14 months, a US official said.

Another US official said that Washington, while not helping the new applicants escape, has asked other countries including Pakistan to keep their borders open to them.

But Pakistan was the historic backer of the Taliban and has also seen violence against Afghans, especially from the Hazara Shiite minority. Just Monday, the United States and Britain jointly accused the Taliban of massacring civilians in a town they recently captured on the Pakistani border.

The other major recipient of Afghan refugees is Iran, which has no diplomatic relations with the United States. The second US official said that potential applicants had started moving on from Iran to Turkey, already the temporary home to millions of refugees from Syria.

The State Department is designating the new refugees under so-called Priority 2, the same level given to persecuted minorities from a number of countries.

President Joe Biden has ordered a withdrawal of remaining US troops by the end of the month despite fears for the stability of the internationally backed government.

He insists that the United States has done all that it can and long ago accomplished its stated mission of eliminating al-Qaeda extremists who carried out the September 11, 2001 attacks.