Best tribute to PNoy: Stop being passive, speak up on issues – Robredo 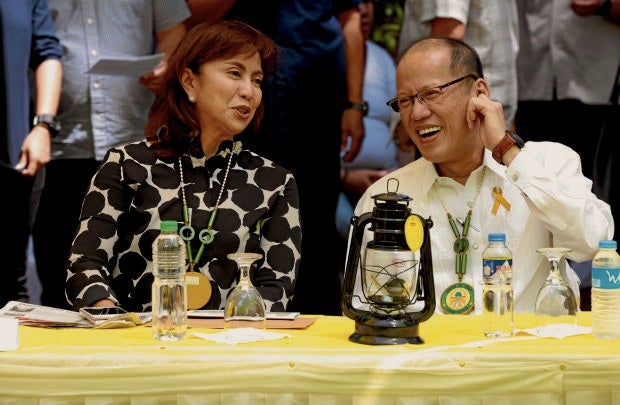 MANILA, Philippines — The best tribute that people can give to the late former President Benigno “Noynoy” Aquino III is to stop being passive observers and speak up on various issues, Vice President Leni Robredo said in a statement issued on Monday.

It was the 40th day since the death of Aquino, and Masses were celebrated to commemorate the milestone.

“This may be the most beautiful tribute that we can give PNoy: To look for the inner strength to stand up and forge the kind of Philippines that he had dreamed for us,” Robredo said in Filipino. “We are the Boss. We have the power. We are not just passive observers in a democracy, but we have the responsibility to get involved.”

“Each one has enough light with which to see the next steps towards a better tomorrow. This had been PNoy’s belief right from the start. This is were we draw our strength now, and this is where we will draw strength in the coming days,” she added.

According to the vice president — whose late husband Jesse Robredo served as secretary of the Department of the Interior and Local Government during the Aquino administration — remembering Aquino’s life raises many questions.

“This day, as we remember the life of one PNoy, we also face questions: What can we do, right here and now, to continue what he started? What else can we possibly achieve to reach our bigger goals? We are the boss. So how do we prove ourselves worthy of being called boss by a man such as he was? How will we respond?” Robredo said.

“The answers may also be in each one of us: They are in our responses, in our daily decision-making and actions, in what we choose to fight for, in how we do charity work and how we interact, in how we help those whom we can help. Our answer is to remind each other that no Filipino should face any fight alone,” she added.

Last June 24, the second eldest Aquino sibling, Aurora Corazon “Pinky” Abellada, confirmed to the public that the former president died peacefully in his sleep before being rushed to the Capitol Medical Center.

According to Abellada, the death certificate puts Noynoy’s time of death at 6:30 a.m —. due to renal disease secondary to diabetes.

Aquino’s health had already been a central topic of conversations even while he was the sitting president, as he was known for being a chain smoker and a fan of fatty food and sweet drinks.

However, the rumors spiked after he stepped down from office. In the eulogy for Aquino, former Energy Secretary Rene Almendras, a friend of the president, confirmed that the former leader flatlined on one occasion during a minor health procedure.

While Aquino’s term has earned praises for instituting anti-corruption policies and standing up against China’s intrusion in the West Philippine Sea, it also drew flak for several issues like the slow disaster response after Super Typhoon Yolanda, the killing of indigenous people and peasant leaders, and the death of 44 Special Action Force commandos during an operation in Maguindanao to arrest terrorist bomb-makers.

The widespread condemnation of Aquino’s administration resulted in an overwhelming victory for President Rodrigo Duterte, who presented himself to be an anti-thesis of former Interior Manuel “Mar” Roxas II, the Liberal Party bet and another Aquino friend.

Over the years, Aquino became the target of several attacks on social media, depicting his administration to be a failure.

Robredo said, however, that Aquino was still very much “worth fighting for ”— borrowing a favorite of the late former president that he had in turn taken from his father, the late former Sen. Benigno “Ninoy” Aquino Jr.

“You are our guide. You are the source of our inner strength. You can hope for this: We will not fail you,” she added.

Read Next
Gov’t tricking people by vowing lockdown aid without knowing where to get it — Bayan
EDITORS' PICK
Court of Appeals junks Mandaluyong’s ‘riding-in-tandem’ ordinance
Legarda emphasizes role of ICC/IPs in nation building this IP month
Jordan Clarkson hits 8,000 career points, faces Jalen Green next
Work-From-Home is here to stay and requires reliable logistics
Climate Change Commission and Nestlé PH to discover sustainability-focused solutions
Cusi: PDP-Laban convincing Duterte to run for senator in 2022 polls
MOST READ
Don’t do that: Robredo to supporters calling to boycott restos supportive of Marcos
Marcos Jr’s ‘special diploma’ from Oxford: You can have it, too
Bongbong Marcos camp eyeing Pacquiao, VisMin bets as VP options — Imee
OVP spox to Imee Marcos: Robredo is an extraordinary lawyer
Don't miss out on the latest news and information.