Only APORs allowed to leave, enter NCR Plus since Sunday — DILG 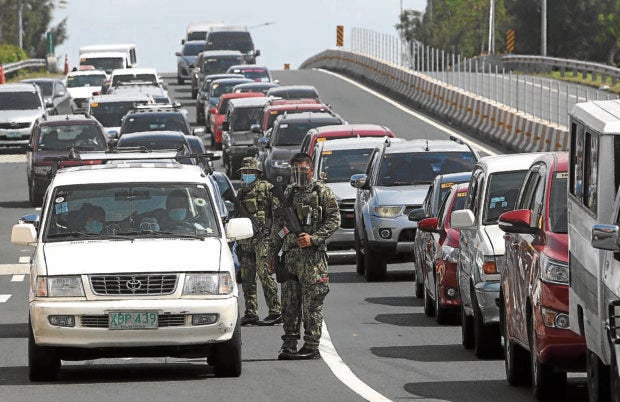 MANILA, Philippines — Only authorized persons outside residences (APORs) or those with official and essential businesses have been allowed to leave and enter the National Capital Region (NCR) Plus bubble starting Sunday, the Department of the Interior and Local Government (DILG) clarified.

DILG spokesperson Undersecretary Jonathan Malaya said in a text message on Monday that the checkpoints were set up on the borders of the Plus areas or the provinces surrounding Metro Manila — Bulacan, Cavite, Laguna, and Rizal — were already meant to stop non-essential trips.

Travel restrictions have been placed starting Sunday, August 1, in preparation for the enhanced community quarantine (ECQ) status over Metro Manila, meant to curb the possible spread of the COVID-19 Delta variant.

“Yes starting yesterday actually,” Malaya told INQUIRER.net after being asked if only APORs are allowed to make trips.  “The ingress and egress of people going into and out of NCR Plus are for APOR only.”

“So the checkpoints are in the boundaries of Bulacan and Pampanga, Cavite and Batangas, etc.,” he added.

Malaya further added that by Friday, August 6, or by the time that the ECQ status over Metro Manila takes effect, travel into and out of Metro Manila would also be restricted from the plus areas.

“Once ECQ starts on August 5, we will also place checkpoints inside Metro Manila and NCR Plus provinces,” he said.

Last Friday, Malacañang announced that President Rodrigo Duterte had already approved the Inter-Agency Task Force for the Management of Emerging Infectious Diseases (IATF) resolution putting Metro Manila under an ECQ from August 6 to 20 amid the Delta variant’s threat.

This same resolution, Malaya said, is DILG’s basis in implementing the more stringent restrictions over NCR Plus.

It is not clear whether the more transmissible Delta variant is already spreading inside Metro Manila, but the Department of Health has tallied higher than usual cases, with over 8,000 new COVID-19 infections since Friday, while the active COVID-19 case count remained above 60,000.

Analytics group OCTA Research speculated last week that seven percent of the country’s active patients may already be carrying the Delta variant.  Earlier, it warned that a community transmission may already be happening in Metro Manila.

The ECQ imposition results in the setting up of the quarantine control points, which have been blamed for heavy traffic flow due to long queues at key points in Metro Manila during COVID-19 case surges.

Philippine National Police (PNP) chief Gen. Guillermo Eleazar earlier asked for patience from the public as the QCPs are seen to cause massive traffic build-up again, urging people to prepare their travel documents for a smooth flow on checkpoints.