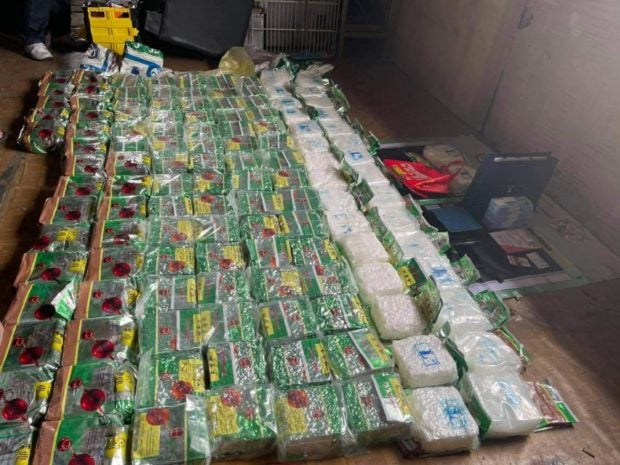 This is the haul of crystal meth, worth P1.482 billion, that PDEA agents seized in three operations on Sunday, Aug. 1, 2021. (Photo from PDEA)

MANILA, Philippines — Four suspects were arrested and a Chinese suspect was killed in a shootout in three drugs operations in Balagtas town in Bulacan and Quezon City and Valenzuela in Metro Manila, which also led to the seizure of P1.482 billion worth of suspected crystal meth, or shabu, according to the Philippine Drug Enforcement Agency (PDEA).

“We believe that these groups are related to each other,” said PDEA Director General Wilkins Villanueva in an interview with GMA News.

“And it’s here that we see the main source of illegal drugs,” he added.

The Chinese suspect, identified as Wu Zishen, was killed in an armed encounter in Barangay Santol in Balagtas town in Bulacan, where PDEA agents seized 75 kilograms of suspected crystal meth worth P510 million, along with an identification card and a .45-caliber pistol.

In Barangay Paso de Blas, Valenzuela, agents arrested a suspect — identified as Joseph Dy — and seized from him 15 kg of crystal meth worth P102 million.

Arrested suspects will face charges in violation of Republic Act 9165 or the Comprehensive Dangerous Drugs Act of 2002.