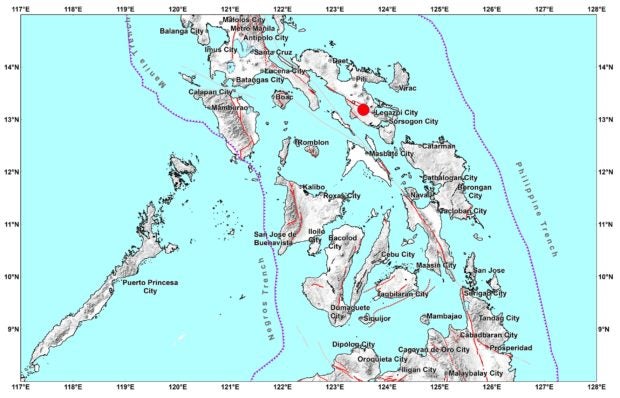 GUINOBATAN, Albay—A magnitude 3.1 earthquake rocked parts of Albay Saturday morning, according to the Philippine Institute of Volcanology and Seismology (Phivolcs).

Phivolcs said the epicenter of the tectonic earthquake was in Ligao City in Albay.

In this town, which is adjacent to Ligao City, the ground produced a humming sound during the quake.

“That is normal for tectonic quakes because as the ground shakes, it generates sound waves,” Paul Alanis, resident volcanologist at Phivolcs in Legazpi City told the Inquirer.

“However, since it is near [Mayon] volcano, residents must still be extra careful,” he said.

The earthquake was felt at Intensity II in Legazpi City, the provincial capital, some 50 kilometers away from the center of the quake, anf Intensity III in Daraga, its neighboring town.

No damage and aftershocks are expected following the quake, according to Phivolcs.