‘This is like a nightmare’: Thousands displaced as floods hit Bangladesh Rohingya camps 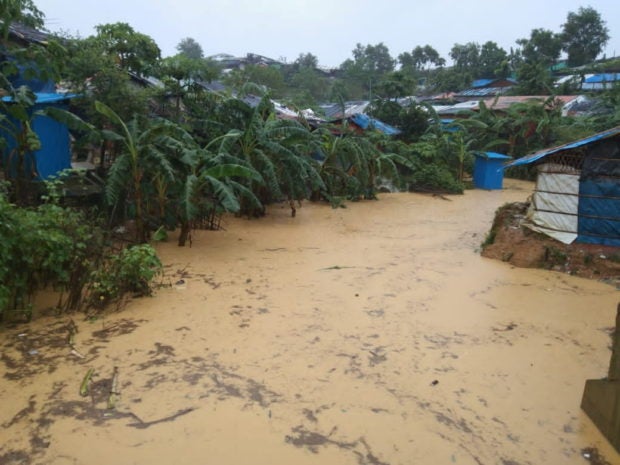 At least six Rohingya, including three children, died in landslides and flooding while 15 Bangladeshis were killed and more than 200,000 stranded by flooding in Cox’s Bazar, said Mamunur Rashid, the district administrator.

Nearly one million Rohingya live in crowded camps in the border district of Cox’s Bazar, the world’s largest refugee settlement, after fleeing a military crackdown in neighbouring Myanmar in 2017.

The refugees mostly live in shacks made of bamboo and plastic sheets that cling to steep, bare hills. TV footage showed flooded homes and muddy water cascading down steps and hillsides. Children played in chest-high waters.

“This is like a nightmare,” said Rohingya Rokeya Begum. “I have never seen such flooding in the camps in four years. When the water came, there was nobody from my family at home to help. I was alone but I could take my belongings to a safer place. Now I am staying with another family.”

The U.N. Refugee Agency (UNHCR) said more than 21,000 refugees had been “affected” by the flooding while nearly 4,000 shelters had been damaged or destroyed.

It said more than 13,000 were forced to relocate in the camps, while thousands of facilities were damaged, including health clinics and toilets. Access has been hindered due to damage to roads, pathways and bridges.

And the flooding is likely to get worse.

“Heavy rainfall is expected during the next few days, and as such, challenges are likely to increase,” said Manuel Marques Pereira, Deputy Chief of Mission in Bangladesh for the U.N.’s International Organization for Migration.

Refugees, many of them still recovering from massive fires that tore through the camps in March, said landslides and floods left homes “totally covered with mud”.

“Somehow my family members could evacuate,” said Abu Siddique, who lives in the Balukhali refugee camp. “The mud that came down from the hill entered my home… All of our belongings inside are covered in mud.”