More than 100,000 children in Tigray at risk of death from malnutrition – UNICEF 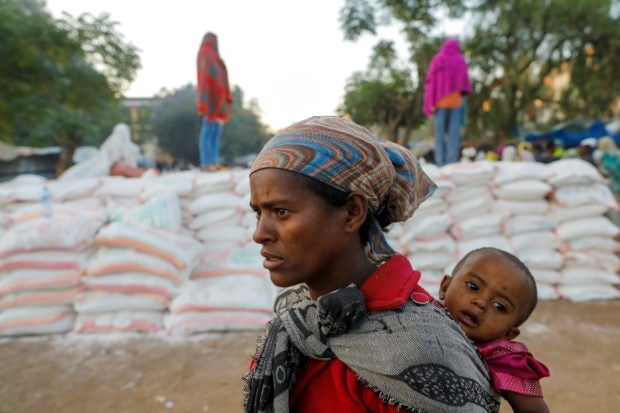 A woman carries an infant as she queues in line for food, at the Tsehaye primary school, which was turned into a temporary shelter for people displaced by conflict, in the town of Shire, Tigray region, Ethiopia, March 15, 2021. Picture taken March 15, 2021. REUTERS/Baz Ratner

GENEVA — Over 100,000 children in Ethiopia’s northern region of Tigray could suffer from life-threatening malnutrition in the next 12 months, a 10-fold jump over average annual levels, the U.N. Children’s Fund (UNICEF) said on Friday.

UNICEF spokeswoman Marixie Mercado, speaking after returning from Tigray, said that one in two pregnant and breastfeeding women screened in the region were acutely malnourished, leaving them and their babies prone to sickness.

“Our worst fears about the health and wellbeing of children in that conflicted region of northern Ethiopia are being confirmed,” she told a U.N. briefing in Geneva.

“UNICEF estimates that over 100,000 children in Tigray could suffer from life-threatening severe acute malnutrition in the next 12 months – a tenfold increase compared to the average annual caseload,” she said.

There are no mortality estimates, she added, calling for unfettered access and a “massive scale-up in assistance”.

Spokespeople for the prime minister and a government task for Tigray did not immediately respond to requests for comment on UNICEF’s estimates.

Fighting began between the Ethiopian central government and the Tigray People’s Liberation Front (TPLF) last November. The TPLF recaptured most of its home region in June and July, but most aid is blocked.

Prime Minister Abiy Ahmed’s spokesperson, Billene Seyoum, told a news conference this week that any barriers to access for aid groups to Tigray were being closely monitored by the government.

Children, women, and other civilians bear the scars of the conflict and trauma endured, Mercado said.

“For example, we spoke to one young woman who is a survivor of sexual assault, she watched her grandmother get killed, she was raped by several men as she watched her nine-month-old baby being tossed around by other men,” she said.

It has been two weeks since a convoy of the U.N.’s World Food Programme (WFP) was able to enter the Tigray regional capital Mekelle, spokesman Tomson Phiri said.

“A convoy of over 200 trucks is on its way now from Semera to Mekelle. This is a drop in the ocean,” he told the briefing.

“We need at least 100 trucks to be making their way every day into Tigray if we are to stand a chance to reverse the catastrophic situation which we have today.”