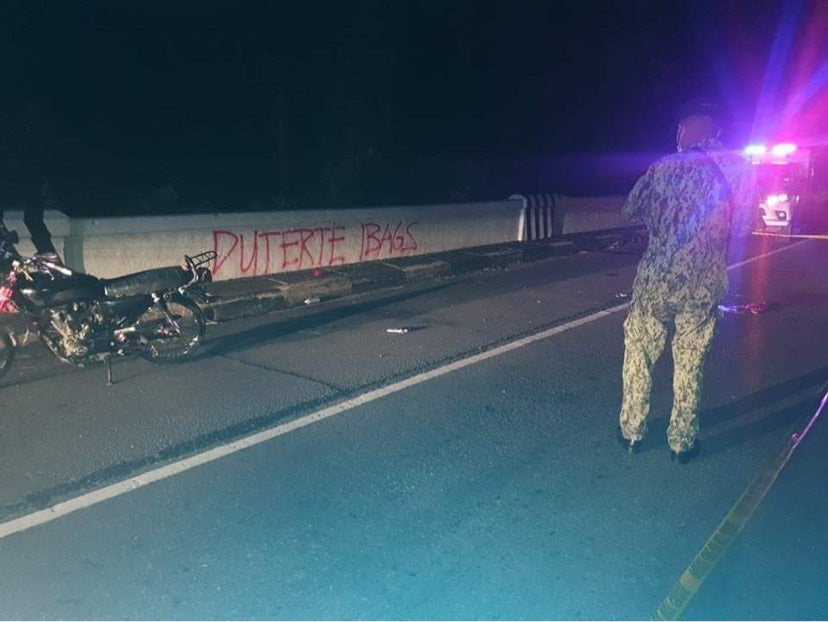 On the order of Justice Secretary Menardo Guevarra, the National Bureau of Investigation will look into the killing of two activists in an alleged shootout with policemen early on Monday in Guinobatan, Albay.

Guevarra issued Department Order No. 175 directing the NBI, through Officer in Charge Eric Distor, to investigate how Marlon Napire, 40, and Jaymar Palero, 22, died, and, if evidence warranted, to file appropriate charges against those found responsible for their deaths.

He gave Distor 10 days to submit an initial progress report.On Wednesday, Philippine National Police chief Guillermo Eleazar directed its Internal Affairs Service to look into possible procedural lapses that led to the deaths of Palero and Napire, who were caught by roving cops spray-painting a protest slogan on a bridge railing hours before President Duterte was to deliver his final State of the Nation Address.

But according to Guevarra, the NBI needed to step in to ensure that the investigation of the Guinobatan killings would be “thorough, objective and impartial.”

On Thursday, Police Maj. Maria Luisa Calubaquib, spokesperson of the Bicol police, said the PNP’s Criminal Investigation and Detection Group would also look into the incident that the families of the two men called a “rubout.”

According to Police Maj. Joel Jarabejo, since relieved as chief of the Guinobatan police force, Palero and Napire fired first, prompting the cops that had chanced upon them to shoot back.

Palero’s mother, Jennifer, called for justice for him and for unity among aggrieved families.

Palero lost his job at a construction site due to the pandemic, and took on-call driving work to support his partner and their toddler.

His mother said in an earlier interview that there were signs of torture on his body. “The police said the encounter happened at 10 p.m. Why was his body recovered at 1 a.m.? Where did they bring him?” she said.In her latest remarks, Jennifer said many innocent lives had been lost under the Duterte administration.

She lamented her son’s death, saying that even if he had been caught spray-painting the message “Duterte Ibagsak” (Down with Duterte), “he should just have been sent to jail.”

She said Mr. Duterte was “not a worthy President,” and that “a lot of innocent and powerless citizens” had been killed during his term.