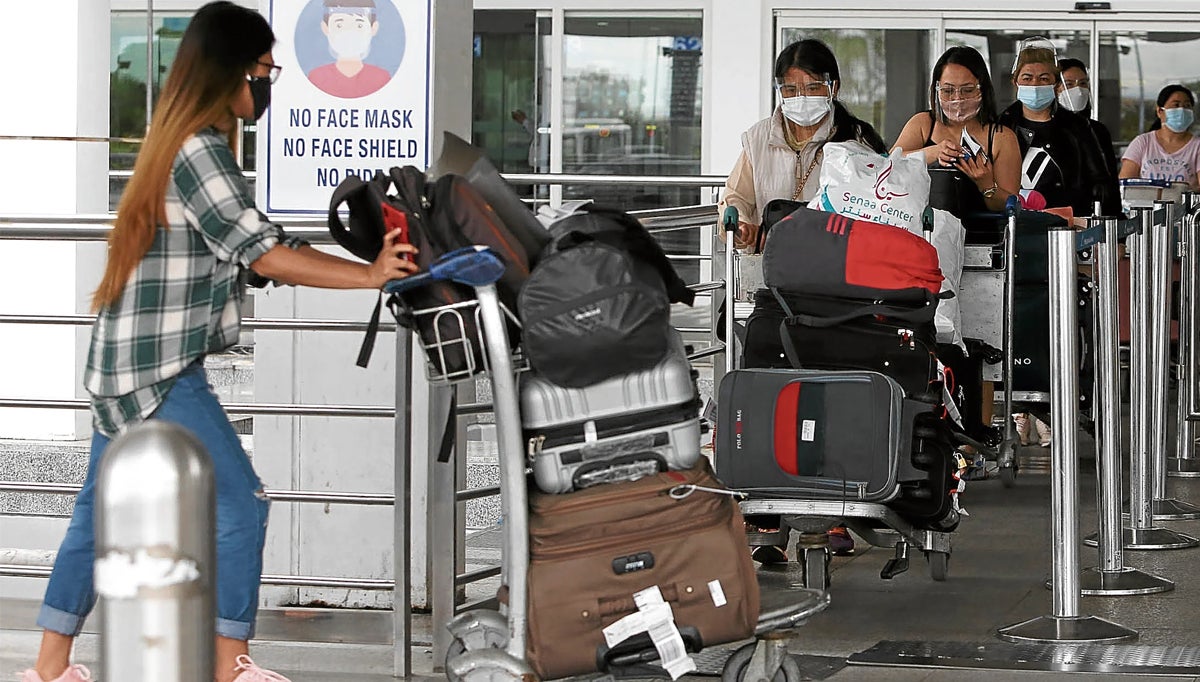 MANILA, Philippines—More overseas Filipino workers (OFWs), who are reeling from personal difficulties, harassment and violence, are finding it difficult to attain relief or justice because of widening gaps in the processing and handling of their cases by competent authorities.

In preparation for World Day Against Trafficking (WDAT) on Friday (July 30), Mangahas, with Blas F. Ople Policy Center and Training Institute (Ople Center) and International Organization for Migration (IOM), presented the worrisome conditions of many OFWs.

A closer look at risk and vulnerabilities

OFWs are already vulnerable to risks and predation even before they leave the Philippines. 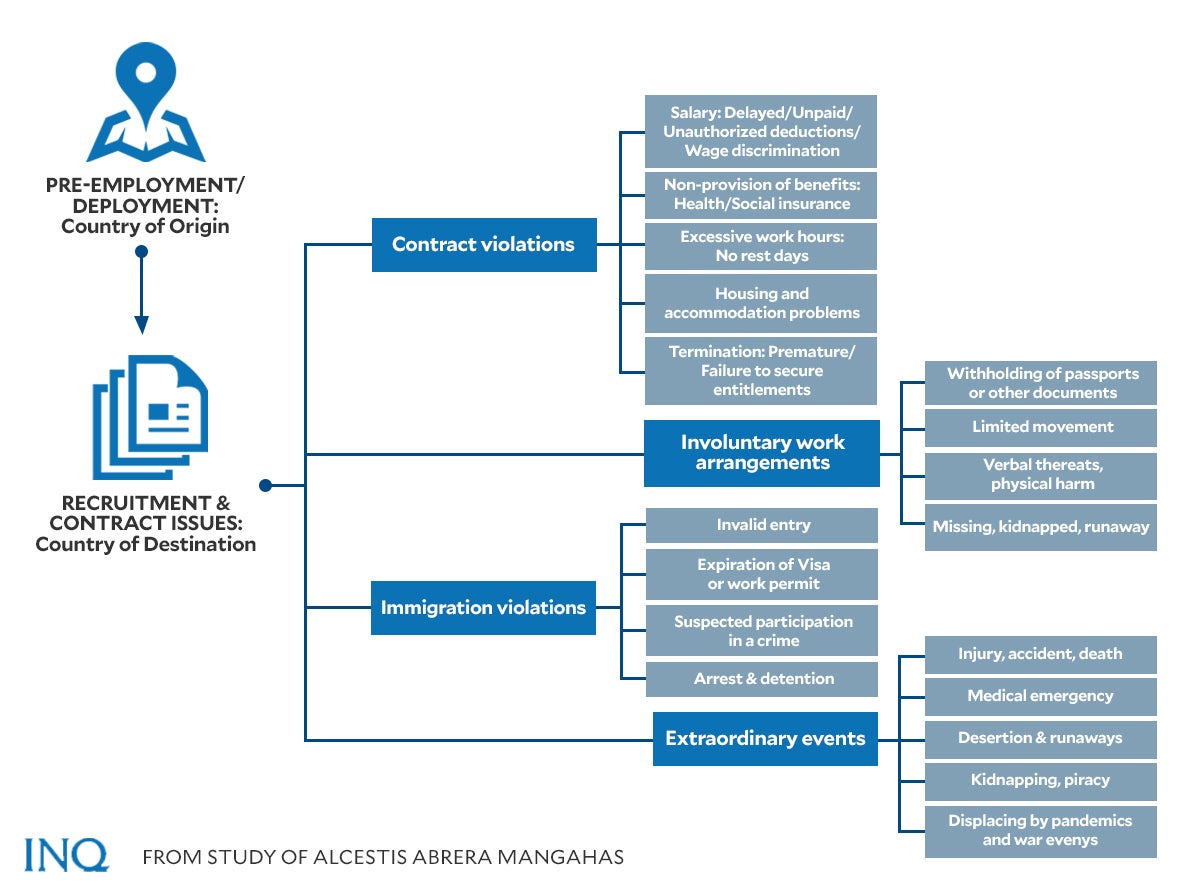 The study also found that only 63.1 percent of OFWs aged 15 and over had health insurance or medical allowance in their last country of destination.

Unfortunately, most OFWs face many barriers in pursuing their cases and complaints—more so in attaining justice.

Citing data from the 2018 National Migration Survey, Mangahas said that among the OFWs who experienced contract violations and involuntary work arrangements, only a third sought help.

From those who sought help, only a few filed a complaint or case against their employer. 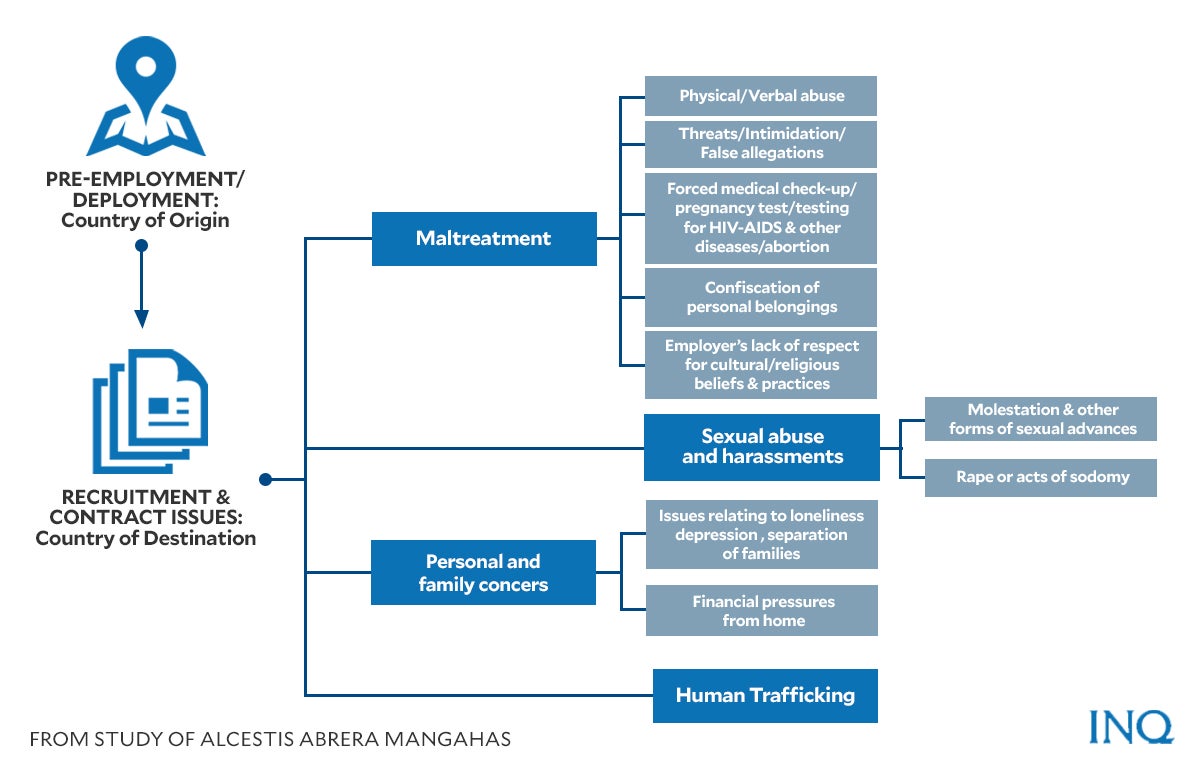 One of the main reasons OFWs refused to seek help were threat, fear, and shame (27.1 percent). Others said they do not have enough financial support to file a case (4.8 percent).

However, data from the study said 53.4 percent of OFWs who suffered contract violations and involuntary work arrangements said they simply resigned or accepted what happened.

Of the 53.4 percent, 17.6 percent said they thought no one would listen or believe in their grievances. Around 9.9 percent thought it was a normal part of their work contract.

Meanwhile, 15.3 percent said that the issue was not a big deal to them so they did not bother to seek help. At least 10.6 percent no longer had contact with their employer.

Four percent also said they were not sure or did not feel they were abused because their employer was good to them. The 16.4 percent of OFWs cited other reasons for not seeking help.

“There is the disturbing sense of helplessness and resignation among the respondents, an acceptance that taking action would not result in significant positive change,” said Mangahas.

She added that it is always a “common concern over costs.”

Another barrier discussed by Mangahas was the confusing and multiple sources of information on accessing justice.

According to her, overseas Filipinos and migrant workers who are victims of injustices often get conflicting advice and guidance on how they can attain justice.

Other times, private recruitment agencies offer help, but only this was not enough. Meanwhile, civil society organizations (CSO) are more helpful but are under-resourced.

The study also noted that there was a prevailing “perception of non-sympathetic response of government agencies and institutions.”

The other two barriers mentioned in the study were high costs—not only for legal help but also for alternative house and living arrangement, case documentation, and loss of income—and uncertain outcomes from pursuing the cases like the risk of getting blacklisted by employers and agencies as well as family pressure.

Gaps in the complaints

Data from the Overseas Workers Welfare Administration (OWWA) visualized the status of complaints and cases they received last year.

“Within the current redress mechanisms, there is a strong internal pressure to settle,” Mangahas said.

“At the POEA (Philippine Overseas Employment Administration), the OWWA, the NLRC (National Labor Relations Commission), and even at the POLOs (Philippine Overseas Labor Office) in the different countries, the current procedures have built-in opportunities to settle, with many calls for several conferences or conciliation,” Mangahas explained.

One reason for choosing to have a settlement is that it can shorten the time needed for the claimant to receive immediate compensation.

When both parties agreed to settle, the OFW can be sure to receive some amount rather than none at all.

“The desire for speed, however, can also lead to lopsided results, as the OFW – though back in the home country – is still negotiating from a position of weakness against the employer’s or the agency’s position of strength,” she said.

Meanwhile, 25 percent or 1,145 of the total cases did not have enough information. Around 15 percent was passed on or referred to NLRC or POEA for processing or resolution.

The data also showed that there were still 24 pending cases while 71 cases have already been withdrawn.

Through the years, the government has made efforts and commitments to pass laws and international standards foundation for government migration policy.

However, numbers from OWWA highlight the challenges in current mechanisms, monitoring systems, and categories of cases.

Some of these issues within the government agencies handling OFW cases were:

“The current systems do not allow a comparability of datasets, due to the absence of standard classification of cases, joint reporting and analysis, and unified tracking systems between and among digital or manual reporting systems of the DOLE offices,” said Mangahas.

To address the gaps in complaints and cases involving OFWs, Mangahas in her study primarily recommended the designation of a convergent hub.

“By establishing clear accountability, the hub is expected to provide oversight, facilitate access, develop systems, pursue efficiency, monitor fair outcomes, and report on worker protection to those affected, the stakeholders of the grievance mechanisms and the general public,” she said.

“Establishing a hub will bring a sense of order to the current operations of the different complaints mechanisms,” she added.

Cases from NLRC, POEA, OWWA, POLO, and other offices will then be submitted to the hub where it can be tagged depending on the nature of the complaint to facilitate a quick response and to make tracking easier.

The five tags or categories include recruitment and regulation; contract-related violations; forced labor and trafficking in persons; medical, health, and death services; and immigration and workers in conflict with the law.

“Effective partnerships are a critical aspect to ensuring that a human rights-based approach to labor migration becomes a reality,” said Kristin Dadey, chief of mission of IOM.

The ALTER (Aligning Lenses Towards Ethical Recruitment) project, which was launched in September 2020, aims to “sustainably reduce the prevalence of trafficking among OFWs by empowering the Philippine government and civil society to develop ethical recruitment standards and practices.”

Former labor undersecretary Susan Ople, head of the Ople Center, urged the authors of pending bills focused on creating a new department for OFWs to take note of the data in Mangahas’ research.

Last May 31, President Rodrigo Duterte has certified as urgent Senate Bill No. 2334, a measure to create the Department of Migrant Workers and Overseas Filipinos (DMWOF).

“Access to information on grievance mechanisms and understanding what is happening on the ground is really an opportunity to sort of build up evidence around [the government’s] policies, approaches, operations, and practices,” said Troy Dooley, head of Programmes at IOM-United Nations (UN) Migration.

“Through these mechanisms you get [not only] an understanding of the vulnerabilities of the workers, but also the gaps in the management systems [and] recruitments that have emerged and policies in specific countries that needed to be addressed with other governments as well,” he added.