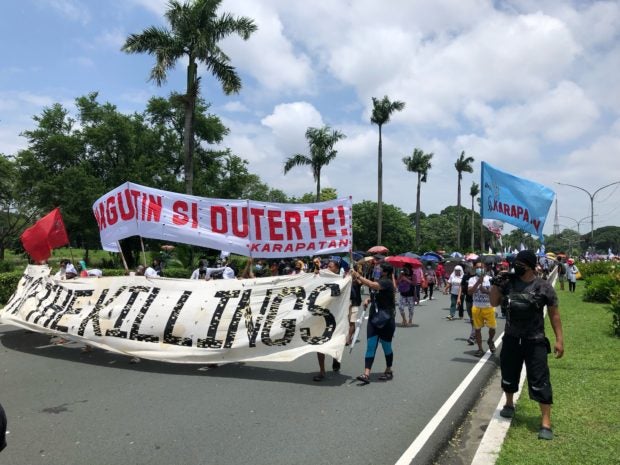 Different groups hit the streets in a protest action during the final Sona of President Rodrigo Duterte, July 26, 2021. The groups started their march at the UP Diliman heading toward Commonwealth Avenue in Quezon City. Image from Makabayan bloc

MANILA, Philippines — The Quezon City Police District (QCPD) said on Wednesday that the protest march during last Monday’s State of the Nation Address (Sona) was temporarily blocked to ensure traffic along Commonwealth Avenue does not get too congested.

Yarra said that the march was stopped temporarily to allow vehicles to pass the area, which supposedly lies after the University of the Philippines (UP) Diliman campus.

“They were complaining, allegedly, the police officer assigned in that spot, ‘yong sa UP Kinetics school, across the UP Hub Center, kasi ‘pag pumunta kayo doon sa area, makikita niyo coming from UP Campus, nagna-narrow down ‘yong area di ba,” Yarra said in a press briefing.

“So no’ng approach — this is from the statement of the STG Commander Lt. Col. Imelda Reyes — kumipot ‘yong daan, kumipot ‘yong kalsada.  And then the protesters no, almost occupied the entire Commonwealth area, so ‘yong police natin were just trying to contain them and provide for a two lanes of the Commonwealth for the motorists,” he added.

(At the approach — this is from the statement of the STG Commander Lt. Col. Imelda Reyes — there’s a narrow road. And then the protesters almost occupied the entire Commonwealth area. So cops were just trying to contain them and provide for two lanes of the Commonwealth for the motorists.)

Yarra explained that the stop was just temporary and that the protesters were allowed to continue with their program.  He also stressed that even the protesters knew the police weren’t only there to protect them, but also to maintain order and prevent traffic jams.

A few negotiations with rallyists led to the situation being resolved, and the march went forward, he noted.

After Duterte’s final Sona, Quezon City Mayor Joy Belmonte asked the QCPD on Tuesday to submit a written explanation about complaints from protesters that they had violated the agreement about the areas where protesters could stage their programs.

“Quezon City Mayor Joy Belmonte asked QCPD Police District Chief Antonio Yarra to submit a written explanation to shed light on allegations made by rally organizers that the agreement forged among these protesters with the QCLGU through Mayor Belmonte and QCPD Director Yarra was not honored by the latter,” the Quezon City government said.

“The demonstrators claimed that contrary to the gentlemen’s agreement arrived at after a lengthy dialogue in which they would be permitted the constitutional right to peaceably assemble and exercise their freedom of expression, on the strict condition that minimum health standards including the submission of all the names and contact details of rally participants would be observed, the QCPD allegedly broke their word by blocking the march along Commonwealth Avenue thereby causing a commotion,” it added.

Prior to the Sona itself, there were already rumors that the QCPD would not allow protesters to march along Commonwealth Avenue and instead have them hold their program along the Quezon City Memorial Park.

However, protest leaders including Bagong Alyansang Makabayan (Bayan) secretary-general Renato Reyes said that QCPD has no authority to approve or deny rally permits.