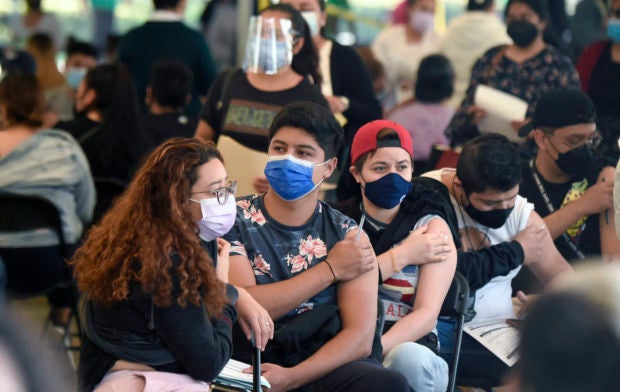 People wait after receiving their first dose of the Sputnik-V vaccine against COVID-19 in Mexico City, on July 27, 2021. AFP

MEXICO CITY — It’s Friday night and bars and restaurants in the Zona Rosa nightlife district are crowded with mostly younger Mexicans, who are bearing the brunt of a third wave of Covid-19.

Some people stroll down the street without masks while others enjoy a beer in the Mexico City neighborhood.

“I’ve had a difficult week,” a 20-year-old designer who did not want to be named told AFP after having a couple of drinks with a friend.

Until recently he avoided going out much for fear of catching the coronavirus and infecting relatives.

“Some people don’t care about Covid,” he said, expressing relief that on Tuesday vaccinations will finally begin for 18- to 30-year-olds.

Other bar-goers appeared less worried about infection but shied away from talking to the media.

Mexico has been in the midst of a third wave of infections for more than a month, although deaths and hospitalizations remain far below a peak seen in January.

At that time there was hospital occupancy of 95 percent and more than 900 deaths a day.

But with the highly contagious Delta variant of the virus now circulating in much of Mexico, infections have accelerated again.

Last week, for the first time in a month, deaths passed 300 within a 24-hour period, adding to the country’s more than 238,000 fatalities — the world’s fourth highest toll.

Like all businesses in the capital — home to around nine million people — customers in the bars of Zona Rosa have their temperatures checked and are asked to use hand sanitizer.

“The truth is that young people don’t care if they’re going to be infected or not. They want to party,” the 55-year-old said.

“They feel that they’re not going to be infected and it’s a problem because the pandemic is still there and getting worse.”

Last Friday the authorities raised the pandemic alert level in the capital, but did not impose new restrictions on economic or social activities.

Most of those now hospitalized for Covid-19 in Mexico are under 52 years old, according to the government.

Hospitalizations and deaths are lower than in the first two waves as most of the people at higher risk have already been vaccinated, he said.

Around 42 million people in the country of 126 million have had at least one dose of coronavirus vaccine, and 24 million of them are fully vaccinated, according to the government.

The country began its immunization program on December 24 with priority given to frontline health workers and the elderly.

President Andres Manuel Lopez Obrador said this week that the fact that the people being infected now were mainly younger showed that it was the right strategy.

Malaquias Lopez, an epidemiologist at the National Autonomous University of Mexico, said the latest wave of infections was a reflection of reduced social distancing and waning public concern, as well as the arrival of the Delta variant.

Previously lockdown measures were tightened when officials raised the pandemic alert level, which is based on the green, yellow, orange and red colors of a traffic light.

“Now we have a traffic light that allows everything to keep going,” he said.