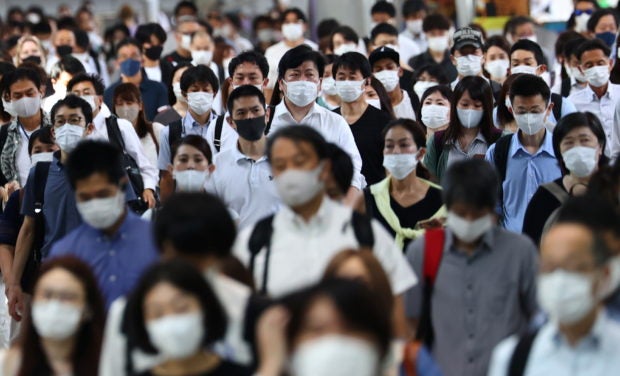 TOKYO — Daily COVID-19 cases in Olympic
host city Tokyo hit a record high for a second straight day on
Wednesday, topping 3,000 for the first time since the pandemic
began, local media reported, as the spike in infections puts
pressure on hospitals.

The sharp rise in cases may dampen domestic enthusiasm for
the Games – taking place under unprecedented conditions,
including a ban on spectators in most venues – despite a rush of
medals for Japanese athletes.

The surge may also spell trouble for Japanese Prime Minister
Yoshihide Suga, whose support ratings are at their lowest since
he took office last September, ahead of a general election this
year.

Governors of three prefectures near Tokyo will ask the
government to declare states of emergency for their regions, a
cabinet minister said, after daily cases hit 2,848 on Tuesday.

Yasutoshi Nishimura, who is leading Japan’s COVID-19
response, told a parliamentary panel the prefectures would ask
the government to declare the emergency as early as Thursday.

He added that daily COVID-19 cases were expected to rise
further in coming days, as testing may have been delayed during
holidays last week.

“I think we have entered a mode of sharp rises in cases,
which I had feared the most,” Yuji Kuroiwa, governor of Kanagawa
prefecture near Tokyo, told reporters. Kanagawa and nearby Chiba
and Saitama prefectures are seeing cases jump.

Tokyo is under its fourth state of emergency, which that
will last through the Olympics, while the other three regions
are implementing looser “quasi-emergency” steps.

Tokyo Olympics organizers on Wednesday reported 16 new
Games-related COVID-19 cases, for a total of 169 since July 1.
Olympic athletes, staff and media must follow strict rules to
prevent the virus’s spread, including frequent testing.

“As a city resident myself and as an organizer, my heart
hurts that case numbers are rising (in Tokyo),” Tokyo 2020
spokesperson Masa Takaya told a news conference.

He repeated that strict measures were in place inside the
“Olympic bubble”. Many Japanese have worried about a spread of
infections from Olympics participants.

Suga on Tuesday urged people to stay home as much as
possible and watch the Olympics on television. He said
canceling the Games was not an option.

Japan has avoided the devastating outbreaks suffered by
other nations such as India, Indonesia and the United States,
but the fifth wave of the pandemic is piling pressure on Tokyo’s
hospitals.

“The risk of infection for individuals is the highest ever.
It is affecting even ordinary medical care and … is a severe
situation,” Koji Wada, a professor at Tokyo’s International
University of Health and Welfare and an advisor to the
government on COVID-19 response, told NHK public television.

Unlike stricter steps in many countries, Tokyo’s current
emergency measures focus mainly on asking restaurants that serve
alcohol to close and others to shut down by 8 p.m.

Many Japanese have grown weary of the largely voluntary
restrictions and some experts say the government decision to go
ahead with the Olympics sent a confusing message about the need
to stay home, posing a greater risk than direct contagion from
Olympic participants.