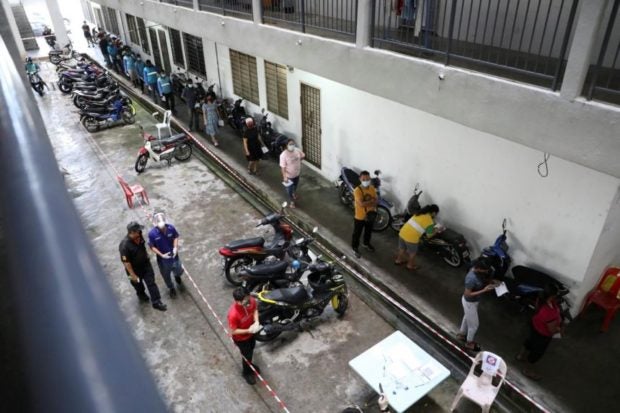 Daily cases had averaged less than 3,000 when the emergency was promulgated, but have shot up to over 14,000 now. REUTERS

KUALA LUMPUR — The government’s shock announcement that emergency ordinances ostensibly to fight the Covid-19 pandemic had been revoked last week, despite Malaysia’s worsening outbreak, has thrown the nation into confusion, with opposition MPs calling for an immediate explanation in Parliament on Tuesday (July 27).

Proceedings at the start of the day were delayed for ½ hour over the matter, at the heart of which is whether these laws remain effective since the July 21 Cabinet decision, as thousands have been fined, arrested or investigated under these rules since.

Democratic Action Party deputy chairman Gobind Singh Deo asked: “Why were we not informed? When was it revoked and whose decision was it and was it according to procedure and what is the impact to the wider public?”

As the revocation has not been gazetted, it has also left lawyers unsure about how to advise their clients.

Jelutong MP Sanisvara Rayer said prosecutors were still proceeding with cases as “they have not been informed of the withdrawal of these ordinances”.

Lawyers contacted by The Straits Times said they were “honestly waiting for confirmation” on how to proceed with cases in which their clients would be affected.

Constitutional law professor Shad Saleem Faruqi told ST that the cancellation of the ordinances “must be gazetted (to take effect) although it can be backdated”.

Parti Keadilan Rakyat communications director Fahmi Fadzil pointed out that between July 21 and July 25, more than 2,200 fines were issued for breaches of the Prevention and Control of Infectious Diseases Act, with many over RM1,000 (S$321) as allowed under an ordinance that raised the limit.

The Bar Council Constitutional Law Committee chairman Andrew Khoo told ST that “at the minimum, the excess would have to be refunded if the compound” was issued after the effective date of the withdrawal.

He expected that those arrested for dissent under the so-called “fake news” ordinance, are “very likely to be released and immediately re-arrested under existing non-emergency laws”.

Bukit Mertajam MP Steven Sim said: “If the Prime Minister being admitted to hospital due to diarrhoea can be announced through a press statement, how can such an important issue like revocation of emergency ordinances not be announced to the public?”

In response, de facto law minister Takiyuddin Hassan, who had dropped the bombshell on Monday, said Speaker Azhar Harun had instructed him to respond on Aug 2, the day after Malaysia’s seven-month long state of emergency expires.

“Get a new ruling from the Speaker (to explain now),” he responded to demands that the issue be clarified immediately.

Even Deputy Speaker Azalina Othman, who presided over the morning session, admitted: “I am in the same situation (of being in the dark).” She said that she could not overrule the Speaker’s ruling.

Malaysians have been up in arms over the sudden announcement of the cancellation of the ordinances – gazetted without parliamentary approval due to the state of emergency that was declared on Jan 11 – which the government had described as essential to fight the Covid-19 outbreak.

Daily cases had averaged less than 3,000 when the emergency was promulgated, but have shot up to more than 14,000 now.

“It is farcical that the ordinances supposedly crucial to fight Covid-19 when cases were below 5,000 daily are being revoked when cases and deaths are at record highs,” Parti Warisan Sabah deputy president Darell Leiking told ST.

The announcement that the ordinances had been withdrawn and that the emergency would not be extended beyond Aug 1, came just a day after Umno president Zahid Hamidi instructed all 38 of the party’s MPs to “vote to repeal the emergency proclamation and ordinances”, which have “clearly failed to tackle the Covid-19 pandemic and was instead a political ploy to emasculate parliamentary democracy”. Umno forms the largest bloc of the government bench.

This has fuelled the belief, as claimed by Umno information chief Shahril Hamdan, that the Muhyiddin administration is avoiding a test of its majority, which has been in serious doubt ever since Zahid declared earlier this month that the party no longer supported the Premier and called for his resignation.

However, most of the party’s MPs continue to hold government positions and have said they remain steadfast with the administration.

Only seven have publicly stated they no longer back Mr Muhyiddin. Nonetheless, on paper, this leaves the Perikatan Nasional administration slightly short of a majority of the 220 members. Two seats are vacant in Parliament.