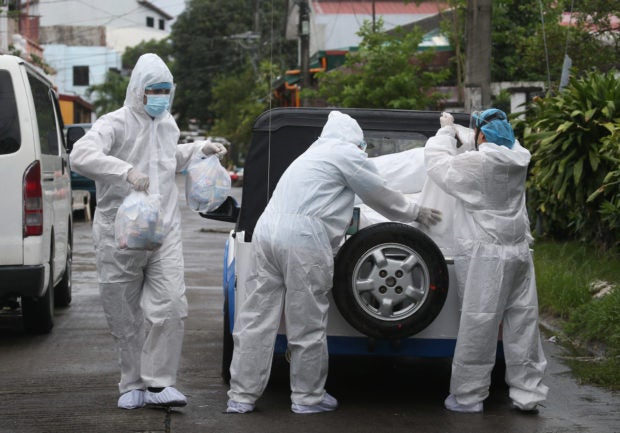 MANILA, Philippines — The OCTA Research Group has advised the government to impose a two-week lockdown to help curb the spread of the more transmissible Delta variant of COVID-19 and avert the situation of the health system becoming overwhelmed anew.

But the group, which has been at the forefront of pandemic monitoring, did not specify the scope of the lockdown. Still, it emphasized the urgency of that measure at Tuesday’s Laging Handa briefing.

“We are in a surge [of COVID-19 cases] here in the National Capital Region,” said professor Ranjit Rye, a fellow of the research group, as he noted the reproduction number in the capital region which is now at 1.33 compared with 0.6 a month ago.

OCTA made its latest assessment as the Department of Health (DOH) on Tuesday recorded the highest number of new cases since more than a month ago.

Professor Guido David, Rye’s colleague at OCTA who was also at the Laging Handa briefing, cited the reproduction number of 1.9 in Cebu City, Mandaue and Lapu-Lapu—the country’s current coronavirus hot spots, he said.

According to David, the other hot spots in the country are Cagayan de Oro, parts of Ilocos Norte and Ilocos Sur and Mariveles, Bataan.

‘Save the fourth quarter’

Rye said the country should “go early and go hard” like Australia and New Zealand to prevent the situation from worsening.

This means it should impose “anticipatory, preventive, circuit-breaking lockdowns,” he said.

He said further that, with the lockdowns, “we would be able to save the fourth quarter [of this year] for all our big businesses and small businesses.”

Rye also warned that the Delta variant “is really something else. If this spreads and we neglect this, we will lose effective control of the [pan]demic.”

He advised the public to avoid social gatherings, such as dining together in restaurants, to avoid the Delta variant.

“There is a big possibility you will be infected, especially if you are not vaccinated,” he said.

“Given the rising number of new cases and steady increase in reproduction rate, Octa believes that the current GCQ [general community quarantine] with heightened restrictions will not be enough to reverse the alarming trends,” Rye said.

“We agree with the recommendation of OCTA, which is why our coordination with the local government [is] continuing because they’re the ground-implementing units for our PDITR (prevent-detect-isolate-treat-reintegrate) Plus strategy. So we need to do all we can to stop the cases from beginning to increase again,” Duque said.

The health chief said the Inter-Agency Task Force for the Management of Emerging Infectious Diseases, which he chairs, would come out with a decision after reviewing the situation in Metro Manila and other hot spots identified by the research group.

Presidential spokesperson Harry Roque said, however, that as of now, the government’s pandemic managers do not recommend another lockdown.

On the other hand President Duterte himself, in his State of the Nation Address on Monday, warned of a possible lockdown if the Delta variant spreads.

Yet Roque said in his press briefing on Tuesday, “We should also reduce the number of people who go hungry as a result of imposing ECQ.”

The government would monitor the weekly situation and would not hesitate to impose stricter lockdowns, he added.

The DOH recorded 7,186 new COVID-19 infections in its latest case bulletin, the highest number of new cases in a single day since June 13, when there were 7,302 new cases.

The new cases brought the total number of infections in the country to 1,562,420.

The DOH also reported that another 5,672 patients have since recovered, bringing the total number of survivors to 1,478,625.

However, there were 72 new fatalities which brought the death toll to 27,318.

Thirteen laboratories failed to submit their data on time, while 162 duplicate cases were removed from the total case count.
The department said 49 cases previously tagged as recoveries were reclassified as deaths following final validation.