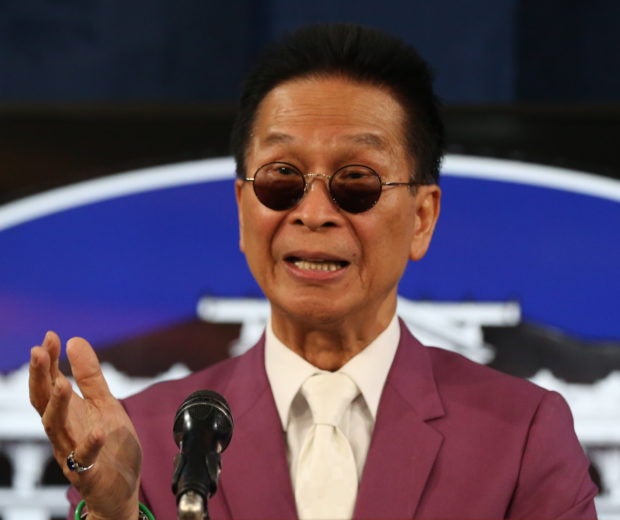 MANILA, Philippines — After tagging her as among those allegedly involved in a plot to oust President Rodrigo Duterte in 2019 and without issuing any apology for it, Malacañang officials on Tuesday sang the praises of weightlifter Hidilyn Diaz following her historic feat of winning the country’s first-ever Olympic gold at the Tokyo Olympics last Monday.

“Her feat makes us Filipinos proud. Her getting the gold is a testament to the Filipino race’s talent and indefatigable spirit. It serves as an inspiration to all Filipino athletes that getting the gold in the Olympics is no longer a dream but a reality,” chief presidential legal counsel Salvador Panelo said in a statement.

“Hidilyn’s victory is the victory of the entire Filipino nation,” he said.

But don’t expect Roque to apologize to Diaz for being included in the matrix of alleged government destabilizers in 2019, saying he had nothing to do with it.

“None. As spokesperson, I did not make any accusation against Hidilyn Diaz,” Roque said in a press briefing.

The diagram was presented in a May 8, 2019, briefing by Panelo, Roque’s predecessor, where she was tagged along with communist and opposition leaders.

They were linked to the release of the videos that showed a hooded man, later identified as Peter Joemel “Bikoy” Advincula, accusing members of the President’s family and their associates of involvement in the illegal drug trade.

Panelo insisted that the matrices had been properly vetted and said further questions should be directed to the President. A week later, Duterte defended their authenticity.

Diaz said then she was shocked about her inclusion in the matrix, adding she had “other goals in life and for the Philippines to join such things.’’ She also feared for her life.

“I am so focused on my goal for Tokyo 2020. Please do not drag the name of someone who is so busy sacrificing everything for the Philippines, doing everything to represent the Philippines in weightlifting, in Philippine sports but you suddenly put her name in a baseless matrix,’’ Diaz said then in a Facebook post.

Now that Diaz achieved her Tokyo Olympics gold, Panelo still won’t apologize for brandishing her name in the matrix.

In a statement on Tuesday, Panelo criticized those who were bringing up the matrix. He reiterated that he never claimed that she was part of a drug list.

“These selfish people, claiming that it is only them who have the right to celebrate our country’s victory, say that supporters of the government should disassociate themselves from the feat even as they stooped so low by creating a social media card which falsely attributed remarks against Ms Diaz to me,” he said.

Only admiration for her

“As for me, I can only admire Ms Diaz and sincerely congratulate her who, together with our other athletes in Tokyo, continues to make us proud,” he added.

Roque also said Diaz is set to receive a windfall from President Duterte aside from what she would get from private entities that promised her hefty bonuses. (See related story on this page.)

“Money cannot buy Hidilyn’s victory, but let us allow people to show our love for Hidilyn by offering her not just congratulations, but also rewards for her achievement,” he said.

He acknowledged that the country’s athletes do not receive enough support from the government and likened their allowance to minimum wage.

He said Diaz’s gold medal could be a “game changer” that could spur policymakers to improve the country’s sports program.

—WITH A REPORT FROM INQUIRERRESEARCH