Robredo: Gov’t must be more compassionate to Filipinos amid pandemic 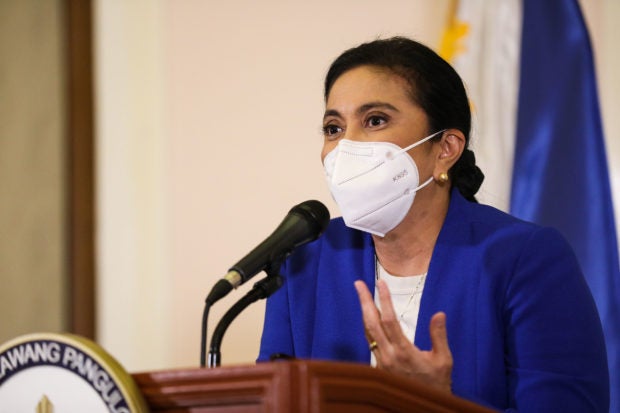 MANILA, Philippines — Vice President Leni Robredo has appealed for a more compassionate treatment of Filipinos amid the COVID-19 pandemic, citing several examples where the government has berated the public instead of talking and working with them.

Speaking during her report to the nation on Tuesday, Robredo said that the government must ask itself why people continue to disregard some of the quarantine restrictions, implying that there may be more to it than just violating the regulations.

(When our fellow Filipinos leave their homes even while under ECQ, shouldn’t we look deeper into their reasons for doing so? Perhaps there is more to it than simple hard-headedness.)

(Perhaps they face the very real threat of starving if they don’t go out to work; perhaps it’s even more cramped and unsafe in their homes?)

In the same manner, Robredo said that suggestions and complaints from health workers, who are at the forefront of the fight against COVID-19, should be heard and not immediately dismissed.

The same goes for people who refuse to get vaccinated against COVID-19: Robredo said that a thorough discussion and possible incentives — and not arrests — should be explored.

(When our doctors and nurses cry out for help, shouldn’t our first response be: What can we do, how do we ease your burden?)

(When people are reluctant to get vaccinated, isn’t it better to give incentives, rather than threaten with punishment? When suggestions are being made, shouldn’t we listen first, rather than outrightly dismissing it as fault-finding and antagonism?)

While there were many instances of Filipinos violating quarantine regulations for leisurely purposes and in utter disregard of the disease, there are other instances where workers — who were merely trying to find a living amid a crisis — were subjected to harsh treatment because they went against the protocols.

In 2020, a Quezon City unit went under fire for using excessive force against a fish vendor who was not wearing his face mask.  Then this January 2021, a Parañaque vendor was seen being arrested and his goods confiscated during a clearing operation at the city.

Duterte himself, on the other hand, had made threats to arrest violators of quarantine restrictions, and eventually, those who would not have themselves vaccinated against COVID-19.

READ: Those who refuse to get vaccinated vs COVID-19 may be arrested, Duterte warns | Stick-wielding cops to enforce distancing; hardheaded folk beware

During the same speech, Robredo already called on the national government to stop pushing for divisiveness amid the health crisis, reminding officials that the disease does not distinguish politics and party membership.

She also found Duterte’s Sona lacking in terms of emphasis to more important matters like the COVID-19 pandemic.

Despite the issues, Robredo said that she still believes the country can overcome the crisis especially as Filipinos have shown their readiness to help one another.

(I see this clearly in all of our initiatives during this pandemic: The Filipino is compassionate, the Filipino is always ready to lend a hand, we only need spaces to come together in solidarity and communal responsibility.)

(The task ahead of us is to widen these spaces, and direct every step and every effort towards reaching one horizon.)