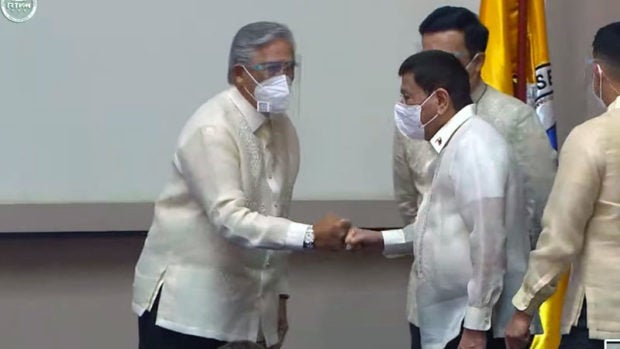 In his final State of the Nation Address, Duterte hailed Sotto as a “good man” and someone “who can become a good vice president.”

“Hindi naman po, I think kinikiliti lang niya si Senate President kasi naririyan siya at they had of course an occasion to meet dahil siya yung sumalubong sa Kongreso,” presidential spokesperson Harry Roque said in an interview with GMA-7, when asked if Duterte’s remarks meant he is endorsing Sotto and will no longer vie for the vice president.

(Not really, I think he was only tickling the Senate President because he was there and they had an occasion to meet since he was the one who welcomed the President in Congress.)

(It’s like he’s just encouraging the Senate President to pursue his political plans because under democracy, it’s important that the people have choices.)

Sotto has announced intent to run for vice president in 2022, with Senator Panfilo Lacson gunning for the presidency as his running mate.

Meanwhile, the President has floated a number of times running for vice president. In a recent incident, Duterte said he would vie for the second highest post to get immunity from lawsuits he may face.