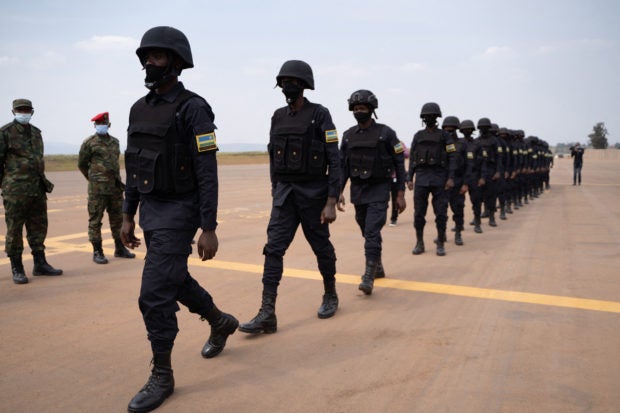 Rwandan policemen and Rwandan soldiers from Rwanda Defense Forces (RDF) prepare to board a “Rwandair” plane for a military mission to Mozambique at Kanombe airport, Kigali, Rwanda on July 10, 2021. AFP

MAPUTO — Mozambique’s President Filipe Nyusi on Sunday expressed his gratitude to African countries sending troops to help fight insurgents in the north of the country.

Nyusi lauded soldiers already sent by Rwanda as regional allies prepared to deploy their own forces.

That military intervention was formalized a week after east African nation Rwanda announced it was starting to deploy 1,000 troops to the area.

In a rare comment on the deployment, Nyusi — who long resisted foreign intervention — thanked SADC and Rwanda for the mobilization.

“The mandate of foreign forces is to help Mozambican forces restore peace and stability,” Nyusi said in an address to the nation.

“We should not fear the presence of foreign forces in our country,” he added. “We should be afraid of being alone in fighting terrorism.”

Soldiers will support Mozambique’s ongoing efforts to counter Islamic State-linked militants that have been terrorizing its gas-rich north since 2017.

Their attacks escalated last year and culminated on March 24 with coordinated raids on the port town of Palma in which dozens of people were killed, some decapitated, and thousands displaced.

“Rwandan troops have come to save lives in a province where we have people being killed and beheaded every day,” the president said. “We couldn’t deny any available assistance.”

The timing and size of the SADC deployment, as well as the number of soldiers sent by each member, is not yet known.

The bloc sent four officers earlier this month to study the situation and work out logistics.

Botswana announced earlier on Sunday that its President Mokgweetsi Masisi would be bidding farewell to defense forces leaving for Mozambique on Monday, without providing further detail.

The violence in Cabo Delgado has driven around 826,000 people from their homes and claimed more than 2,000 lives, according to Nyusi.