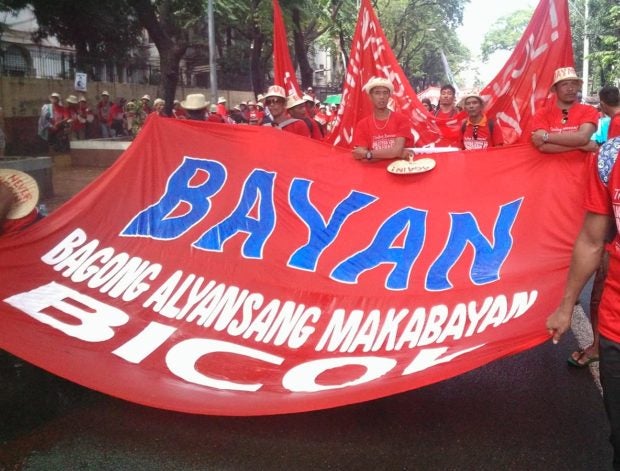 LEGAZPI CITY––Members of the Bagong Alyansang Makabayan (Bayan) Bicol Albay chapter filed a harassment complaint with the Commission on Human Rights (CHR) office against members of the Philippine National Police (PNP) and the Philippine Army (PA) on Monday.

Bayan Bicol spokesperson Vince Casilihan said protesters were holding rallies connected with President Duterte’s State of the Nation Address, when they noticed that several motorcycle-riding men in civilian clothes, believed to be police or military, were following and taking pictures of them in rally centers here.

Casilihan said even the Karapatan Bicol office in Old Albay District in this city was not spared the harassment.

He said the staff there also complained that motorcycle-riding men in civilian garb were roaming around the office and taking pictures of people entering and leaving the office.

Members of Bayan Bicol were able to take video footage and photos of the incidents.

The mass action in Albay that ended at noon Monday started with a march rally at 10 a.m.

Activists, bearing placards and tarpaulins with protest messages, walked along the Maharlika Highway in Camalig, Daraga, and Legazpi City.

The activity culminated with a program at the Albay Peñaranda Park in Old Albay District and the Pinaglabanan Monument in the business district.

The Inquirer tried to obtain the side of PNP Bicol and Army authorities, but they have not yet issued their respective statements as of Monday afternoon.