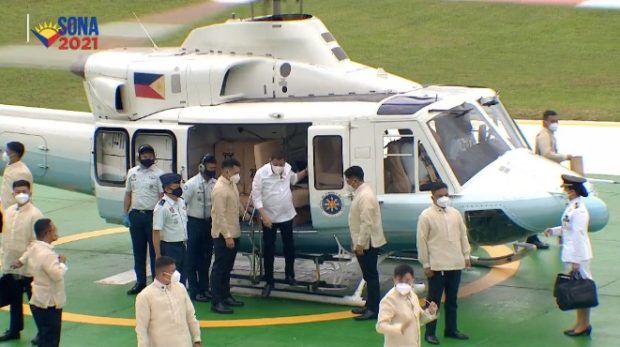 President Rodrigo Duterte arrives at the Batasan Complex aboard the presidential plane. Screengrab from government broadcast

MANILA, Philippines — For his last year as the country’s top official, President Rodrigo Duterte on Monday said he has “fewer visions” for the country but “more remembrances.”

Duterte said this in his final State of the Nation Address (Sona) held in Batasang Pambansa Complex.

“Today as I approach the end of my term, I have fewer visions but more remembrances. But mine is not to rue or second guess what might have been but to bear and respond with the urgency of the unforeseen events as they unfold,” he said.

During the first part of his speech, he touted the achievements of his administration, from free education, universal health care, gains in the war against illegal drugs and corruption, and accomplishments in terms of infrastructure.

“Even when I took my oath of office, I knew the gravity of the enormity of the problems of the country. Precisely because of that awareness, I was driven to hasten the implementation of changes I believe the country needs,” he said.