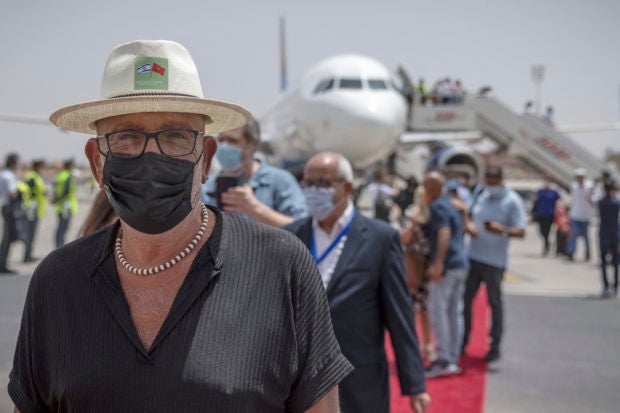 Israeli tourists arrive at the Marrakech-Menara International Airport on the first direct commercial flight between Israel and Morocco, on July 25, 2021. AFP

MARRAKESH — The first direct commercial flights between Israel and Morocco landed in Marrakesh on Sunday, more than seven months after the countries normalized diplomatic relations in a US-brokered deal.

Passengers from Tel Aviv arrived on an Israir flight early on Sunday afternoon to be met with dates, cakes and mint tea at a welcoming ceremony organized in their honor.

“I am originally from Marrakesh. I’ve come back here around 30 times but this time, the trip has a special flavor — it’s as if it were the first time!” an emotional Pinhas Moyal told AFP from the tarmac, his mask and bag in the colors of the Moroccan flag.

“This is a historic moment, this flight can only strengthen the bridge between Israel and Morocco,” said Benjamin Ron, a tour guide hoping to bring in other Israelis in the future.

Israir spokeswoman Tali Leibovitz told AFP that two to three flights per week were planned on the route.

A second flight, by the Israeli national carrier El Al, landed in Marrakesh later in the day.

El Al said it plans five flights per week to Marrakesh and Casablanca.

At a ceremony sending off the El Al flight attended by Moroccan envoy Abderrahim Beyyoudh, Israel’s Tourism Minister Yoel Razvozov said the service would boost “trade, tourism and economic cooperation between the countries”, according to an El Al statement.

Morocco was one of four regional states to agree to normalize ties with Israel last year, along with the United Arab Emirates, Bahrain and Sudan.

The move came as the administration of former US president Donald Trump recognized Morocco’s sovereignty over Western Sahara, a disputed and divided former Spanish colony.

The US State Department said on Twitter it was “excited” at Sunday’s El Al flight, calling it “another important development stemming from improved relations between our partners and friends in Israel and Morocco”.

Morocco is home to North Africa’s largest Jewish community, which numbers around 3,000. Some 700,000 Jews of Moroccan origin live in Israel.

“It’s great to return to the land of my ancestors,” said 58-year-old Sophie Levi, originally from Casablanca, who was one of hundreds of people to arrive on Sunday.

Some 50,000 to 70,000 tourists annually travelled to Morocco from Israel via third countries before the coronavirus pandemic, many of them of Moroccan origin.

In December last year, a direct flight carrying Israeli officials travelled from Tel Aviv to Rabat, where they signed several bilateral deals, including on air links.

Rabat had a liaison office in Tel Aviv but relations came to a halt during the 2000-2005 second Palestinian intifada, or uprising.

The normalization deals between Arab states and Israel have been deemed a “betrayal” by the Palestinians, who believe the process should only follow a resolution of the Israeli-Palestinian conflict.

Rabat strongly denied the reports and said it was suing the rights groups.