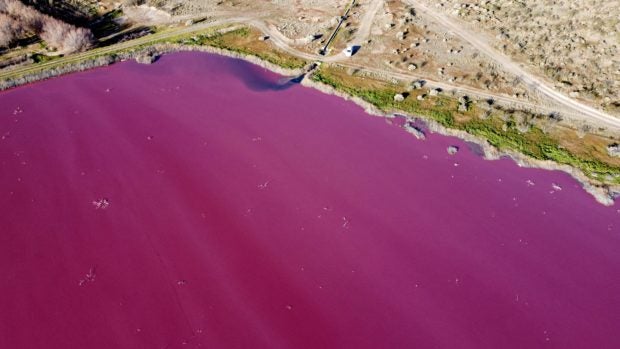 Aerial view of a lagoon that turned pink due to a chemical used to help shrimp conservation in fishing factories near Trelew, in the Patagonian province of Chubut, Argentina, on July 23, 2021. – AFP

TRELEW, Argentina — A lagoon in Argentina’s southern Patagonia region has turned bright pink in a striking, but frightful phenomenon experts and activists blame on pollution by a chemical used to preserve prawns for export.

The color is caused by sodium sulfite, an anti-bacterial product used in fish factories, whose waste is blamed for contaminating the Chubut river that feeds the Corfo lagoon and other water sources in the region, according to activists.

Residents have long complained of foul smells and other environmental issues around the river and lagoon.

“Those who should be in control are the ones who authorize the poisoning of people,” environmental activist Pablo Lada told AFP, blaming the government for the mess.

The lagoon turned pink last week and remained the abnormal color on Sunday, said Lada, who lives in the city of Trelew, not far from the lagoon and some 870 miles (1,400 kilometers) south of Buenos Aires.

Environmental engineer and virologist Federico Restrepo told AFP the coloration was due to sodium sulfite in fish waste, which by law, should be treated before being dumped.

The lagoon, which is not used for recreation, receives runoff from the Trelew industrial park and has turned the color of fuchsia before.

But residents of the area are fed up.

“We get dozens of trucks daily, the residents are getting tired of it,” said Lada.

With Rawson off limits due to the protest, provincial authorities granted authorization for factories to dump their waste instead in the Corfo lagoon.

“The reddish color does not cause damage and will disappear in a few days,” environmental control chief for Chubut province, Juan Micheloud, told AFP last week.

Sebastian de la Vallina, planning secretary for the city of Trelew disagreed: “It is not possible to minimize something so serious.”

Plants that process fish for export, mainly prawns and hake, generate thousands of jobs for Chubut province, home to some 600,000 people.

Dozens of foreign fishing companies operate in the area in waters under Argentina’s Atlantic jurisdiction.

“Fish processing generates work… it’s true. But these are multi-million-dollar profit companies that don’t want to pay freight to take the waste to a treatment plant that already exists in Puerto Madryn, 35 miles away, or build a plant closer,” said Lada.