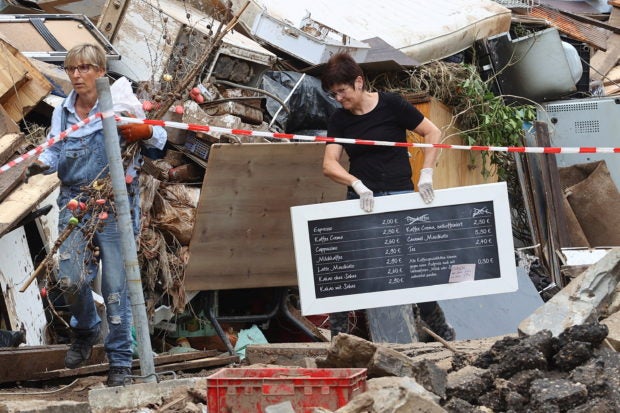 ERFTSTADT, Germany — A entrepreneur from eastern Germany who raised more than €30,000 to help victims of the catastrophic floods that hit western areas last week, arrived in hard-hit Erftstadt on Saturday with machinery to help the cleanup.

The floods, Germany’s worst natural disaster in nearly six decades, have killed at least 180 people. Others are still missing and meteorologists have warned of more rain over the weekend.

Sebastian Frenkel, who often visits the western Eifel region of Germany that has been devastated, initiated an online crowdfunding scheme to help. Once he had raised enough money, he bought equipment to help the mammoth clean-up effort before setting off with it from Potsdam, near Berlin.

“There are no roads anymore, no bridges. We saw some harsh images in Schuld, in Ahrweiler,” Frenkel told Reuters TV.

He and a team of helpers arrived in the town of Erftstadt, which has piles of rubble and rubbish lining the streets, in trucks with trailers of equipment.

“We are unloading everything now. We have brought construction dryers, screed dryers, we have things for the kids in a different car and we hope people will benefit from it.”

Hundreds of volunteers had also responded to a Facebook appeal to help clean out a wet basement at a nursing home.

“It is unbelievable how much people are willing to help. How they all came, telling us ‘we are going to make it’,” said nursing home employee Tanja Dietzen. “I feel like crying. I find it hard to understand.”