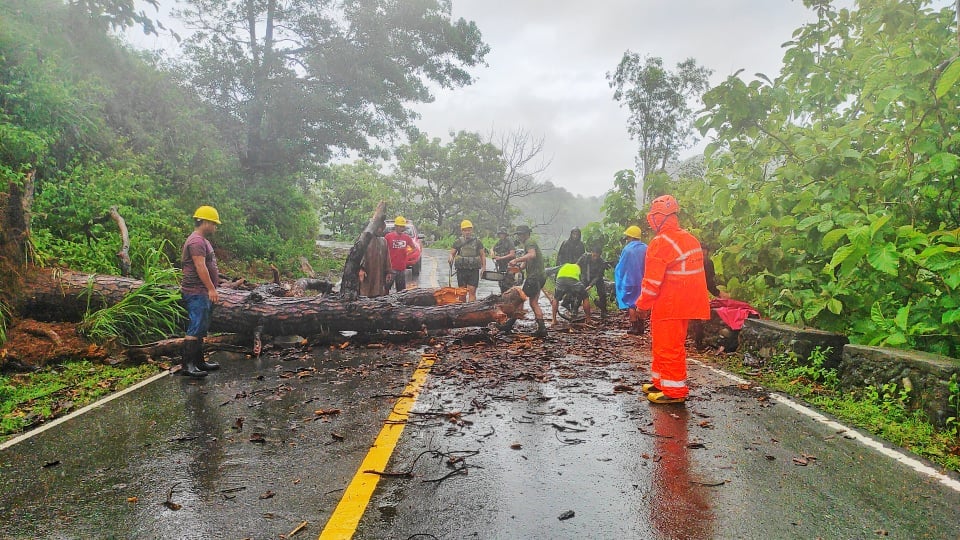 TOPPLED Torrential rains triggered a landslide that toppled trees along a portion of the Lengas-Pasikad Road in Abra-Kalinga
Highway on Thursday. The road was temporarily closed to give way to a clearing operation. —PHOTO COURTESY OF LICUAN-BAAY MDRRMO

BAGUIO CITY—A week of intense rains spawned by the southwest monsoon and enhanced by Typhoon “Fabian” (international name: In-fa) have triggered landslides and widespread flooding in the Cordillera region since Thursday, authorities said.

The landslides destroyed ongoing roadwork, including slopes outfitted with rock netting, in the iconic Kennon Road in Benguet province, halting all repair activities in the area, according the Office of Civil Defense (OCD) in the Cordillera. Commuters have already been restricted from entering the century-old zigzag road because of the ongoing repairs.

According to the OCD, Marcos Highway, which is the main route to the summer capital, was also closed on Thursday night due to a collapsed mountain wall in Taloy Sur village in Tuba town, also in Benguet, but alternate roads are available for travelers entering or exiting the city.

Six other major Cordillera roads in Benguet and Abra were briefly closed but have been reopened by the Department of Public Works and Highways by Friday afternoon, the Cordillera Regional Disaster Risk Reduction and Management Office said in an advisory.

One lane of Halsema Highway, a prominent artery for trucks delivering salad vegetables, has opened along Barangay Pico in Benguet’s capital town La Trinidad following an erosion there.

Major roads in La Trinidad were also submerged in floodwater as the Balili River swelled due to incessant rains.

The region’s vegetable supply remains stable despite the damaged road, Cameron Odsey, director of the Department of Agriculture in Cordillera, told the Inquirer on Friday.

No casualties were reported although torrential rains have affected eight families or 51 people in the towns of Balbalan and Lubuagan, both in Kalinga province.

In Zambales province, two families were evacuated to safety as rising level of rivers threatened to flood their houses in the low-lying village of Burgos in San Marcelino town.

The river at Barangay Sta. Fe, also in San Marcelino, rose to a critical level due to torrential rains.

According to the local disaster risk reduction and management office, the prolonged downpour also triggered lahar flow in San Marcelino. At least 2,591 individuals from 584 families were also evacuated in Mimaropa (Mindoro, Marinduque, Romblon and Palawan) due to flooding, the region’s police said.

Police Lt. Col. Imelda Tolentino, Mimaropa police information officer, said several roads and bridges across the region became impassable for hours on Friday before floods subsided. Seventeen of these roads are in Oriental Mindoro’s town of Baco, she said.

Responders from the Provincial Disaster Risk and Reduction Management Office in Oriental Mindoro reported difficulties in their rescue operations in some parts of Naujan town because residents were trapped in their flooded homes. —VINCENT CABREZA, KIMBERLIE QUITASOL, VILLAMOR VISAYA JR., JOANNA ROSE AGLIBOT AND MADONNA VIROLA