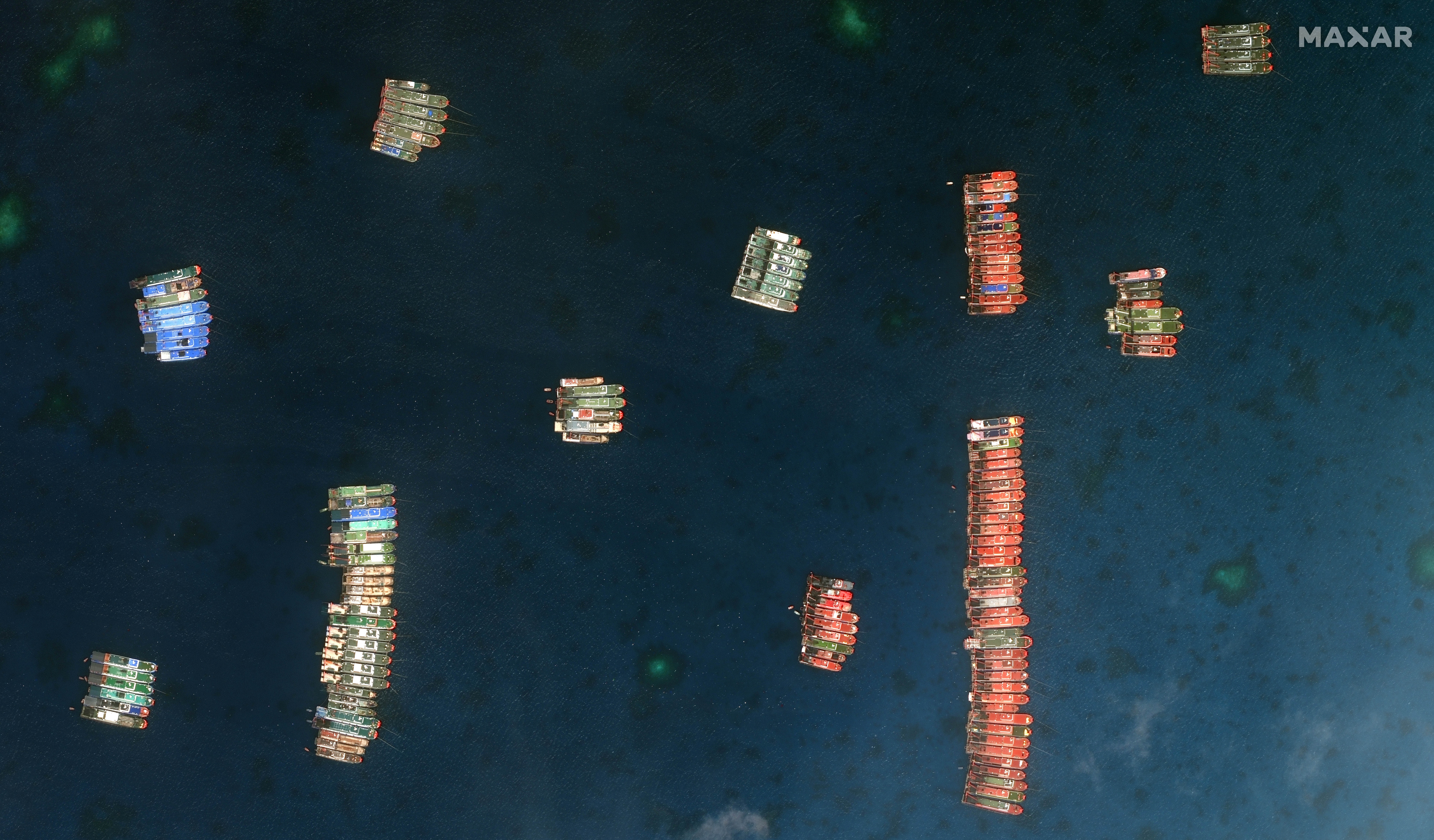 (FILE) Closer view of one set of fishing vessels at Whitsun Reef, which Manila calls the Julian Felipe Reef, in this Maxar handout satellite image. —REUTERS

“That’s what the Filipino fishermen want. Pero kaya niya ba gawin ‘yan?[But can he do that?]” Carpio said in an online briefing hosted by his coalition 1Sambayan on Friday.

(I hope he will surprise me and say he will not allow, ‘I will prohibit them from violating our Constitution, violating the arbitral award.’ ‘Yun lang ang hihingin ko sa kanya. Surprise me, by saying bawal na ang Chinese fishermen mangisda sa ating exclusive economic zone.)

In issuing his appeal, Carpio recalled Duterte’s revelation that he and Chinese President Xi Jinping have an agreement to allow China to fish in the Philippines’ EEZ after Beijing granted Filipino fishermen access to Scarborough Shoal.

“Can we expect President Duterte to change in his last year of his term? I have a very simple test for that. The Consitution says the exclusive economic zone is for Filipinos only. All the fish in the West Philippine Sea is for Filipino fishermen only that is the Constitution, that’s the arbitral award, that is UNCLOS, (United Nations Convention on the Law of the Sea), that is international law,” Carpio went on.

“Pero si President Dutete, ang sabi niya pinayagan ko yung mga (But President Duterte said he allowed) Chinese fishermen to fish in the Philippine exclusive economic zone. That is against the Constitution, against the arbitral award, against UNCLOS, against the international law,” he added.

He said Filipino fishermen are “suffering” since their wooden boats are no match for huge Chinese vessels.

“Wala silang laban [They’re helpless’,” he added. “Our fishermen are asking, pleading with President Duterte, pagbawalan niya [to prohibit them].”

Carpio said Duterte could easily invoke the 1987 Constitution, Manila’s win at the Permanent Court of Arbitration in The Hague as well as the UNCLOS to prohibit Chinese fishermen from fishing in the country’s EEZ.

“Sabihin niya lang. Wala namang mawawala sa kanya [He can just say it. He has nothing to lose],” the retired magistrate said.