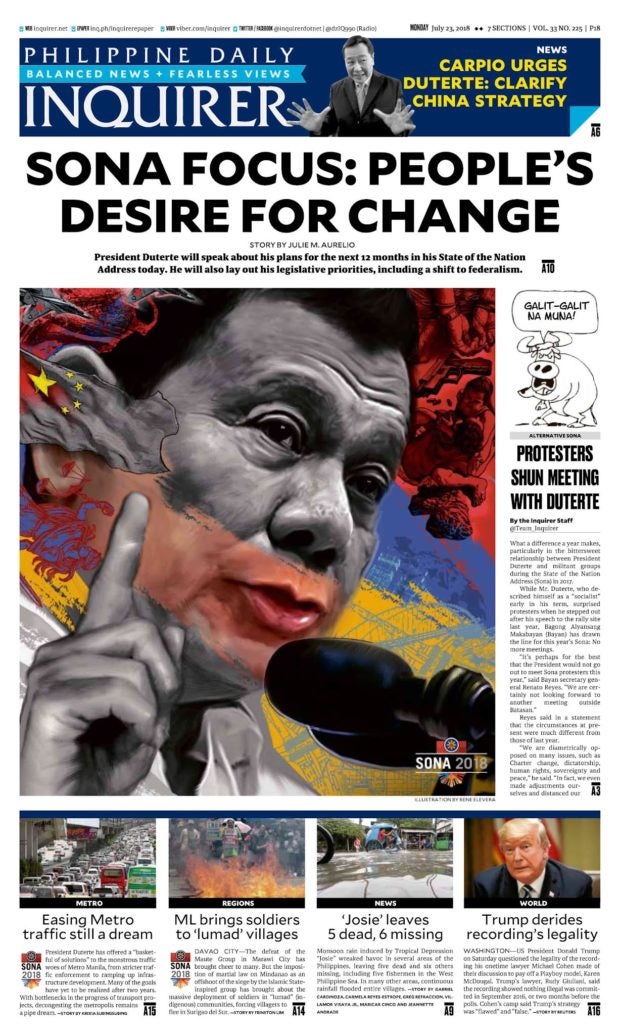 (Fifth of a series)

The Inquirer’s review of President Duterte’s promised reforms, as articulated in his past State of the Nation Addresses (Sona), continues.

A campaign promise he made that was music to the ears of the country’s labor sector, Mr. Duterte’s commitment to ending contractualization was again trumpeted in one of his speeches before Congress.

The years that followed, however, showed that this much-applauded vow to end “endo’’ was never set in stone after all.

This part of the series rounds up the other major Sona pledges he made in the first half of his term.

Two bills under the Duterte administration’s tax reform program had been signed into law—the Tax Reform for Acceleration and Inclusion Act (TRAIN), which rationalized personal income tax rates and imposed new or higher taxes on consumption; and the Corporate Recovery and Tax Incentives for Enterprises Act (CREATE), which cut corporate income tax rates to below the average in Southeast Asia and rationalized fiscal incentives granted to investors.

TRAIN aims to raise funds for the government’s ambitious infrastructure program, while CREATE is seen to generate immediate tax savings for businesses.

The DOF and BIR accepted the P25-billion settlement offer of tobacco company Mighty Corp. and the case was closed three months after Mr. Duterte issued the directive in his second Sona.

In October 2017, the Department of Justice (DOJ) dismissed the three tax evasion cases, worth a total of P37.9 billion, filed against the company for its widespread use of counterfeit tax stamps. This was after the BIR withdrew its complaints.

Mr. Duterte approved in April this year the country’s first nationally determined contribution (NDC) to the UN Framework Convention on Climate Change (UNFCCC), vowing to reduce the country’s greenhouse gas (GHG) emissions by 75 percent between 2020 and 2030.

Under the NDC, the Philippines committed to a projected GHG emissions reduction and avoidance for the sectors of agriculture, wastes, industry, transport and energy. The formulation of the NDC, led by several government agencies, included economic modeling analysis, expert reviews and consultations with stakeholders from the public, private and civil society sectors.

In February last year, the National Economic and Development Authority (Neda) announced it was fine-tuning the draft executive order institutionalizing national land use planning. Neda said it was also moving to implement existing laws on utilization of land and other physical resources.

Neda crafted the draft to put in place its national land use proposal following Mr. Duterte’s order to fine-tune the bill in Congress.

In the 17th Congress, the House was able to pass House Bill No. 5240, a version of the proposed National Land Use Act, but the Senate failed to pass its version.

In his 2017 Sona, Duterte made room for an otherwise local concern: illegal parking and other traffic obstructions.

Since then, the MMDA and various local government had been conducting road clearing operations.

Street obstructions again became a Duterte target in his 2019 Sona. This time he give mayors 60 days to comply.

As of October last year, a total of 1,148 local governments had been evaluated to have complied with the directive, while 97 were issued show-cause orders for noncompliance.

On July 19, amid renewed clamor from the labor sector, Labor Secretary Silvestre Bello III said his agency would request the President to certify as urgent the so-called anti-endo bill, which seeks to end contractualization.

Bello issued this statement less than two weeks after Jacinto Paras, a former congressman recently appointed to head the Presidential Legislative Liaison Office, remarked that the anti-endo bill “is not much of a priority now.”

And yet, back during his presidential campaign, Mr. Duterte promised to end contractualization—a pledge that resonated deeply among the working class.

But three years later, in 2019, the President reneged on this promise, vetoing a bill that would have protected workers from unfair labor contracting practices.

In his veto message, Mr. Duterte said the enrolled and consolidated Senate Bill No. 1826 and House Bill No. 6908 ‘’unduly broadens the scope and definition of prohibited labor-only contracting, effectively proscribing forms of contractualization that are not particularly unfavorable to the employees involved.’’

In December 2018, Mr. Duterte signed Executive Order No. 73 that gave his office the power to directly investigate presidential appointees suspected of corruption and assume jurisdiction over cases being investigated by the Presidential Anti-Corruption Commission (PACC) at any stage of the proceedings.

The order also tasked the PACC, a body created in 2017, to recommend to the President the filing of criminal complaints in the Ombudsman or the DOJ. Previously, the PACC was only directed to refer a case to the Ombudsman only when it is deemed warranted and necessary.

In October 2020, Mr. Duterte ordered the DOJ to launch a sweeping investigation into graft allegations across all government agencies, with special focus on the Department of Public Works and Highways, which he earlier described as ridden with irregularities.

But his administration has been dogged by scandals, allegations of graft and coverups—with the most prominent cases involving the Bureau of Corrections, Philippine Health Insurance Corp. (PhilHealth), Bureau of Immigration, Bureau of Customs, the Philippine National Police and the Philippine Drug Enforcement Agency, to name a few.

In August 2020, PhilHealth president and chief executive officer Ricardo Morales resigned amid inquiries into the alleged irregularities in the state-run health insurer, particularly concerning its information technology project and the use of the interim reimbursement mechanism for COVID-19 patients.

In January, Task Force PhilHealth, an interagency body created to probe alleged irregularities in company, endorsed the filing of administrative and criminal complaints in the Office of the Ombudsman against several PhilHealth officials for the “ghost” and “double claims” racket.

In January 2019, Mr. Duterte broached the idea of amending “not all” but just a “few economic provisions’’ of the Constitution. He also advocated constitutional change to give way to a shift to a federal form of government.

But in July the following year, Malacañang said Charter change was not among the priorities of the government, now that the world was in the grip of the coronarivus pandemic. The Palace statement came after a number of mayors issued a call to amend the Constitution in order to increase local governments’ internal revenue allotment and lift restrictions on foreign investments in unspecified industries.

A resolution seeking to change the “restrictive” economic provisions in the Constitution was adopted in the House of Representatives last month. But several senators have earlier rejected this House bill, saying the changes sought by the purported “economic Charter change” are already being addressed by several proposed legislation.

Anti-Red Tape Authority (Arta) Director General Jeremiah Belgica reported during a Senate budget hearing in September 2020 that due to limited personnel, his office could only file seven cases in court for violation of RA 11032 two years after its passage. But he said they had received thousands of complaints, though not all of them evolved into formal charges since many of the local governments concerned were eventually able to address the complaints

In April 2021, Arta issued a joint memorandum requiring all local governments to set up electronic business one-stop shops. Under the law, they are required to come up with a unified business application form to streamline procedures for the issuance of business permits, clearance, and other types of authorizations.

• Significantly increase the budget for Mindanao, for the region to reach its full potential

Of the P3.66-trillion national budget for 2019, P2.36 trillion made up the regionalized items or direct allocations to the 17 regions for funding programs and projects across the country. Mindanao got P459.4 billion, or 12.5 percent, of the regionalized budget that year.

• Create the Coconut Farmers’ Trust Fund; ask Congress to draw up a plan on “how to best utilize’’ for the benefit of farmers the controversial coco levy fund collected during the Marcos dictatorship

This promise was mentioned again in the 2020 Sona.

Republic Act No. 11524, or Coconut Farmers and Industry Trust Fund Act, was signed into law in February this year, but farmer groups have expressed their disappointment and questioned its draft implementing rules and regulations (IRR).

Farmer groups have petitioned for their stronger participation in the utilization of the coco levy fund.

They also assailed what they saw as a lack of a feedback system, noting that most coconut farmers remained clueless on how they could benefit from the law. A major issue about the IRR, which took effect on July 1, was the absence of farmer representatives in the Trust Fund Management Committee—a body composed of the departments of finance, budget and justice— which would have the power to privatize or dispose of coco levy assets, currently estimated to have ballooned to about P100 billion.

In February 2019, Mr. Duterte signed into law Republic Act No. 11202, which allowed subscribers to easily shift between telcos and plans without changing their mobile numbers. The law also removed interconnection fees for local calls and text messaging. On July 16, the three major telcos announced that they have completed initial interoperability tests.

In March, new player Dito Telecommunity made its commercial launch in Visayas and Mindanao. Dito won the government- led bidding exercise in 2018 for the country’s third major telco that would challenge PLDT Inc. and Globe Telecom. The company holds a congressional franchise via Mindanao Islamic Telephone Co.

In May, Mr. Duterte granted a 25-year extension to Dito’s franchise from its expiration in 2023.

The country’s rankings have improved compared to that in April last year, when the Philippines ranked 121st out of 139 countries in mobile internet speed and placed 110 out of 174 countries in fixed broadband speed in the Speed Test Global Index.

• Create a Department of Disaster Management

This promise was repeated in 2019 and 2020. In September last year, House Bill No. 5989—or the Disaster Resilience Act—was approved by the chamber.

The measure called for the creation of a Department of Disaster Resilience which will be tasked to lead, manage and organize national disaster prevention, response and recovery programs.

At the Senate, however, the minority leader, Sen. Franklin Drilon said that instead of having a new department that could further bloat the bureaucracy, existing disaster management agencies should just have better planning and coordination among themselves. Sen. Panfilo Lacson raised the issue of funding for the new agency.

Seven bills on the creation of such a department are pending at the Senate. INQ