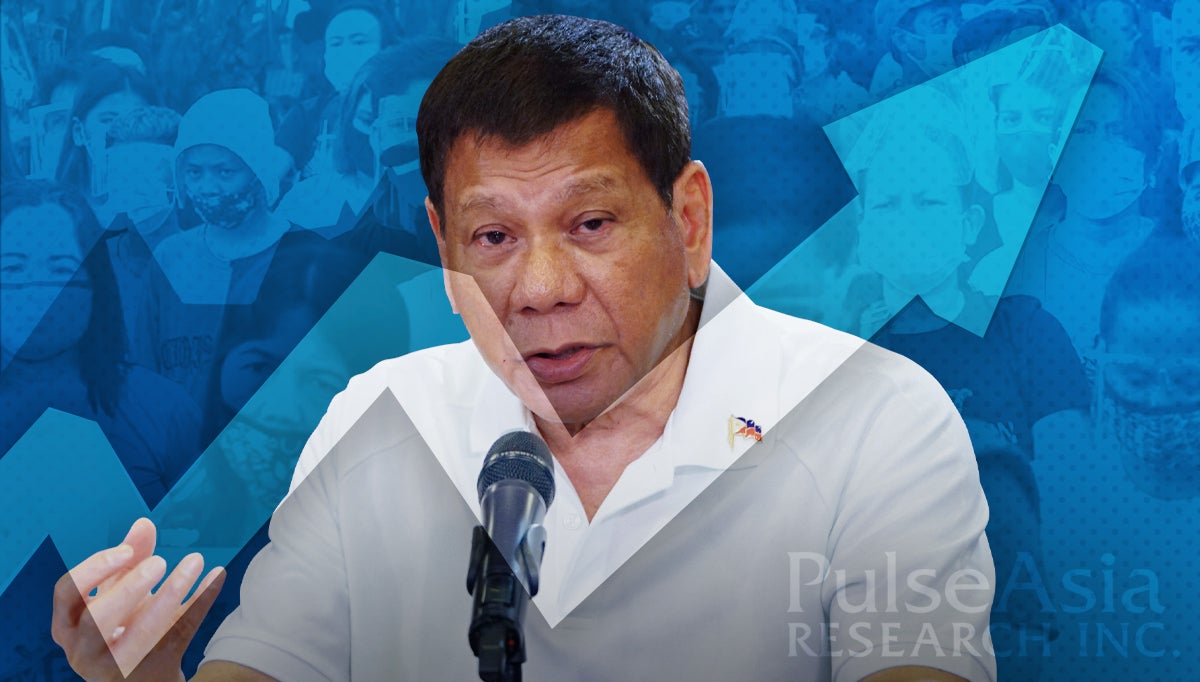 MANILA, Philippines—While many Filipino presidents’ final few months in office were hounded by the “lame duck” curse, President Rodrigo Duterte seems to have cast the spell out through record-high approval ratings—a feat not seen since polling started in the post-Marcos era.

The popularity is surviving widespread criticisms—domestically and internationally—of the way Duterte executes policy, like human rights violations in the bloody anti-drug campaign, his handling of Chinese incursions in West Philippine Sea and his relationship with media among others.

As Duterte approaches his final year in office, latest numbers indicated that the President will most likely maintain this popularity, begging the questions: How did he do it? How will this impact the 2022 national elections? Are there any dangers to having a popular president?

In October 2020, Pulse Asia released a survey showing that 91 percent of Filipinos approved of Duterte’s performance in the country’s fight against the COVID-19 pandemic, which has claimed lives and livelihood.

The survey results showed that only five percent of respondents disapproved of the President’s performance, while another five percent was undecided. 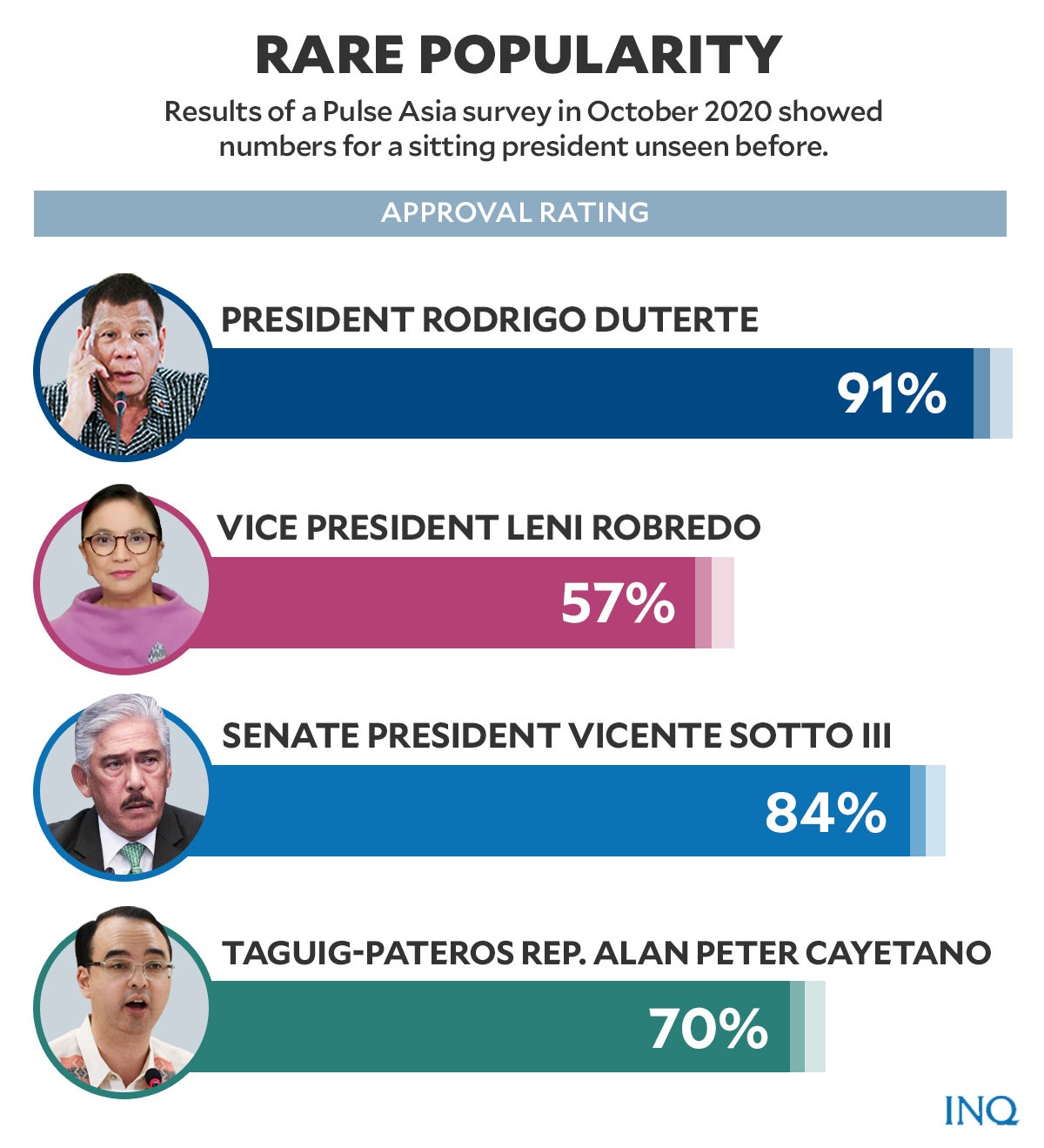 The last survey results released by Social Weather Stations (SWS) in March 2020, covering the fourth quarter of 2019, showed a net satisfaction rating of plus 73 for Duterte.

According to SWS “metrics”, this was equivalent to a rating of “excellent” which matched Duterte’s personal record-high in June 2019.

It is important to note, however, that the SWS survey was conducted in December 2019, three months prior to the declaration of enhanced community quarantine (ECQ) in Luzon, which was the Duterte administration’s first large-scale government response to the pandemic.

Pulse Asia and SWS have yet to release new survey results on Duterte’s approval ratings for 2021, the year another COVID surge in the first and second quarter prompted the national government to, again, heighten movement restrictions.

But if the Pulse Asia survey this July is to be used as a gauge, it appears Duterte’s popularity is not going away anytime soon. The survey results showed Duterte leading a list of preferred potential candidates for vice president.

‘Surprising and not surprising’

The survey results are both surprising and not surprising for University of the Philippines political science professor Dr. Aries Arugay.

According to Arugay, the survey results were surprising in the sense that Philippine presidents often suffer a lame duck period in their last few months as president as their popularity declines ahead of national elections.

A look at the history of net satisfaction ratings of past Philippine presidents—at least from SWS ratings—showed that no other president had reached Duterte’s plus 73 December 2019 satisfaction rating. The closest was the late president Benigno Aquino III who received a plus 66 rating in June 2013, about three years before he stepped down.

Historically, Philippine presidents’ satisfaction rating declined when comparing their rating when they assumed office and when they stepped down from their post.

“Duterte is popular to the point that at present, there is no political figure that could legitimately pose a challenge,” Arugay told INQUIRER.net. “It’s like this, if the question is, will Duterte win if he runs in the elections today? The answer will be yes,” he said.

Fear factor in a wartime president

Arugay views Duterte’s presidency as that of a wartime president, which translates to the public as a president who is “always in action and is always ready to do something.”

“That is his default setting. If you are a warrior president, you need a war at all costs. If there are no enemies, he will create enemies may it be domestic or external,” Arugay said.

But this has also led to the administration instilling a climate of fear in the country, which may or may not, affect those who responded to the surveys, said Arugay.

Arugay cited the denial of the franchise application of media giant ABS-CBN back in July 2020. Months prior to that, Duterte had repeatedly said in public that he would not allow ABS-CBN to operate again as long as he is in power. He continued to take the then broadcast giant to task for allegedly not airing his 2016 election ad and for alleged biased reporting against him.

Presidential spokesperson Harry Roque insisted that Duterte had been “neutral” on the franchise application of ABS-CBN.

“What the Duterte administration cannot deny is it has instilled a climate of [fear] in the country. And that is part of where he gets his power from,” said Arugay.

“We see this in mass media, some are not as critical as before because they don’t want to be the next ABS-CBN,” Arugay said.

“This is part of the strongman playbook. We’ve seen this in others,” he added.

University of the Philippines political science associate professor Dr. Jean Encinas-Franco said that Duterte was able to maintain his popularity because he was consistent in character. What people saw in him in the 2016 elections remained true to this day.

Arugay said that while some presidents would allow power to transform them, Duterte instead used it to “amplify the characteristics that he already has” and projected it from the local to the national level.

A stronghold of government

Another contributing factor to Duterte’s continuing popularity was that the President was also able to successfully consolidate his power, said Arugay.

“The Philippines’ political system was built supposedly for checks and balances, the power is divided,” Arugay said.

“Supposedly, co-equal and independent branches check one another. But unlike other presidents, President Duterte was able to assert his domination even in other fields,” Arugay said.

Duterte currently enjoys a supermajority in the House of Representatives composed of at least 275 congressmen and party-list representatives, leading the lower chamber to be dubbed the President’s “rubber stamp” where his orders and requests are never turned down.

House Majority Leader Martin Romualdez, however, denied this saying that the minority bloc in the lower chamber was always given priority during deliberation of measures.

Nonetheless, Romualdez admitted that it is still a “numbers game” at the end of the day.

“They are barely 10 percent of the members of the House, yet they dominate not only in the rules committee hearings of being given preference, but the time and the hours actually given to them to articulate to voice, to interpellate, to basically challenge and criticize,” Romualdez said in an interview with INQside Look.

“Nonetheless whether you have 10 percent or 40 percent, you know it still comes down to a vote and that’s why we are called the majority,” he added.

How did Duterte maintain this power and hold in government? Arugay said it has something to do with Duterte’s public action against those who he views as adversaries.

“It has something to do with his reaction towards adversaries that he will not simply defeat you, he will pounce you to the ground and we have seen how he has treated entities that he has considered enemies from communists to ABS-CBN,” Arugay said.

To “veer away from the administration line” means being “taken out of the ship”, Arugay added.

Duterte has faced numerous controversies in his presidency like the bloodshed that accompanied his campaign against drugs and government response to the pandemic which critics said was insufficient.

Two experts recently said that the Duterte administration “underperformed” in its response to the coronavirus pandemic and failed to meet its own targets.

In 2020, about 4.5 million Filipinos also became jobless, with the unemployment rate jumping to 10.4 percent—the highest in 15 years. As of July 18, more than 1.5 million COVID-19 cases have been recorded in the country, with 26,714 dying of the disease.

The drug campaign was also put in the spotlight once again after former International Criminal Court (ICC) prosecutor Fatou Bensouda said “there is a reasonable basis to believe that the crime against humanity of murder has been committed” in relation to Duterte’s anti-drug policy.

Despite this, Duterte enjoys popularity among those in Classes D and E—commonly deemed as the masses—which critics point out as those who are suffering from human rights abuses in the war on drugs.

How was Duterte able to maintain his popularity despite the alleged human rights abuses in the drug war?

“The question that needs to be asked, who is also the most affected by the insecurity that the illegal drug problem brings to a community?” Arugay said.

“In the communities, if you don’t have a job, you will be a drug mule. If you don’t do drugs, you will also be affected by the drug war because your community becomes unsafe, you are victimized by the crimes,” Arugay said.

He added: “The rich have protected themselves to a certain extent that the threat of drugs does not affect them in terms of drug-related crimes. That’s not the case for ordinary Filipinos.”

The rise of disinformation

“People tend to believe what they want to believe and if they believe in disinformation, then it’s very easy for them to focus their analysis and their views about Duterte on that piece of information,” Encinas-Franco said.

This is where mass media and civil society groups come in and with the upcoming elections, policies should be in place to combat disinformation, Encinas-Franco said.

“A lot of people can engage in efforts to monitor disinformation online,” Encinas-Franco said.

This was backed by Arugay: “Unless there is a massive policy shift on both parts—meaning the government and the social media platforms—it will just continue.”

Dangers of a popular president

There are, however, dangers to having a popular president, said Arugay.

“Popularity comes with a lot of unintended consequences. A popular president might not be a humble president and he feels invincible,” Arugay said.

While a popular president can also make a decisive president, a bit too much of it makes one a president “that doesn’t get constrained and restrained by political institutions and the law”, said Arugay.

A popular president may also have the tendency to no longer study the impact of policies being implemented, said Encinas-Franco.

“You no longer study whether policies that you formulate are actually beneficial to the people in the long run, you try to please them even if it’s bad for them in the longer term,” Encinas-Franco said.

Encinas-Franco said that the opposition cannot simply rely on old strategies if it wants to topple Duterte’s popularity ahead of the 2022 elections.

“Even if it makes sense to hold Duterte accountable for reported human rights violations, for his supposed bungled response to COVID, they have to find another way to turn the people against Duterte’s candidate in the 2022 elections because as you can see in the surveys, it’s not working,” Encinas-Franco said.

“The way I think of it is you cannot engage in the same message that Duterte is engaging,” she added.

For Arugay, the 2022 elections will be the “referendum” on Duterte’s performance.

The results of the 2022 elections may as well answer the question if indeed Duterte is the most popular post-Marcos president.