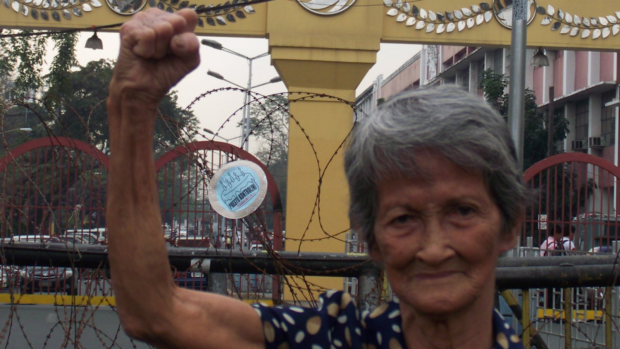 FEISTY. Carmen “Nanay Mameng” Deunida raises her fist during a rally in Mendiola. PHOTO FROM URBAN POOR RESOURCE CENTER OF THE PHILIPPINES

Carmen Deunida died an activist at the age of 93, leaving behind a story that mirrors the unending narrative of poverty that ruler after ruler failed to eradicate in a country so rich in resources yet so teeming with inequality.

Deunida fits the definition of an activist, but hers was a life of struggle rooted in the desire to rise from abject poverty that didn’t change along with the change of leaders governing the country.

She knew how it is to be poor, seeing the causes of poverty up close since the Marcos dictatorship, its downfall and the transition to democracy that produced president after president that failed to bring the kind of change that would have allowed Deunida to rest and tell herself the fight has been won.

Known to fellow activists as “Nanay Mameng”, Deunida would not know what gross domestic product meant for her and her equally impoverished neighbors, friends, relatives and colleagues in activism.

But she knew that being poor meant missing meals, living on the streets, seeing your children cry because of hunger, failing to send your children to school and knowing that poverty will not disappear the next day or many more days after.

She lived it and knew what was causing it.

While millions of other people suffering from the same fate as Deunida did would sit in silence hoping one day things will change, Deunida chose to make noise, call attention to the poor’s plight and the reasons for it. 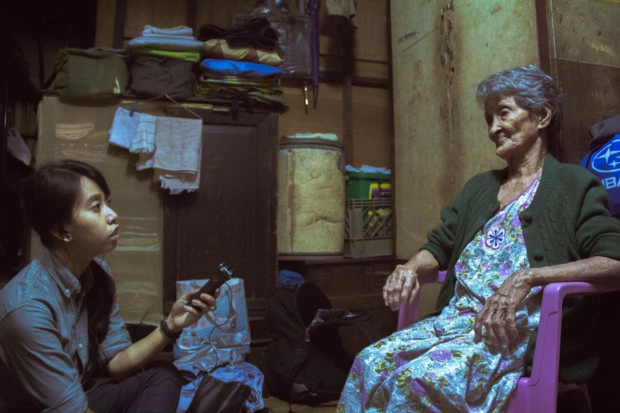 HEART TO HEART. Amanda Echanis, an activist who was arrested in 2020, interviews Deunida. PHOTO FROM KADAMAY

Her fellow activists best remember Deunida for what she promised.

“I will fight as long as blood streams through my vein. I will only stop if I’m already lying inside a coffin.”

These words live even after Deunida’s death last July 19, a week after she spent days in the intensive care unit of Philippine General Hospital for breathing difficulty.

The group that Deunida served for 10 years, Kalipunan ng Damayang Mahihirap (Kadamay), considers her as a leader and “mother of the urban poor struggle.”

In an interview with INQUIRER.net, Kadamay Chair Gloria Arellano said Deunida was true to her words.

Born in 1928, Deunida was 50 years old when she became an activist in Leveriza, Pasay in 1978. She was the oldest member of Kabataan para sa Demokrasya at Nasyunalismo, a youth group at the time of the Marcos dictatorship.

“She faced several challenges as a poor woman and leader during the Marcos dictatorship,” said Arellano.

Deunida survived the Marcos dictatorship during which, data from MartialLawMusem said, four out of 10 families were poor before Marcos took office and grew to six out 10 families rated poor by the time his kleptocratic rule ended.

Bayan Secretary General Renato Reyes, on a Facebook post, said domestic violence was one of the driving factors for Deunida’s activism. She stood for women and the urban poor even after the reign of Marcos ended. 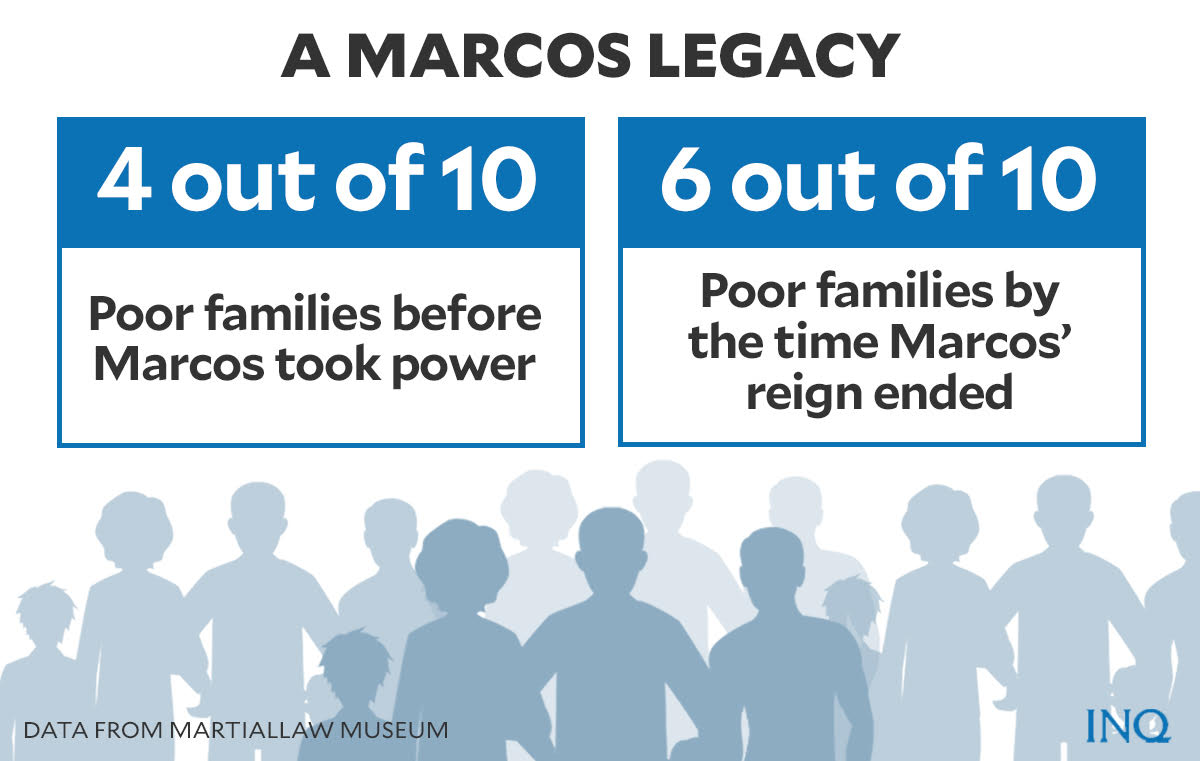 Kadamay said Deunida’s ability to speak in protests is remarkable: “She was able to describe the crisis and struggles of the urban poor through her voice and simple, but straightforward language.”

Twenty years after she became an activist, she was elected as the first Kadamay in November 1998. Since then, she dedicated the rest of her life fighting for the poor. 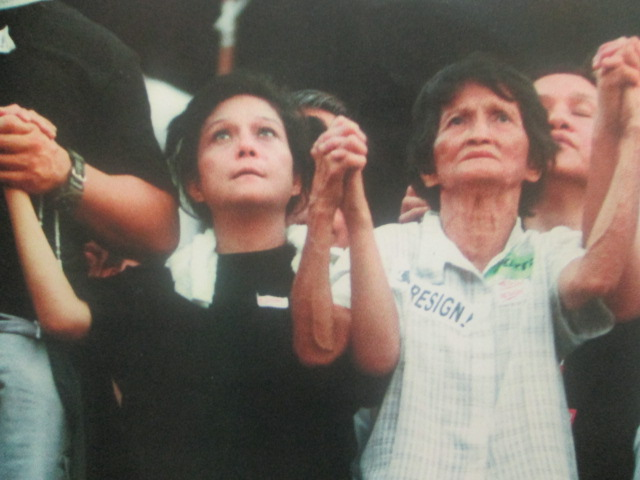 Arellano said that Deunida played a significant role during the Edsa People Power 2 revolt in 2001 which ended the corruption-ridden rule of Joseph Estrada.

“She led the broad group of the poor who were already done with Estrada’s outright lies and corruption,” Kadamay said.

In 2007, Estrada was meted life sentence for plunder, four counts of corruption, involving diversion of funds which, a Reuters report said, amounted to about P4 billion. His successor, Gloria Macapagal Arroyo, pardoned Estrada, averting his long stay in jail.

“No doubt, the exploiters were shaken by her voice. No doubt, when Nanay Mameng speaks, everyone listens,” Kadamay said.

“Her statements serve as a guide and then become the words of activists and organizers,” said the group.

Fight for the poor

Deunida, Kadamay’s leader from 1998 to 2008, also had a significant role in protests against Arroyo’s nine-year reign, the longest-running since the Marcos dictatorship.

Ibon Foundation said poverty has continued to rise even with the government’s low official poverty line. Poor families increased by 530,642 in 2000 to 4.7 million in 2006.

“As it is, household real incomes fell by an average of 20% across all surveyed homes between 2000 and 2006– the recorded 19% increase in nominal income over the period was easily offset by the 38% rise in prices,” it said.

In 2014, “Nanay Mameng, isang dula,” was staged at the Polytechnic University of the Philippines’ College of Mass Communication. It depicted not only her life, but also the struggle of the Filipino people.

In Benigno Aquino III’s term, Deunida did not mince words in condemning the late president’s veto of a bill which sought pension hike for Social Security System members.

As Rodrigo Duterte ascended to the presidency in 2016, Deunida, who was 88 when Duterte came to power, still braved the heat, the rain, and the threats of state dispersal in protests to speak for the poor.

“She was tireless,” Arellano said.

She said that even in the midst of the COVID-19 contagion last year, Deunida was around, especially when 21 residents of Sitio San Roque in Quezon City were arrested by police after refusing to disperse and go home when they gathered to ask for help and food from the local government.

Last Feb. 8, Kadamay was with Deunida to celebrate her 93rd birth anniversary.

“She had her last wishes – the release of political prisoners and the end of the present regime.”

Data from human rights group Karapatan showed there are 715 political prisoners in the country. Of the total count, 489 were arrested by the Duterte administration. 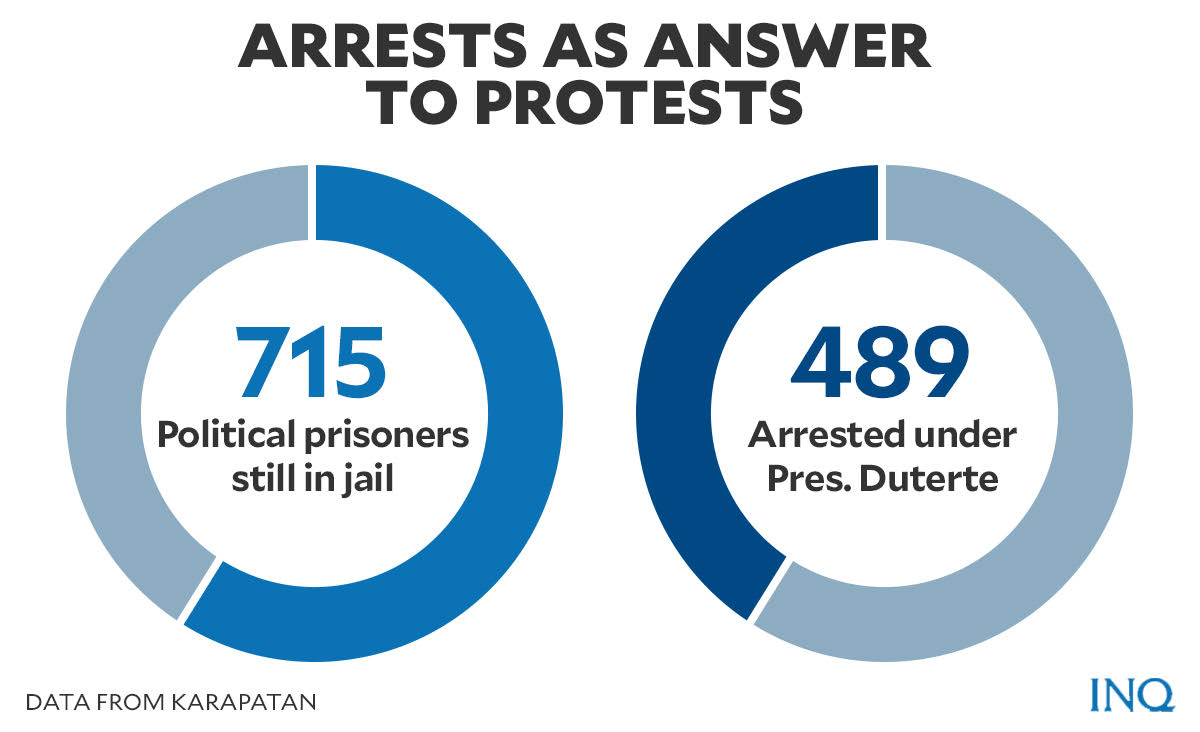 Arellano said Deunida will not be forgotten by those who worked with her, especially the youth who saw her as an example of activism.

“She’s inside a coffin now, but contrary to what she said, she is not gone because she will be in our hearts, especially in times that we stand for the things she fought for,” said Arellano.

A 2017 National Demographic and Health survey in the Philippines said that one in four Filipino women aged 15-49 has gobe through physical, emotional or sexual abuse by their partner or husband. Because of the COVID-19 lockdown, cases of domestic violence increased to 2,246.

Recently, results of a Social Weather Stations survey said that an estimated 4.2 million families experienced hunger “due to lack of food” and that 49 percent of families considered themselves poor.

Kadamay said that with injustice and inequality still around, “Nanay Mameng left us with a challenge and reminder: Give everything, trust the strength of the masses.”