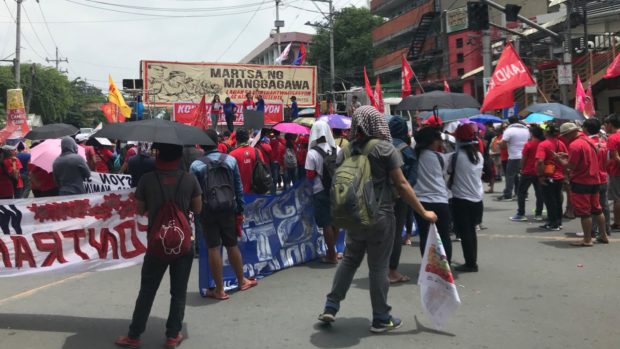 MANILA, Philippines — The Department of Labor and Employment (DOLE) is reviving a botched campaign promise of President Rodrigo Duterte to make a priority of his administration the passage into law of a bill that would remove the practice of labor contractualization, or “endo.”

DOLE Secretary Silvestre Bello said Wednesday that he has again recommended to Duterte to sign the “anti-endo” bill as urgent.

“I just signed the letter addressed to our President, recommending the issuance of a certification, to certify yung ating endo bill pending before the Senate,” Bello said in a televised briefing.

Asked what were the difference between the two endo bills, Bello said: “Substantially, parehas lang naman.”

Earlier, Duterte’s adviser for political affairs, Jacinto Paras, who is also concurrent legislative liaison assistant said that the anti-endo bill is no longer a priority of the administration. Paras used to be an undersecretary of DOLE under Bello.

It was in 2019 when Duterte vetoed the Security of Tenure bill aiming to stop the end of contract scheme or “endo.”

In his veto message then, Duterte said the proposed law “unduly broadens the scope and definition of prohibited labor-only contracting, effectively proscribing forms of contractualization that are not particularly unfavorable to the employees involved.”

Bello said the President was ready to sign the measure into law then, but many labor groups opposed the bill.

(The President was ready to sign it into law, the problem is that some labor groups opposed that bill.)

Ending the practice of labor contractualization was among Duterte’s campaign promises in 2016.