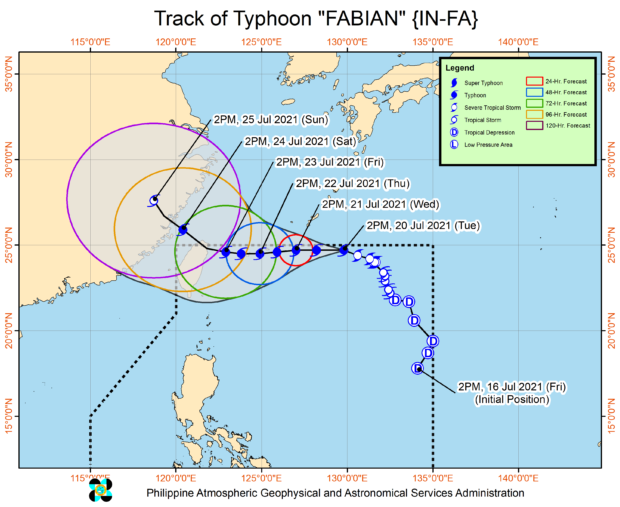 Two typhoons are flanking both sides of the country, as Typhoon Fabian (international name: In-fa) on the northeastern side and Cempaka on the west both gained strength on Tuesday, the weather service said.

Fabian intensified into a typhoon at 2 p.m. on Tuesday and blew winds of up to 120 kilometers per hour near the center and gusts of up to 150 km per hour, said the Philippine Atmospheric, Geophysical and Astronomical Services Administration (Pagasa).

As of 4 p.m., its eye was estimated at 895 km east northeast of extreme northern Luzon. It moved toward the northwest at 15 kph.

Pagasa said Fabian packed strong winds extending up to 600 km from the center.

Based on the latest forecast scenario, tropical cyclone wind signal No. 1 may be declared in Batanes and Babuyan Islands due to the typhoon, although it is unlikely to bring heavy rainfall throughout the week.

Moving generally westward until Friday, it is expected to pass close or make landfall in the Ryukyu archipelago, a string of islands that is part of Japan, on Thursday. By Friday evening or early Saturday, Fabian is seen to exit the Philippine territory.

Cempaka, meanwhile, was estimated at 985 km west of extreme northern Luzon at 3 p.m. on Tuesday. Moving north-northwestward slowly, the typhoon packed winds of up to 130 kph near the center and gusts of up to 180 kph.