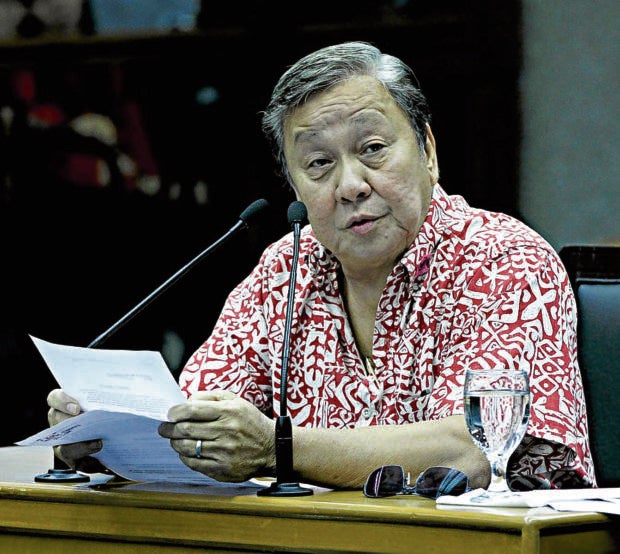 MANILA, Philippines — Deputy Speaker Lito Atienza on Tuesday called on personalities involved in the power struggle in the ruling Partido Demokratiko Pilipino-Lakas ng Bayan (PDP-Laban) to refrain from belittling the role of one of its founders, former Sen. Aquilino “Nene” Pimentel Jr., in restoring democracy in the country.

While he named no names, Atienza issued the statement days after President Rodrigo Duterte said the party was “asleep for a hundred years” and only woke up when he ran for the presidency in 2016.

Duterte even told members of the Cusi-led faction of PDP-Laban in an assembly at Clark Field in Pampanga on Saturday that it was just ”a father and son party” before 2016.

The president said Pimentel and his son, Sen. Koko Pimentel, were not even recognized in their hometown Cagayan de Oro City.

But Atienza described the older Pimentel as “one of the most genuine and real patriots” who never worried about his own safety and comfort.

“His only concern was to liberate the nation from martial rule and Mr. Marcos’ dictatorship,” he said.

“I witnessed the genuineness of his desire to restore our rights and freedom, which we are now enjoying. Do not belittle and ignore the contributions of Nene,” he added.

Atienza said he and Pimentel both opposed the Marcos dictatorship.

“Nene Pimentel and Ninoy Aquino both deserve revered positions in our memory and history,” he said.