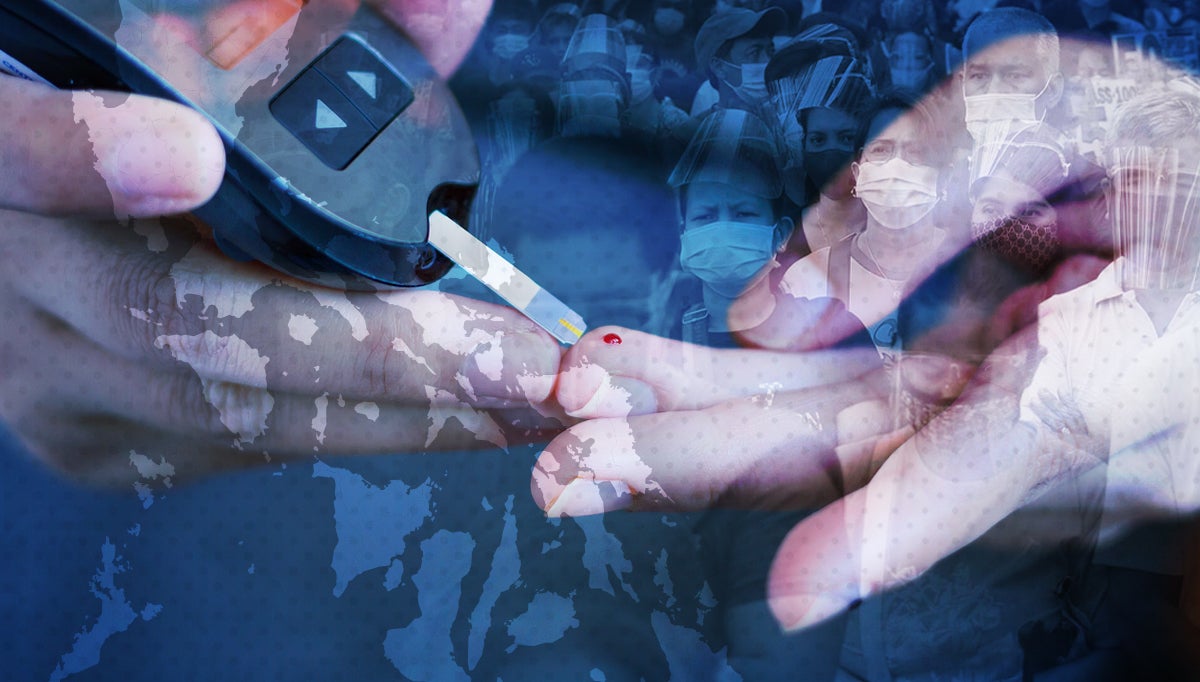 MANILA, Philippines—Every fourth week of July, the Philippines observes Diabetes Awareness Week, in the hope of increasing awareness about the disease.

Diabetes, a serious and chronic metabolic disease characterized by an increase in blood sugar levels, has been consistently one of the top 10 leading causes of death in the Philippines through the years.

From the growing number of cases in the country to ways of preventing the disease, here are some things you might need to know about diabetes.

In the Philippines, 1 in 14 Filipino adults lives with diabetes. 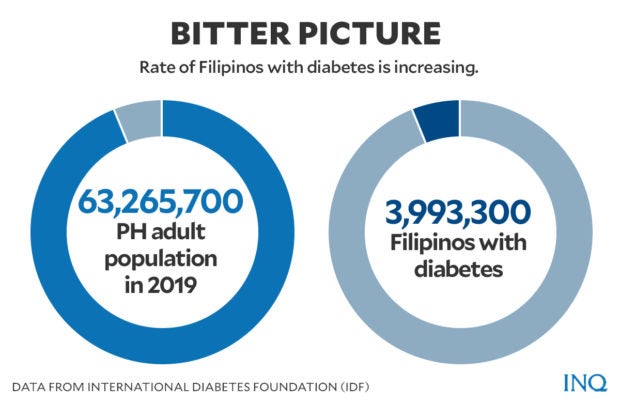 As of 2019, International Diabetes Federation (IDF) data showed that 3,993,300 of the then total 63,265,700 Filipino adult population have diabetes, with a 6.3 percent prevalence of diabetes in adults. 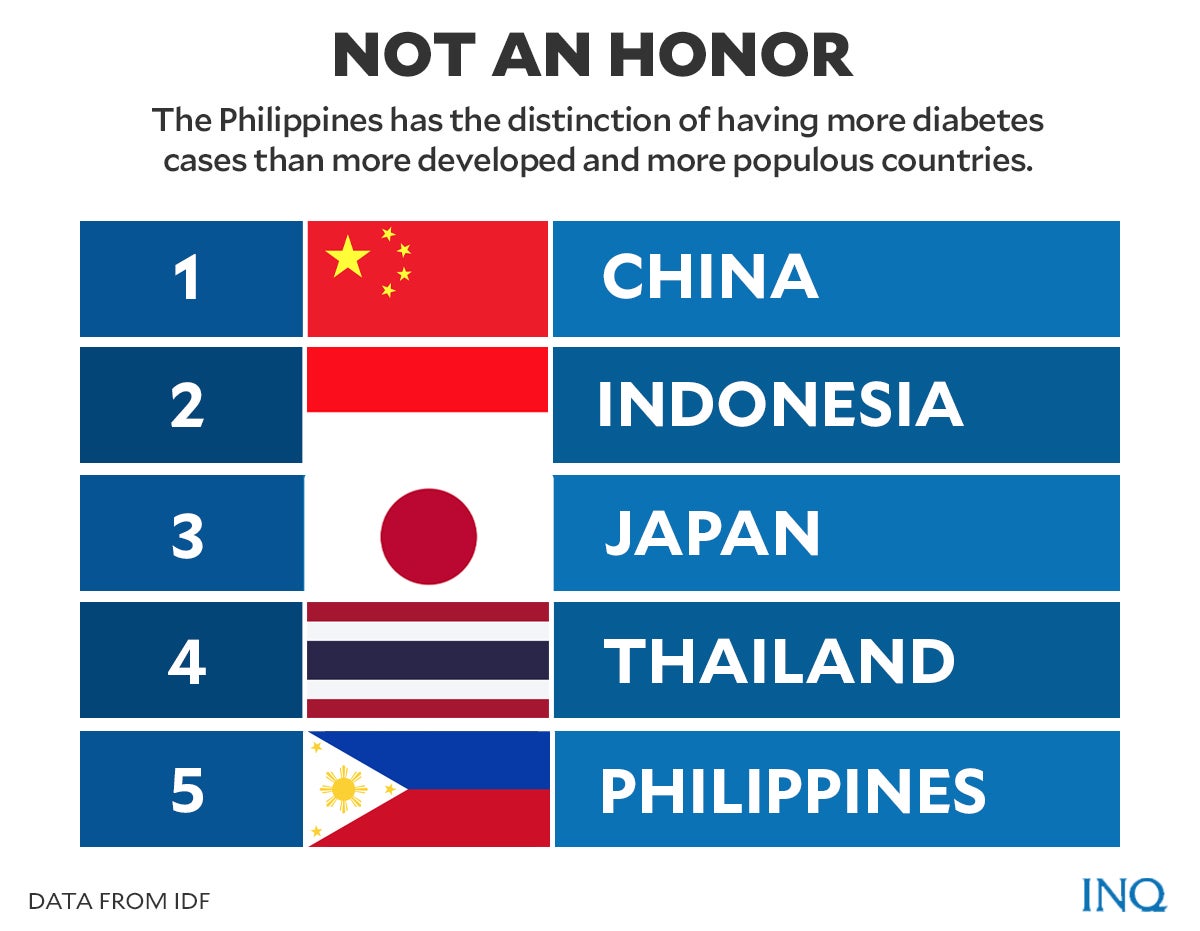 In the Western Pacific, the Philippines ranks fifth—behind China, Indonesia, Japan, and Thailand—in the number of diabetics.

IDF, an umbrella organization of over 230 national diabetes associations in 170 countries and territories, projected that by 2030, the number of adults with diabetes in the Philippines will further rise to 5,289,700 and an estimated 7,267,400 by 2045. 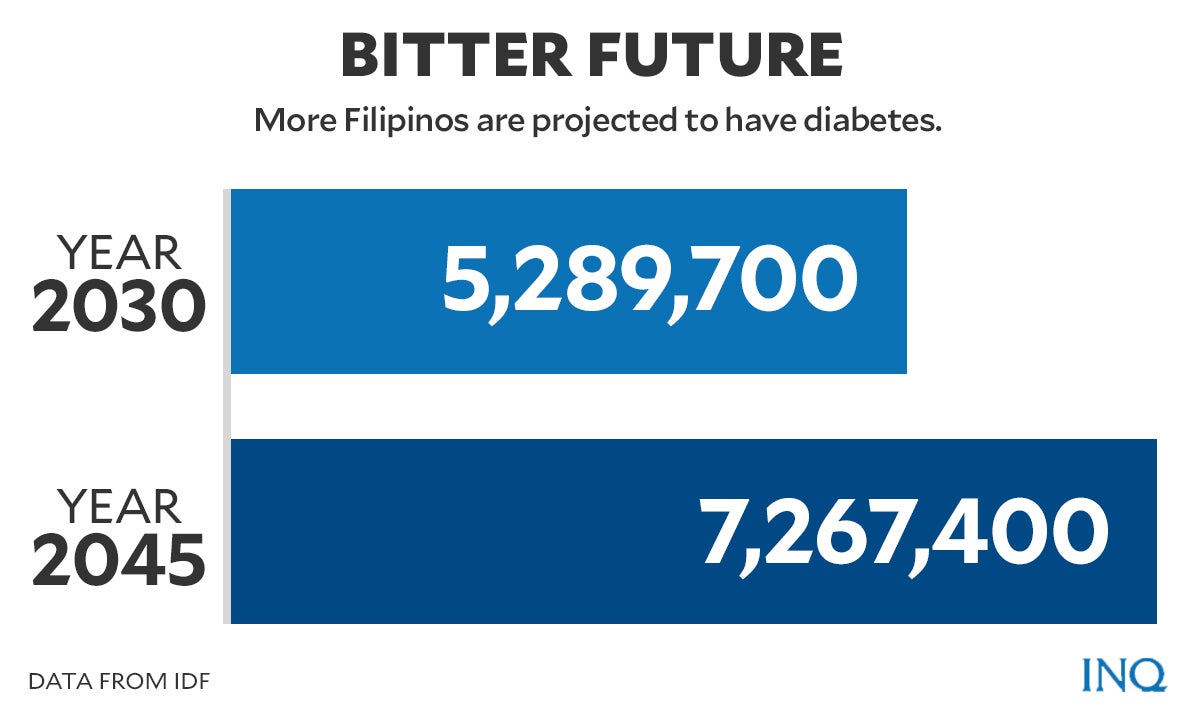 “Diabetes continues to be a major problem. In fact, I would consider it an epidemic now in the Philippines,” said Dr. Joven Cuanang in 2019.

The mortality rate among Filipinos from the disease has also increased during the past years.

Data from the Philippine Statistics Authority (PSA) showed that from January to December 2020, diabetes Mellitus ranked fourth as the leading cause of death in the country.

According to World Health Organization (WHO), diabetes occurs when the pancreas — an organ that plays a huge role in digestion — does not produce enough insulin — a hormone which regulates blood sugar.

It also happens when the body cannot effectively use the insulin it produces.

There are three types of diabetes:

Those who have this type of diabetes will need to take insulin daily.

This type results from the body’s ineffective use of insulin. It may also be caused by excess body weight and physical inactivity, according to WHO. At least 90 to 95 percent have type 2.

“It develops over many years and is usually diagnosed in adults (but more and more in children, teens, and young adults). You may not notice any symptoms, so it’s important to get your blood sugar tested if you’re at risk,” CDC explained.

Unlike type 1, type 2 diabetes can be prevented or delayed through lifestyle changes like losing weight, having a healthy diet, and being active.

This type develops in pregnant women who have no history of diabetes, according to the CDC, and can be diagnosed through prenatal screening.

Over time, the Department of Health (DOH) said, diabetes may lead to several complications such as wounds that would not heal, impotence, blindness, kidney failure, stroke, or heart attack.

How to tell if someone has diabetes?

According to the DOH, among the tell-tale signs of diabetes are:

The WHO mentioned constant hunger, vision changes, and fatigue as some symptoms that might occur suddenly among people with diabetes.

While genetics, age, and family history can increase the likelihood of becoming diabetic, certain behaviors can also increase the risk.

Among those who are at risk of getting diabetes were:

A study previously published in the Journal of the ASEAN Federation of Endocrine Societies found that obesity, smoking, alcohol intake, caloric intake, and carbohydrate intake can be factors in the prevalence of diabetes among Filipino young adults.

According to Angelique Bea Uy of the UP College of Medicine (UPCM), and Cecilia Jimeno of the UPCM’s Department of Pharmacology and Toxicology, young Filipinos are at higher risks of developing diabetes if: 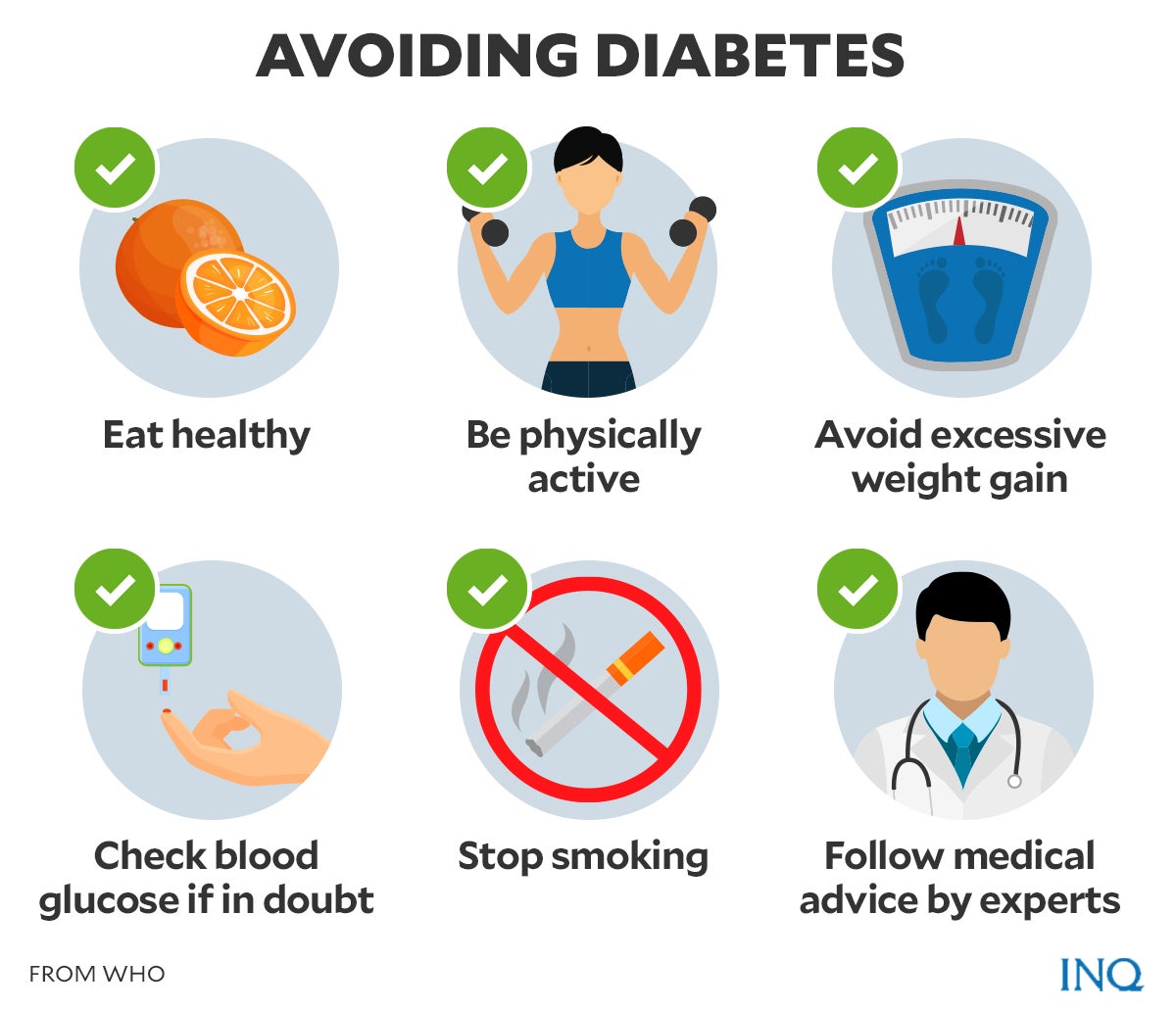 The WHO recommended the following key actions which can help prevent or treat diabetes.

Governments were also advised to ensure having healthy environments, better diagnosis and treatments for diabetes patients, and better data on the disease.

There are also interventions that are both cost-saving and feasible in low- and middle-income countries like:

Lockdown cuts off gov’t aid for vendor suffering from diabetes

A love language like no other: Defeating diabetes amid the pandemic

Pandemic tied to sharp rise in type 2 diabetes in kids

Read Next
P10-M worth of illegally imported red onions from China seized
EDITORS' PICK
Smart offers wireless fiber-like speeds to Filipino homes with country’s first 5G Prepaid Home WiFi
Legarda: Ending Violence Against Women, a cause for all
This new condo in the South will make you want to turn a new leaf
National COVID-19 vaccination drive gets over 5.3 million people vaxxed so far
Pandemic prognosis: Where does it go from here?
Google won’t accept election ads for 2022 national polls
MOST READ
Bongbong Marcos to face another disqualification case
Christine Bersola, Julius Babao cleared of cancer after colonoscopy, endoscopy
A Merry Bongbong
Pandemic prognosis: Where does it go from here?
Don't miss out on the latest news and information.