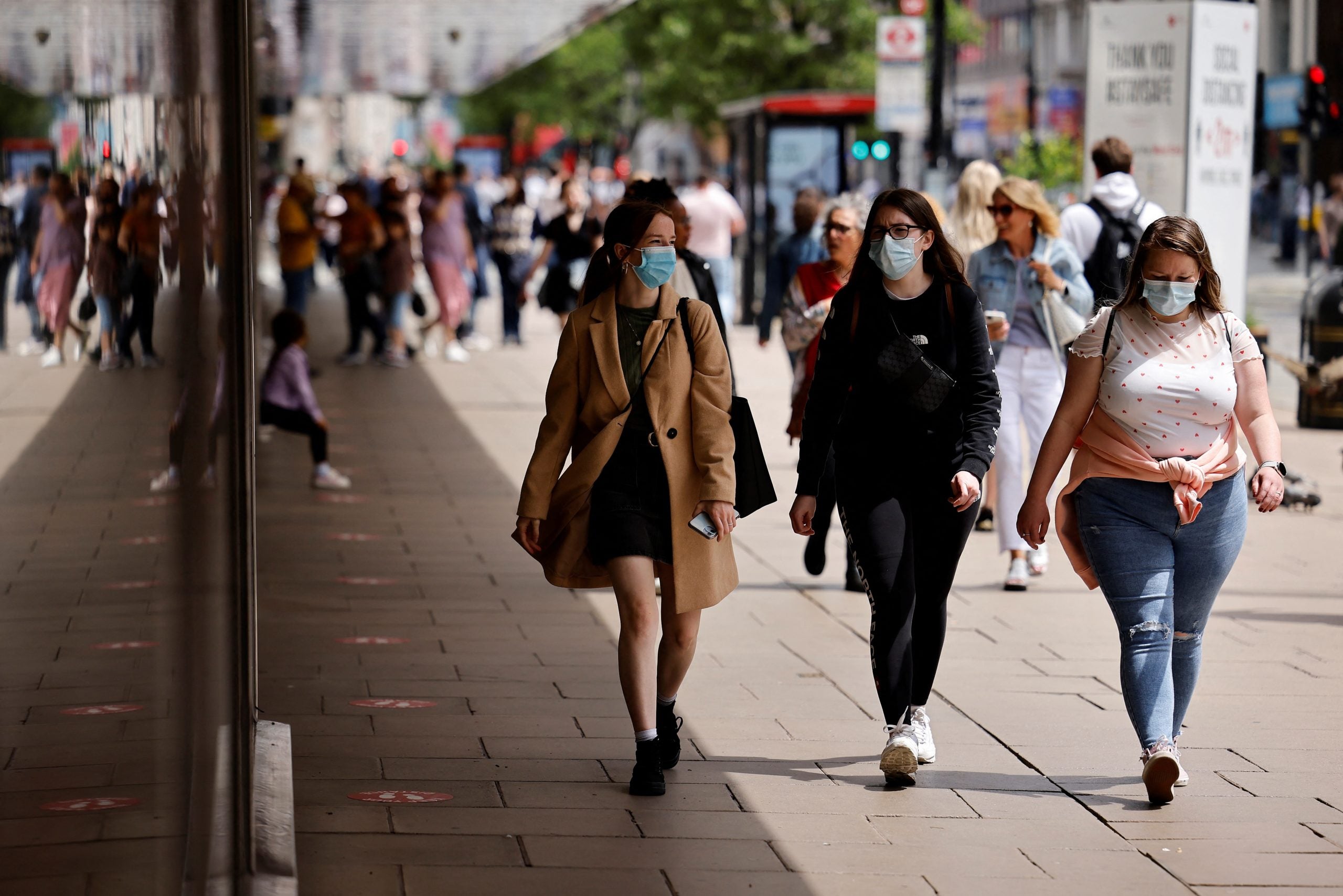 Pedestrians wearing a face mask or covering due to the COVID-19 pandemic, walk along Oxford Street in central London on June 6, 2021.  (Photo by Tolga Akmen / AFP)

LONDON, United Kingdom — The British government on Monday lifted pandemic restrictions on daily life in England, scrapping all social distancing in a step slammed by scientists and opposition parties as a dangerous leap into the unknown.

From midnight (2300 GMT Sunday), nightclubs were able to reopen and other indoor venues allowed to run at full capacity, while legal mandates covering the wearing of masks and working from home were scrapped.

Prime Minister Boris Johnson — who is self-isolating after his health minister was infected — urged the public to remain prudent and for any laggards to join the two-thirds of UK adults who are now fully vaccinated.

He defended the reopening — dubbed “freedom day” by some media — despite scientists’ grave misgivings after daily infection rates in Britain topped 50,000, behind only Indonesia and Brazil.

“If we don’t do it now, then we’ll be opening up in the autumn, the winter months, when the virus has the advantage of the cold weather,” the prime minister said in a video message.

This week’s start of summer school holidays offered a “precious firebreak”, he said.

“If we don’t do it now, we’ve got to ask ourselves, when will we ever do it? So this is the right moment, but we’ve got to do it cautiously.”

“We are against opening up without any precautions in place,” Ashworth told BBC television, attacking in particular the government’s plan on masks.

After the success of the vaccination programme — which has now offered at least one dose to every adult in Britain — the government says any risks to hospital care are manageable.

But professor Neil Ferguson from Imperial College London warned that Britain was on course for 100,000 cases a day, as the Delta variant of Covid runs out of control.

“The real question is, do we get to double that or even higher? And that’s where the crystal ball starts to fail,” he told BBC television.

Even if Britain is suffering far fewer deaths than in previous waves, such a caseload would still put severe pressure on the National Health Service (NHS) and risks seeding new variants, medics warned.

Senior Conservative MP Jeremy Hunt, a former health secretary, said the government should learn from Israel and the Netherlands, which have been forced to reverse recent relaxations.

“The warning light on the NHS dashboard is not flashing amber, it is flashing red,” he told BBC radio.

Scotland and Wales, whose devolved governments set their own health policy, said they would maintain the mandate on face coverings among other restrictions.

But in England, all restrictions on social mixing were lifted. Sports stadia, cinemas and theatres can now return to full houses.

Fully vaccinated residents returning from “amber list” destinations in Europe no longer have to quarantine — although in a last-minute policy shift, the government has kept the requirement in place for France.

Also staying in place are requirements to self-isolate after a close contact, which have forced millions off work or school in recent weeks, leading to industry warnings of severe economic disruption.

After their contact with Health Secretary Sajid Javid, Johnson and finance minister Rishi Sunak initially tried to use an official testing pilot scheme that enables participants to escape full self-isolation.

But after a public and political outcry, Downing Street staged a hurried U-turn.

Johnson, who nearly died of Covid last year, will remain at the prime minister’s country retreat at Chequers northwest of London until July 26.

“We did look briefly at the idea of us taking part in the pilot scheme which allows people to test daily,” he said.

“But I think it’s far more important that everybody sticks to the same rule.”

Others urged the government to stick to the cautious global consensus on tackling the pandemic, rather than acceding to the libertarian instincts of Johnson and other Conservatives.