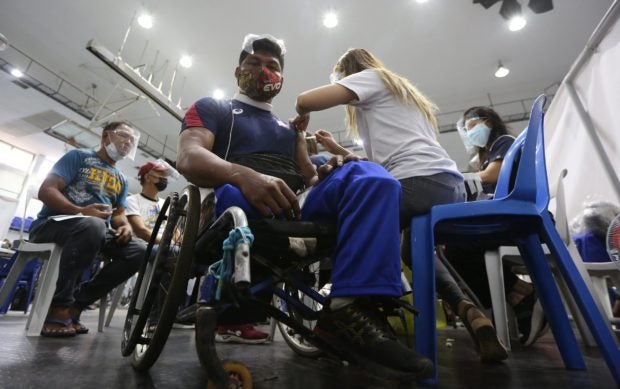 PRIORITY, TOO Persons with disabilities receive the first dose of Pfizer vaccines on Saturday at the Pasig Sports Center in Pasig City. —NIÑO JESUS ORBETA

MANILA, Philippines — Health experts have warned that a community transmission of the more contagious Delta variant of COVID-19 was already taking place and the Philippines must brace for another surge in infections following the detection of the virus in 11 persons who did not travel abroad.

The Department of Health (DOH) last week confirmed the local infections of the Delta strain, but remained silent on local transmission as it continued to investigate the link among these cases.

But government adviser Dr. Edsel Salvana said he would rather wait for the genome data in order to map out the variant transmission.

“If the different places show very closely related viruses, then that may be the case. But if they show different genome sequences, then these are separate introductions,” he said in a text message.

The Delta variant was first reported in India and continues to wreak havoc in many countries across the globe.

In a Viber message on Sunday, Solante, who also sits in the government’s Vaccine Expert Panel, shared questions that ought to be answered: “Where did these local cases come from? Are they index cases or secondary cases?” An index case refers to the first patient in a certain population.

He said that the Delta cases being “clustered” in different regions was already “a sign that a possible local transmission is already happening.”

“Our local transmission of Delta variants is underreported due to lack of genome surveillance studies particularly in hot spots outside of the NCR (National Capital Region),” Leachon said.

Leachon earlier pushed for the inclusion of Indonesia in the Philippines’ travel ban and said he would do the same with Malaysia and Thailand due to their present Delta variant surges.

Philippine National Police chief Gen. Guillermo Eleazar on Sunday ordered the fielding of more cops to stop superspreader events that could worsen the local spread of the Delta strain.

He warned organizers of such events that they would be facing charges.

Eleazar directed police commanders to coordinate closely with local government units (LGUs), particularly barangays, to ensure minimum health standards were being observed and no mass gatherings were held in their areas.

The Philippine General Hospital (PGH) and several other medical facilities were likewise on heightened alert to ward off a potential surge of the Delta variant.

On Sunday, the DOH has also laid out a two-level surge response—at the community or in a facility—that included stocking up on medicines and closing the supply gap in oxygen, according to a communication sent to hospitals on July 16.

The DOH said the government must ensure an adequate supply of oxygen for COVID patients as the country’s current daily consumption of 74,400 cylinder tanks was estimated to double in case of a surge.

The DOH also recommended face masks even at home when living with an elderly or a person with an underlying health condition.

Solante, also an infectious disease expert at San Lazaro Hospital, said they were similarly on a heightened alert and have started conducting an inventory of medicines and respirators.

“Some individual hospitals issued strict observance of protocols to avoid the spread of the new variant [but] we are ready for any unusual increase in COVID patients,” said Dr. Jose Rene de Grano, president of the Private Hospitals Association of the Philippines Inc.

In a July 12 memorandum to the PGH staff, hospital director Gerardo Legaspi detailed stricter guidelines such as staggered lunch breaks to prevent crowding, 2-meter space between office tables, and the automatic pullout and a 14-day quarantine of an unvaccinated or partially vaccinated employee once exposed to the virus.

On Sunday, The DOH reported 5,411 new COVID cases, bringing the country’s total to 1.51 million. The number of recoveries also rose to 1.43 million as 5,439 more people survived the disease. The death toll rose to 26,714 with the addition of 117 people succumbing to COVID.

With various parts of the country under different community quarantine classifications, the Department of the Interior and Local Government (DILG) has also asked local authorities to make sure their regulations were consistent with the policies of the Inter-Agency Task Force for the Management of Emerging Infectious Diseases (IATF).

“They use as basis the Local Government Code which [empowers] them to enact resolutions, ordinance and they also issue executive orders, but these must be in conformity and consistent with the national policies, especially the guidelines issued by the IATF,” Interior Secretary Eduardo Año said on Friday.

He said there were many local regulations issued in the first six months of the pandemic that conflicted with national policies set by the IATF, although these were all ironed out by the DILG following dialogues with the LGUs involved.

—With reports from Jeannette I. Andrade, Jerome Aning and Dona Z. Pazzibugan