Of bells and bills: More on Duterte’s Sona targets 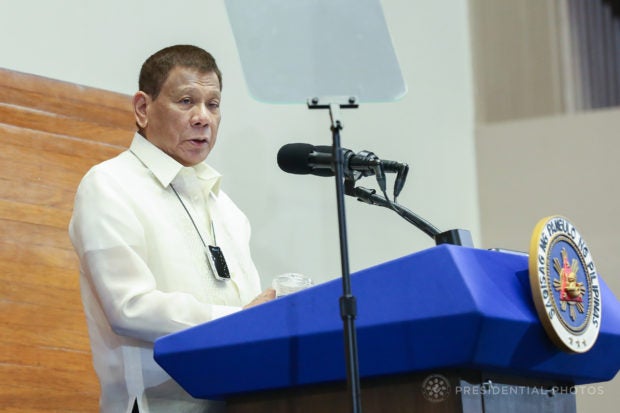 MANILA, Philippines — This installment reviews what has become of President Rodrigo Duterte’s specific action plans as spelled out in his second State of the Nation Address (Sona), which he delivered on July 24, 2017.

• Strengthen the Armed Forces of the Philippines

However, the entire Black Hawk fleet and the newly acquired C-130 had to be grounded following the crash of two Air Force assets.

• Press the United States to return the Balangiga bells

The three church bells of Balangiga, which were seized by the colonizing American troops as war trophies in 1901, were back on Philippine soil one year and five months after the President mentioned them in his Sona. They arrived at Villamor Air Base in Pasay City on Dec. 11, 2018, then returned to Balangiga town in Eastern Samar days later.

On Dec. 16 that year, to mark the start of the “Simbang Gabi” or dawn Masses leading to Christmas Day, they rang again for the first time in 177 years at St. Lawrence the Martyr Parish church.

The bells have come to symbolize native cunning and courage in the Filipino-American War. Historical accounts cite their ringing in September 1901 as the signal for aggrieved Balangiga locals to carry out a planned uprising and attack a contingent of US troops, killing at least 48. The Americans retaliated by turning the town into a “howling wilderness,” with orders to burn homes and kill villagers old enough to bear arms.

The clamor to have the bells returned from the United States began in the late 1950s. Formal government efforts were initiated during the Ramos administration in the 1990s.

• No excessive salaries, allowances and bonuses across all GOCCs

In July 2017, President Duterte issued Executive Order No. 36 that suspended the compensation system put in place in 2016 by his predecessor, Benigno Aquino III.

An EO earlier issued by Aquino allowed government-owned and -controlled corporations (GOCC) to raise their officials’ salaries to a level comparative to that in the private sector, in line with the GOCC Governance Act of 2011.”

Mr. Duterte, however, justified his suspension order by citing a “need to… eliminate excessive, unauthorized, illegal allowances, incentives and benefits.”

In the 17th Congress, the House of Representatives passed on third reading a bill that aims to streamline government functions, consolidate or abolish redundant agencies, and scale down projects already undertaken by the private sector or local governments. The bill, however, failed to gain traction in the Senate.

In the current 18th Congress, 12 “rightsizing” bills are pending at the committee level in the House, while one similar bill has been filed in the Senate.

• Act on complaints received through hotlines 911 and 8888

Hotlines 8888 and 911 were both opened in August 2016, less than a month after President Duterte mentioned them in his first Sona (2016). The executive orders that institutionalized the 8888 hotline for complaints on government services and the 911 hotline for emergency response were signed later in October 2016 and in May 2018, respectively.In 2019, the Department of the Interior and Local Government reported that of the 18.5 million 911 calls received that year, the majority were either prank calls (2.5 million) or incomplete calls (9.7 million). Only 37,440 calls were listed as legitimate emergencies, while 16,763 were nonemergency calls and 6.2 million were categorized as “other calls.”

The Commission on Audit, in a performance review in 2019, said the 8888 Citizen’s Complaint Center, which was expected to handle 240,000 calls, attended to 646,658 complaints. However, the figure did not include the 792,685 calls abandoned while in queue or did not reach the call takers after going through interactive voice response.

A bill restoring the death penalty was passed by the House during the 17th Congress, but it has stalled in the Senate.

In last year’s Sona, the President pushed for the reinstatement of the death penalty for the third time, now specifying lethal injection as the mode of execution for condemned drug convicts. The House committee on justice then immediately moved to tackle 13 bills that were pending in the 18th Congress. The Senate, which now considers the revival of capital punishment a legislative priority, has 10 related bills pending at the committee level.

—With a report from Isaac Camarillo, Inquirer Intern