30 Lumad students graduate, move up at Bakwit School at UP 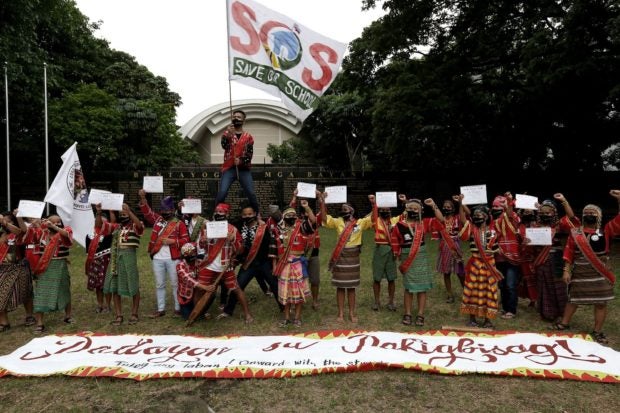 BEACONS OF HOPE “Lumad” students show their certificates of graduation during the graduation ceremony of the University of the Philippines Bakwit School a the Bantayog ng mga Bayani in Quezon City. —RICHARD A. REYES

MANILA, Philippines — Thirty Lumad students may have finished another school year, which was marked in a graduation ceremony on Saturday at the Bantayog ng mga Bayani, but their fight for their education continues.

“Today is the final march of the Bakwit [School]. We will return to Mindanao, but it does not mean that we are surrendering. We will come home to defend our land,” said Chricelyn Empong of the students from the indigenous communities who moved to Manila to escape an armed conflict that forced their schools to shut down.

Empong was among the 11 Lumad students who finished Grade 12 at the Bakwit School at the University of the Philippines (UP) Diliman.

But their long journey continues as they will march back to their militarized communities for the next school year, though having a school back at home is still uncertain.

Despite this, these 30 students will serve as beacons of hope in their indigenous communities, said Rose Hayahay, a volunteer teacher.

Tony La Viña of the Ateneo School of Government said their graduation was an inspiration and a lesson that one should persist despite the challenges.

During the pandemic, the two other remaining Bakwit schools in Davao and Cebu were shut down.

“When we return, there will be no guarantee for our safety. I know that when we come back we will be subjected to harassment, just like before we came here. Despite this, I believe that these students are brave, strong and they can stand up for their rights,” Hayahay told the Inquirer.

Like her teacher, Empong said coming home would also be uncertain for her fellow students. Their parents, she said, were being subjected to harassment, and they expect the same kind of welcome from authorities. Lumad schools were also accused of teaching students subversive ideas that were supposedly against the government.

The students from different indigenous communities in Mindanao had faced many threats and have waded through the wilderness on their march for education in the past years. But 2021 proved to be more challenging because of the pandemic.

Like all schools in the Philippines, classes shifted to modular and online learning — a big learning curve for Lumad students who have been left at the fringes.

Still, the students had support from UP and other nongovernmental organizations. They also received gadgets as donations to help them cope with school, Hayahay said.

Datu Benito Bay-ao, who spoke at the ceremony, thanked the organizations and individuals who have helped the students get through high school.

The elderly Lumad was among the seven people arrested in a Bakwit School in Cebu for supposed kidnapping and illegal detention, child abuse, and human trafficking. Prosecutors junked the complaint, citing insufficient evidence earlier this year.

“It hurts that only a few remain out of the 10,000 Lumad students. But I am still thankful that there are still those who persist. They give us strength to carry on and remind us not to be afraid,” he said during the ceremony.

While the Lumad schools in their communities were shut down, the elder Lumad said that he would never lose hope that this time, they have many people on their side.

The graduation ended with the 30 Lumad students dancing in front of the Wall of Remembrance, a black granite bearing names of martial law heroes, along with their foster parents and the people who supported their fight for education.